According to Hindu Mythology  , Narasimha Avataar   is fourth one. The hindu people praises Narasimha Avataar in various forms. Out of them the most specific and rare form is Gandabherunda .As per mythological Texts the Ganda berunda form described as two headed bird. The anger &ferocious form of Lord Gandabherunda Narasimha is two headed bird while calm & peaceful form of Lord Ganabherunda Narasimha is Single headed bird. This form appears as Maha Garuda I.e Great  Eagle.  Some of the Hindu devotees,worships the Lord Narasimha in the form of 8 faces Gandaberunda which is called as "Astamukha Gandaberunda".The Eight forms of "Astamukha Gandaberunda" is (1)Gandabherunda Pakshi Raja (2)Nrisimha Mrugaraja (3)Maha vyaghra (4) Hayagriva (5) Adi Varaha (6) Aghora Vaanarendra (7) Maha Garuda (8) Bhalluka


The Ganda Berunda took physical form in the Narasimha,after Narasimha has slain the demon Hiranyakashyapa, through the taste of blood, Narasimha did not let go of his dreadful form and the demigods were even more afraid from the supreme lord now, than before the demon. Shiva, the best friend of Vishnu, thus incarnated himself as Sharabha a part-lion and part-bird beast. With his Wings, representing Goddess Durga and Kali, he embraced Narasimha and pacified him. But out of Narasimha (Vishnu) emerged an even more fearful form: Ganda Berunda, having two heads, fearful rows of teeth, black in complexion and with wide blazing wings. The destructive energy of Narasimha (Vishnu) in the form of the two-headed bird, began to fight fiercely with Sharabha (Shiva) for eighteen days. After the eighteenth day, Narasimha (Vishnu) was finally able to overcome his infinite fierce energy, and regained control over it. In order to save the universe from Vishnu and Shiva's fiercest forms (Berunda and Sharabha), Vishnu stopped the fight.   Narasimha (Vishnu)  and Shiva finally transformed back in their  usual form

Maha Garuda Ganda Bherunda as Royal Emblem Of Andhra &karnataka Dynasties
As per history resources, the emblem of the Kota that of the chagis of Vinukonda  was Gandabherunda.It is engraved on the seal of Kota E.P.charter and also in some stone records. And GandaBherunda is a title in Kota Prashasthi. It has been said that the Kotas bore the figure of Ganda Bherunda on their breasts.This kota crest  was borne by Chalukyas and Hoyasalas and later on was the ensign of the Nandyala & Gobburi Chiefs.. The same Emblem has been adopted by the Odayaars of Mysore and is represented on their Royal seal.The banner of the Kotas had the Garuda i.e Eagle on it, and one of their epithets is Garudadwaja.At the top of an inscription, the Garuda is carved along with the Sun, cow with her calf, discus,conch,Hanuman and crescent.(The History Of Andhra Country II,by Yashoda Devi).


The Maha Garuda Gandabherunda is the seventh form of "Astamukha Gandabherunda" as said above.Worship of this face with the associated mantra frees one of NAga dosha, Naga bhaya, visha bhaya, pitrvi dosha and also frees from all domestic problems such as Runa Vimochana  Etc. This has been personally experienced by this author.

The Author Manavu is Founder of these Ashramam as well as Founder Trustee of Sri Lakshmi Narasimha Swamy Temple, Garlavoddu (v),Enkoor (mandal),Khammam (Dist),A.P, India. This year i.e on 08-05-2012,while he conducting Homam (ritual fire),as a part of Brahmostavams, At Temple, Lord Lakshmi Narasimha appeared as Maha Garuda Ganda Bheruda In Homam .This Is clear with following picture. 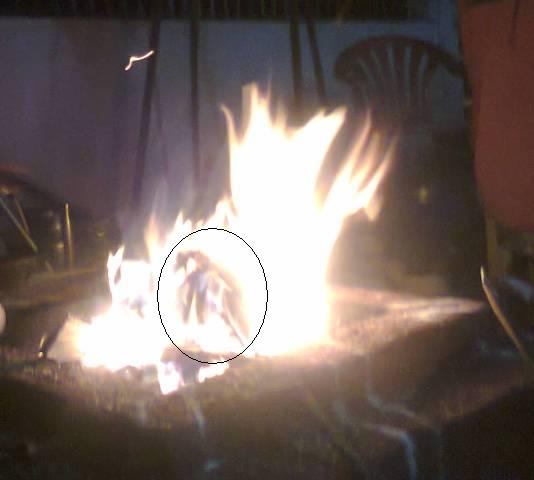