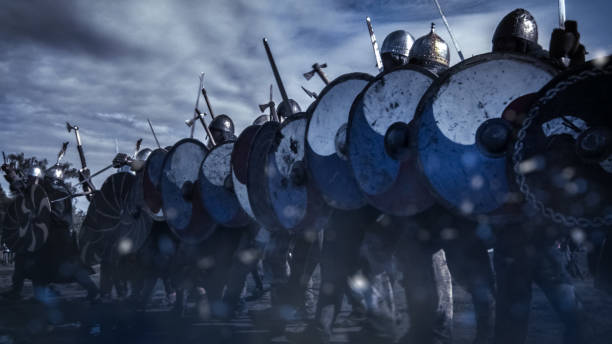 We find ourselves right now as the church of Jesus Christ in the west under great pressure, from hostile culture, and constant struggles with sin and desperate attempts to win the lost of this country to Christ.

It’s very tough, the battles we’re in right now.  And I feel that the battle is only just beginning.  It reminds me of the times of Gideon.

It says in Judges 6: 1-3,6, “The Israelites did evil in the eyes of the Lord, and for seven years he gave them into the hands of the Midianites. 2 Because the power of Midian was so oppressive, the Israelites prepared shelters for themselves in mountain clefts, caves and strongholds. 3 Whenever the Israelites planted their crops, the Midianites, Amalekites and other eastern peoples invaded the country.  6 Midian so impoverished the Israelites that they cried out to the Lord for help.”

So things were bad in Israel during this time.  The nation had seen all these great works of God, and had followed God faithfully, but then over the next few generations, their children and grand-children had forgotten about God. They had all their needs met, so they started to do evil, and practice sin. Troubled times came as a result.

Gideon, this young man, was hiding in a wine cellar, threshing out his crops, to try to keep them hidden from the Midianites.  So he’s hiding, trying to keep his crops safe.  And a messenger from God appears to Gideon and declares to him, ““The Lord is with you, mighty warrior.”

I have many flaws, and many struggles in my personal life, but one gift God has given me, is that I see what people will be in the future.  When I look at you here, I see what you could be.  And I want you to begin to embrace this idea as well.  Because God sees what we can and will be.  Do you see the same?  Do you see how different you will be in a year, or 5 years, if you continue steadfastly following the Lord?  God saw Gideon, hiding in a cellar, and saw the future in him, right at that moment, the potential, the victorious state of being a mighty warrior of God.  God saw the same in me 8 years ago, when he whispered to me, while I was sick one morning, before knowing Jesus, he said, “you will be a priest.”  And I laughed outloud. I remember I was at my dads house.  But God sees what we can be.  Indeed, what we will be.  Believe that God can take you from where you are now, to a whole new dimension.  That’s what God does.

So Gideon is called a hero. God commissions and sends him to defeat the Midianites.  Gideon asks for a sign and God gives him a sign.  Then from Judges 6:25-27: 25 That same night the Lord said to him, “Take the second bull from your father’s herd, the one seven years old.[b] Tear down your father’s altar to Baal and cut down the Asherah pole[c] beside it. 26 Then build a proper kind of[d] altar to the Lord your God on the top of this height. Using the wood of the Asherah pole that you cut down, offer the second[e] bull as a burnt offering.”27 So Gideon took ten of his servants and did as the Lord told him. But because he was afraid of his family and the townspeople, he did it at night rather than in the daytime.”

So one of the chief reasons that God was so upset with Israel is that they were worshipping false gods.  So the first task God gives Gideon is to tear down these false gods.  And Gideon does so.

And the towns people are very upset, they want to kill him, but his father protects him.

My second point is this: You’ve got to cut down the Asherah pole and the Baal worship in your life.

Some things in your life have to change, for you to proceed forward into God’s glorious future for you.  Sometimes we try to march forward into that beautiful future without cutting down the Asherah pole. We’ve got to start there, by dealing with the sin and removing it.  God helps us to do this.

Next, Gideon sends word out to gather an army to protect Israel.  He’s planning, he’s setting goals, and God is with him.  So Gideon is able to gather this massive army of 32,000 men.

So maybe we’ve realized we’re mighty warriors. We start planning. We start working on our issues. We start to develop new goals and plans and dreams. We start achieving victories, good jobs, college, service in ministry, and so on.

So we expect, alright, we’re gonna gather all this strength and intelligence and ability and conquer our dreams.  We’re gonna overcome through our own strength, our own abilities.

For me, I expected Owosso salvation army to suddenly burst forth to have like 100 members, 200 members and more.

But God doesn’t work that way.  He says to Gideon, you have a problem Gideon, the problem is your army is too big.  Too big!? That goes against everything we might think, and everything we would plan to do.  We’ve  got all these ideas about what we’re going to do, and how we’re gonna do it, and where we’re gonna serve and God walks over and throws all that paperwork off the table, and says no, you’ll do it my way.

Why? Because if we did it this way, with force, and all these huge numbers, we’d start to think we did it ourselves and become prideful, which is destruction.

So God gives various instructions, for some of the men to leave if they are afraid, others to leave if they don’t keep watch well enough, and eventually Gideon’s army is down from 32,000 to 300.

Judges 6:8-12, 16-23 says, “Now the Camp of Midian lay below him in the valley. 9 During that night the Lord said to Gideon, “Get up, go down against the camp, because I am going to give it into your hands. 10 If you are afraid to attack, go down to the camp with your servant Purah 11 and listen to what they are saying. Afterward, you will be encouraged to attack the camp.” So he and Purah his servant went down to the outposts of the camp. 12 The Midianites, the Amalekites and all the other eastern peoples had settled in the valley, thick as locusts. Their camels could no more be counted than the sand on the seashore.”

“He returned to the camp of Israel and called out, “Get up! The Lord has given the Midianite camp into your hands.” 16 Dividing the three hundred men into three companies, he placed trumpets and empty jars in the hands of all of them, with torches inside.

17 “Watch me,” he told them. “Follow my lead. When I get to the edge of the camp, do exactly as I do. 18 When I and all who are with me blow our trumpets, then from all around the camp blow yours and shout, ‘For the Lord and for Gideon.’”

19 Gideon and the hundred men with him reached the edge of the camp at the beginning of the middle watch, just after they had changed the guard. They blew their trumpets and broke the jars that were in their hands. 20 The three companies blew the trumpets and smashed the jars. Grasping the torches in their left hands and holding in their right hands the trumpets they were to blow, they shouted, “A sword for the Lord and for Gideon!” 21 While each man held his position around the camp, all the Midianites ran, crying out as they fled.

22 When the three hundred trumpets sounded, the Lord caused the men throughout the camp to turn on each other with their swords. The army fled to Beth Shittah toward Zererah as far as the border of Abel Meholah near Tabbath. 23 Israelites from Naphtali, Asher and all Manasseh were called out, and they pursued the Midianites.

So God worked in a mighty way through Gideon.  And Gideon’s part was to be obedient to God’s commands throughout the ordeal.  We might think God wants us to balloon like a mega-church or gather great power and defeat the evil one, but interestingly enough, God’s power is at work in weakness. Because that’s how God reveals his glory. And we know then, 100%, that it wasn’t us, or our brilliant ideas, it was the Lord, who granted the victory.

Our part is to march out, and believe God, and trust God at his word.  He calls you a mighty warrior, a hero of the church. You may not feel that way now, but if you pursue God, and get to work in your life.  You will one day like Gideon have those victories, and be that hero you dreamed you would one day be.

Dream brothers and sisters. Dream of the day a year from now, 10 years now, when you will be all up in shining armor fighting for the Lord, and watch the Lord declare the victories in your life.

They didn’t even have to fight in the battle. But they did have to be faithful and God gave the victory.  May we do the same in our lives as Christians.

HOW TO TEACH YOUR CHILD TO SWIM