Speculations about Hell: What will Hell be like according to NDE/Visions/Testimonies? 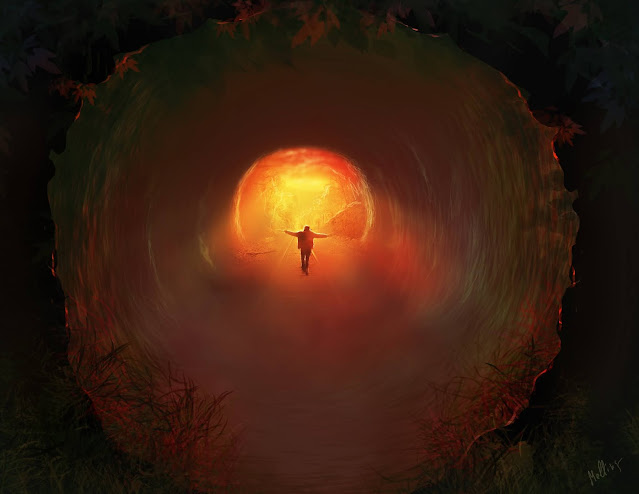 We're going to be looking at possibilities about Hell, according to near death experiences, visions and testimonies shared by those who claim to have personally seen these places.  I'll share sources at the bottom of the post.

The EIGHTH issue #2 Review I More act…
Tomcat Tompkins – Part 9
On Death and Subculture
What is Depression and Why Do I Have …
Aliexpress fashion product review: my…

Scripture tells us a fair amount about hell. We hear from Jesus that we should rather cut our arm off and throw it aside if it causes us to sin than go with both arms into hell (Matthew 5:30).  That's very severe. A good reminder as well.

We see the scripture about the rich man and Lazarus, in which the rich man goes to hell and Lazarus is in heaven, and we see that there is no rest, or water or peace in hell, and you can also actually see heaven from hell (Luke 16:19-31).

There are numerous scriptures about hell, some tell us of fire, others talk of outer darkness, perhaps these are differing regions of hell (Matthew 8:12, Matthew 22:13, 2 Peter 2:17, 2 Peter 2:4). We hear of course about worms that work their way through your body in hell, devouring you (Isaiah 66:24). We hear about how you are alive in hell, and you can't ever die.  Makes sense, given we're immortal being.

In any case, these are some details about how from numerous testimonies I've read, listened to, and watched about people who had experiences where they saw God.  I would encourage you to test all these accounts against the timeless word of God.  And if anything goes against God's word, then it shouldn't be considered a reality. Then again, if it doesn't go against God's word, then perhaps indeed it is quite true.

First, we see the aspect of fire in hell. Apparently each person in hell is burned continuously (Matthew 25:41).  This would seem to be an affect of the wrath of God against sinners who rejected Jesus.

Apparently, people in hell are not able to die, so they will burn up in the flames, or be tormented by demons, and the grace of God will reform their body again whole, and then the process starts all over.  Terrifying.  You can never die.

Testimonies indicate, and this is common with almost every hell testimony, is that they constantly remember times on the Earth in their prior life when people witnessed to them about Jesus, and they didn't listen, or rejected them, and told them to go away. Every opportunity they had to receive Jesus is played before them consistently.

Another universally consistent factor of about testimonies of hell is they indicate that all their senses are stronger in hell. Like you can feel things much more deeply in hell (the same also seems to be true about heaven.)  Senses are heightened, so you are able to feel the torment much more deeply.  And the pain can be much more extreme, because on Earth when you are in pain eventually you'll pass out. The body has a protective mechanism to shut off temporarily if we're in extreme pain, but there is no such possibility in hell. The pain will be terrible, beyond imagining.  Not trying to scare you, just writing out what I've read and studied.

Apparently there are numerous different sections of hell, and a person is sent to the area of hell that corresponds to the worst sin or most common sin they committed in life.  So, if they were an alcoholic primarily, they'd be sent to that section of hell. If they refused to forgive others, there's a section of hell for that.  Same with sexual immorality, or homosexuality, or lying, or stealing, or killing, or witchcraft, there are apparently areas of hell where the torments fit the crimes committed in the previous life.

Every single hell testimony I've ever read mentions this, that you are aware painfully that you can never escape hell. It's clear that the door is closed, there is no more opportunity for repentance in hell, and God's judgment is set and final.  You can never escape, and you realize constantly that you'll be there forever, and you can never leave.  That must be one of the worst things about hell, that you realize there is no hope, that you'll be there forever.  It's hard to even comprehend but, a million years later you'll still be there.  Truly scary stuff!

Another interesting factor about hell is that you still have your natural desires, to sleep, to drink water, to eat, and so on. But these base desires are never satisfied in hell. Which explains why the rich man cried out to Lazarus asking for just a drop of water, because he was so thirsty.

Additionally, I've read numerous accounts that indicate that any infirmities that you had in the past life, you'll continue to have in hell. If you were in a wheel chair on Earth, you'll be in a wheelchair in hell.  Of course we know the exact opposite is true about heaven, all our earthly infirmities will no longer exist. We'll be healthy and whole. But in hell, you arrive with the same health problems you had on Earth. How terrible is that?

One almost universal factor of hell shared in these testimonies is that demons are in hell, and they torment people. They apparently mock you and make fun of you and laugh at you, and say things like, "You could've had Jesus, but we deceived you" and "You're in hell and you can never get out, you'll be here forever being tormented by us." I've heard some very horrific stories, that they have long nails and they're huge, like 20 feet tall, and they will rip you apart, rip off your arms, rip off your legs, and just torment you in every way you can imagine.  Truly the most horrifying and terrifying accounts about what demons do, it makes me tremble with fear at our God and His power.

I've read that people are constantly crying out in hell, so if you do end up in hell, you'll hear people screaming and crying, but from what I can tell, you are alone in a cell.  But then again, there are other accounts that tell of people together, in fire, or people piled on top of each other, so perhaps it depends on what section of hell you would end up in. I've also read that if people in hell influenced others toward hell, when those people come to hell as well, their torments are increased by the presence of those people.  That could explain why the rich man in the parable begged God to send people to preach to his family members to save them. He probably wanted to avoid the additional torments that would come to him in hell if they arrived there.  Very interesting.

But I want to tell you about something I saw when I was about 20 years old.  At this time in my life I was very messed up and troubled, I used drugs almost everyday, drank and smoked cigarettes, and cared only about myself, and sex, and getting whatever I wanted.  I remember one day in the morning I was sitting at my computer in my trashed room.  Then something happened.  Suddenly I couldn't see.  And I was super surprised and scared.  Then suddenly I was in this horrible place.

I wish I could properly describe what it was like... It was total darkness. So incredibly dark.  I couldn't see anything.  I was terrified I didn't know what was happening.  I tried to breath, but I couldn't breath.  That scared me even more. Imagine trying to draw a breath and you can't. So I was like, suffocating.  I felt this horror come over me. And this pain roaring throughout my whole self, though I didn't even have a body, it was just my spirit in this darkness. I couldn't move.  It all welled up inside me to this incredible horror and I screamed as hard as I could.  But as soon as I tried, I couldn't scream.  There was no air and I had no voice.  So I couldn't even scream. The realization came to me that I didn't have any blood, as soon as I'd arrived there all my blood had turned to sand. And that "life" that's in the blood was just gone, blinked out. And I felt myself just crying as hard as I could, but I couldn't cry, I couldn't do anything. It was so dark and terrifying. And I felt this agony, this pain that was unbearable. I felt like an emptiness, like I'd become nothing, like I just sat there trying to scream, on fire with pain, but could get no air to even scream. So I screamed with my whole spirit and body. Then suddenly I was back, in my room.  And that was it.

I don't know if that was the punishment I might've come into in hell, or if that's the punishment reserved for those who are called to be pastors who refuse the call and serve evil.  Because today I'm a minister, and I've obeyed God's call. But I'll never forget what I saw for those few moments in my room when I was 20.  It sticks out in my memory.

One interesting tidbit about hell is that some have said they can see heaven from hell, and can see all that they lost out on.  And I've even read some testimonies that say there is a place in heaven where you can visit and look down and see the people in hell.  Quite fascinating.  In any case, the best antidote to all this, is to remind us that we must turn away from our sins and put out faith in Jesus Christ.  We must give our lives to His service, and live pure lives. I've met people who say their biggest reason for turning to Jesus was because they didn't want to go to hell. For some it's the love of Jesus, or the beauty of the life of Jesus, or the greatness of God, or the evidence for God's existence, but I regard the desire to not go to hell as a perfectly valid reason to turn to the love of Jesus.

If you're reading this now, the door is still open for you.  It's open right now.  Don't go to hell. God never desired any human to go to hell. It was originally made for the angels that rebelled against God with Satan.  Turn to Jesus Christ, get yourself a Bible, join a good Bible-believing church, and begin your new life as a Christian. Today is the day of salvation!  Amen!

23 Minutes in Hell by Bill Wiese

A Divine Revelation of Hell by Mary K. Baxter

Heaven is so Real by Choo Thomas

What is Depression and Why Do I Have It?

Speculations about Hell: What will Hell be like according to NDE/Visions/Testimonies?