I started doing pretty heavy drugs at 19 and abused all of my relationships. I became resentful, disrespectful to woman, and angry. I became distant to everyone who loved me, and I was hiding behind a shell of a person I had become. I felt like I could never turn it around.” 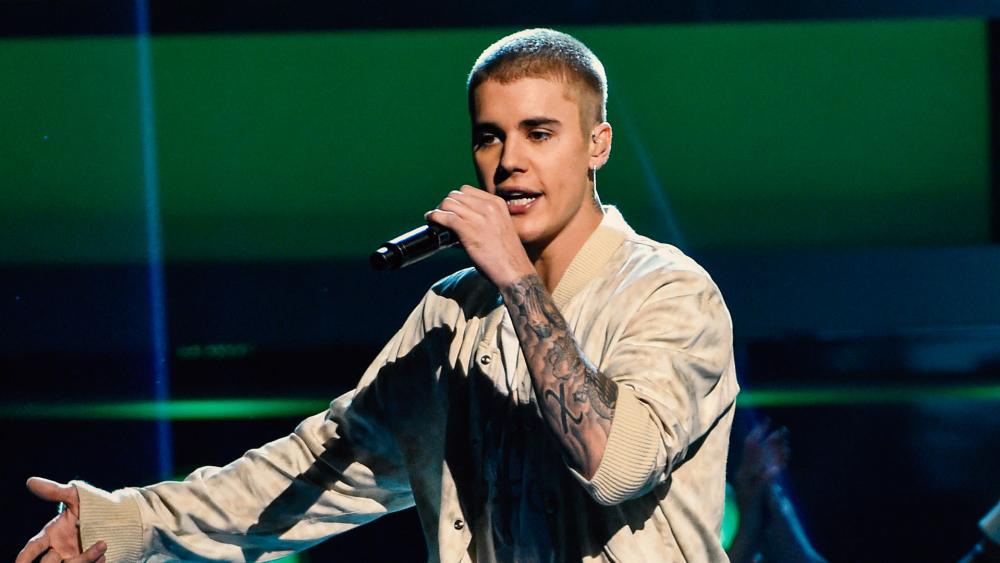 Justin Bieber, the musician who made millions putting words to music, took to Instagram on Monday to share his testimony – a message of heartbreak and hope.

At the core of the Sept. 2 message was the redeeming power of Christ, which he said saved him from a life of rebellion, addiction and deep depression. The post to his 118 million followers was raw and unpolished, a stark contrast to the veneer images carefully crafted by most celebrities. The typos, spelling and grammatical errors seemed symbolic of a life punctuated by high-profile mistakes and bad choices.

Justin Bieber: I Am Not Ashamed of My Savior Jesus Christ

“It’s hard to get out of bed in the morning with the right attitude when you you are overwhelmed with your life [,] your past, job, responsibilities, emotions, your family, finances, your relationships,” his post began.

“When it feels like theres (sic) trouble after trouble after trouble. You start foreseeing the day through lenses of ‘dread’ and anticipate another bad day. A cycle of feeling disappoint after disappoint. Sometimes it can even get to the point where you don’t even want to live anymore. Where you feel like its never going to change..[.]I can full[y] sympathize with you.”

The pop star then expressed his gratitude for the people in his life who have continuously encourage him before reminding his followers that material things did not fulfill him, and they won’t fulfill them.

“You see I have alot (sic) of money, clothes [,] cars, accolades, achievements, awards and I was still unfulfilled,” he asserted.

“Have u noticed the statistics of child stars and the outcome of their life? There is an insane pressure and responsibility put on a child whose brain, emotions, frontal lobes (decision making) aren’t developed yet. No rationality, defiant, rebellious, things all of us have to go through. But when you add the pressure of stardom [,] it does something to you that is quite unexplainable,” Bieber said.

The post then shifted to the difficult transition he had facing the fawning of instant stardom as an adolescent. 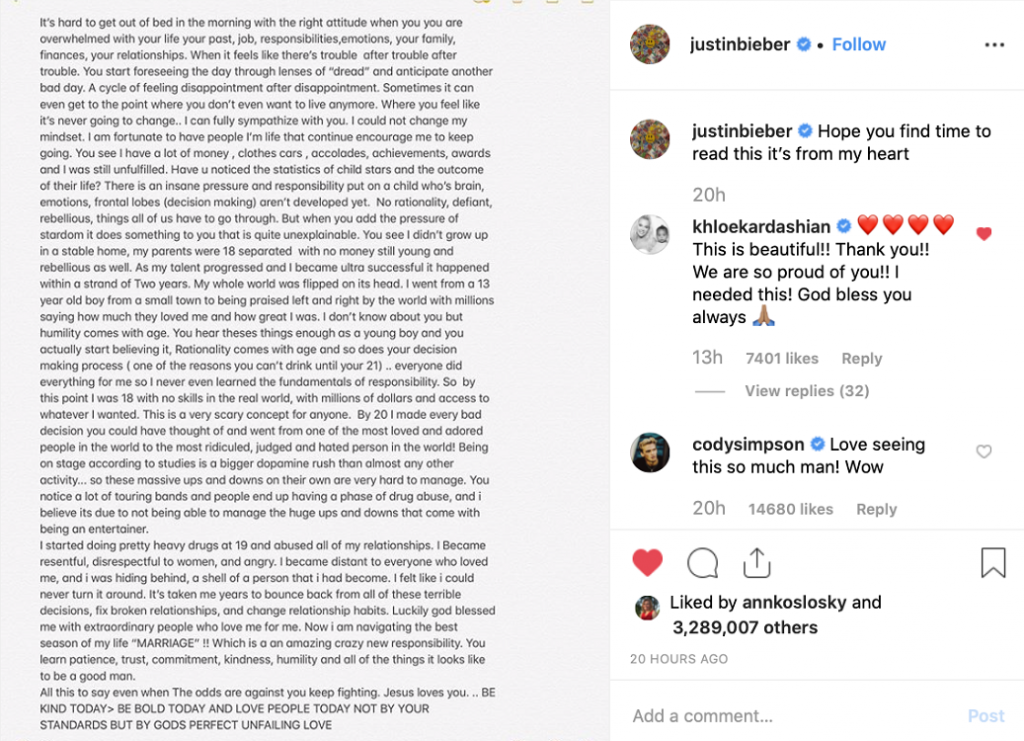 Bieber noted that he did not “grow up in a stable home” as his parents were 18-years-young and separated when he came along. He recalled that they had “no money” and were “still young and rebellious.”

When he received fast fame at the age of 13, his “whole world was flipped on its head.”

He said, “I went from a 13-year-old boy from a small town to be[ing] praised left and right by the world with millions saying how much they loved me and how great I was.

“I don’t know about you [,] but humility comes with age. You hear theses things enough as a young boy and you actually start believing it, Rationality comes with age and so does your decision making process (one of the reasons you can’t drink until your 21), everyone did everything for me so I never even learned the fundamentals of responsibility.”

By the time Bieber became a legal adult, he said his life was beginning to spiral.

“So by this point I was 18 with no skills in the real world, with millions of dollars and access to whatever I wanted. This is a very scary concept for anyone.

“By 20 I made every bad decision you could have thought of and went from one of the most loved and adored people in the world to the most ridiculed, judged, and hated person in the world!”

‘Contentment Is Not Found In A Place; But In A Person, And His Name Is Jesus Christ’: Justin Bieber Shares

He continued, “Being on stage [,] according to studies [,] is a bigger dopamine rush then almost any other activity…so these massive ups and down on their own are very hard to manage.”

Bieber admitted that he began managing the rollercoaster by doing “heavy drugs.”

“You notice a lot of touring bands and people end up having a faze of drug abuse, and I believe its (sic) do to not being able to manage the huge ups and downs that come with being an entertainer. I started doing pretty heavy drugs at 19 and abused all of my relationships. I became resentful, disrespectful to woman, and angry. I became distant to everyone who loved me, and I was hiding behind a shell of a person I had become. I felt like I could never turn it around.”

The 25-year-old noted that it has taken him years to “bounce back” and mend broken relationships.

Noting that “Luckily god (sic) blessed me with extraordinary people who love me for me.” 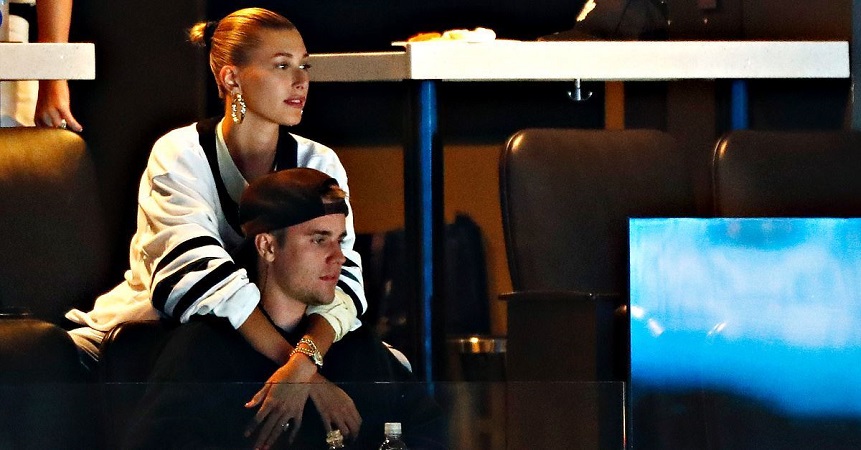 Among those people was a pastor from New York City’s Hillsong Church. Raised by a Christian mom, Bieber accepted the faith on his own terms in 2014, when the Hillsong pastor baptized him in the tub of an NBA player, according to the British publication, Premier Christianity.

The following year, Bieber told Complex, an online magazine covering youth culture, that he was “gonna use my voice for a reason” and that he wanted to “honestly live like Jesus.”

“[Jesus] created a pretty awesome template of how to love people and how to be gracious and kind,” he said.

“If you believe it, he died for our sins. Sometimes when I don’t feel like doing something, but I know it’s right, I remember, I’m pretty sure Jesus didn’t feel like going to the cross and dying so that we don’t have to feel what we should have to feel … We have the greatest healer of all and his name is Jesus Christ. And he really heals. This is it. It’s time that we all share our voice,” he asserted.

Another significant relationship was formalized on Sept. 18 of last year, when Bieber married Hailey Baldwin, the daughter of actor Stephen Baldwin, in a civil ceremony. The couple had been longtime friends who occasionally dated. The couple plans to have a religious wedding ceremony Sept. 30 in South Carolina, Bieber’s father-in-law confirmed, according to Christian Headlines.

As the Instagram post came to a close, Bieber’s dire tone changed dramatically as he attributed his new life to his two loves, Jesus and his wife.

“Now I am navigating the best season of my life “MARRIAGE” !! Which is an amazing crazy new responsibility,” he proclaimed.

“You learn patience, trust, commitment, kindness, humility and all of the things it looks like to be a good man. All this to say even when the odds are against you [,] keep fighting.”

The post Justin Bieber Thanks Jesus For Saving Him From Addiction And Severe Depression appeared first on Believers Portal.