On the Ides of March, Tony Robbins did one of his pricey "Unleash the Power Within" events in San Jose. What he unleashed instead was a firestorm. Right after the event, video surfaced of Robbins mansplaining the perils of the #metoo movement to a sex abuse survivor. It quickly disappeared, most likely quashed by his team. Their damage control effort seemed to be working... until it wasn't.

Late last week I noticed that the video had resurfaced. The original footage is taken from a distance and it's a little hard to make out, but a YouTube version is found here. A cleaner, edited version was
posted to Facebook here.

On Saturday Tarana Burke's scathing response to the video was published on the Huffington Post. In under 24 hours, after weeks of trying to bury it, Robbins finally addressed the incident publicly and issued an apology — something he swore in profane terms he would not do, during the altercation. (I think it bears mentioning that Robbins has enjoyed a lot of positive coverage on the Huffington Post, over the years, and a very friendly relationship with founder Ariana Huffington.)

“My comments failed to reflect the respect I have for everything Tarana Burke and the #MeToo movement has achieved,” Robbins said in the statement. “I apologize for suggesting anything other than my profound admiration for the #MeToo movement.”

“It is clear that I still have much to learn,” he added.


Robbins's apology has not gone over well and inspired scores of people to unfollow the self-help guru. 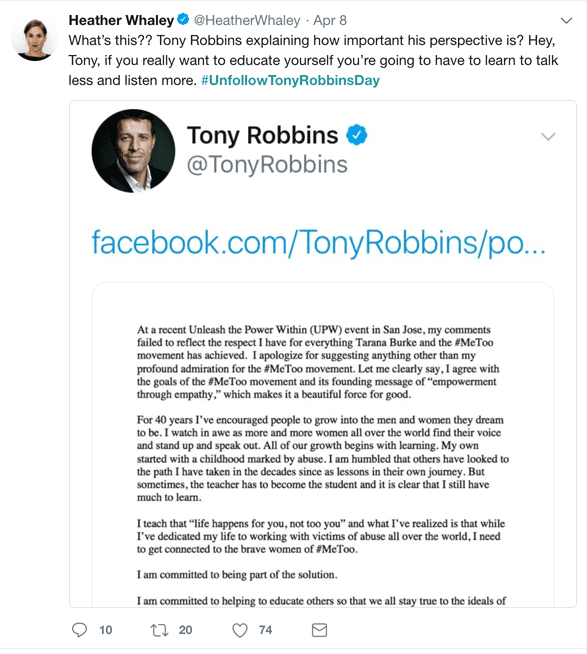 Shortly after the event, Vice interviewed Nanine McCool, the woman featured in the video, as well as other attendees. Their excellent write-up is here. McCool, a sex abuse survivor, stood up to tell Robbins he had the #metoo movement all wrong. Robbins pushed back... physically.

Of the pushing, McCool said, “I thought, 'OK, we're going to fist bump.' Then he started pushing me. I thought he wanted me to show how strong I could be and push back, but that's not what he wanted. He wanted me to move backward.” She went on: “[I was] thinking he's going to transform it into some kind of awareness. I don't know, it's Tony Robbins, there's going to be some lesson here that's gonna be useful to me. I initially started pushing back but he immediately pushed back harder. There was no way. He was going to knock me on my ass if I didn't step backward so I quit pushing against him, I just started walking backward. As long as he was pushing me, I was moving.”

Nine of the 11 attendees VICE spoke to brought up how Robbins’s larger size and his physical contact with her seemed almost intimidating. “He’s a very large man so she looks tiny next to him, and then he starts pushing her, not to be abusive but pushing her as an interaction,” recalled Logan Wick of Austin, who has been a follower of Robbins for eight years and has gone to four of his seminars. "In that moment, when you’re talking about #MeToo and you’re telling a woman and you’re pushing against her and you’re very large—no matter what size man you are, you shouldn’t be doing that in this context.” 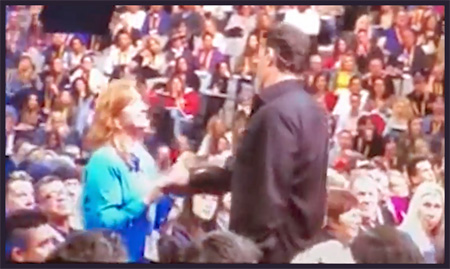 It is decidedly unsettling to see a 6'7" tall man pushing around a much smaller woman, especially in the context of that conversation. But his words were even worse.

As seen in the video, Robbins told her, “I’m not knocking the #MeToo movement, I’m knocking victimhood," and asked the audience to "consider what its impact is." He went on to say that "anger is not empowerment," adding, "Who should throw the stone? You shouldn't throw that stone if you live in a fucking glass house. Is there any one of us that hasn't done something that we prefer we'd not or that we're embarrassed by or that was hurtful even if we didn't intend it to?"

Sure. Nothing empowers survivors of sexual assault like telling them they shouldn't be angry, that they should feel Christly compassion for their rapists instead.

This is what psychologist John Welwood termed spiritual bypassing.

Trying to move beyond our psychological and emotional issues by sidestepping them is dangerous. It sets up a debilitating split between the buddha and the human within us. And it leads to a conceptual, one-sided kind of spirituality where one pole of life is elevated at the expense of its opposite: Absolute truth is favored over relative truth, the impersonal over the personal, emptiness over form, transcendence over embodiment, and detachment over feeling. One might, for example, try to practice nonattachment by dismissing one’s need for love, but this only drives the need underground, so that it often becomes unconsciously acted out in covert and possibly harmful ways instead.

But, by pushing around the much smaller framed McCool, Robbins was just making a point.

If you push someone else, it doesn't make you more safe. It just makes them angry.

In other words, don't make trouble for abusers. Be afraid of them, instead.

Next came his bizarre apologia for misogynists in high places.

I was just with someone the other day, very famous man, very powerful man, who's saying how stressed he is because he interviewed three people that day. One was a woman, two were men. The woman was better qualified but she was very attractive and he knew, "I can't have her around because it's too big a risk," and he hired somebody else. I've had a dozen men tell me this.

Apparently, stating that you've ever been a victim of a crime is not taking your power back from your perpetrator. It's not letting other victims know they're not alone in what they've experienced. It's not refusing to protect perpetrators with a cloak of secrecy. It's not refusing to cower in shame over something that happened to you. According to Robbins, it's all just self-indulgent "victimhood."

Robbins is smooth and he speaks the language of "empowerment" very well. But what he said in that exchange boiled down to some really disempowering ideas: Standing up for yourself somehow makes you a victim. Don't make bullies angry or you'll get hurt and it's your own damn fault. Don't be too pretty because your brain won't matter and you might get yourself raped. And whatever you do, don't try to be "significant."

And this is where the whole thing becomes downright confusing. Robbins's take-down of #metoo appears to have started as a homily on the cardinal error of seeking "significance."

If you use the #metoo movement to try to get significance and certainty by attacking and destroying someone else then you haven’t grown an ounce, all you’ve done is basically use a drug called significance to make yourself feel good.

But according to Robbins, "significance" is one of six "core human needs." He has warned that placing too high an emphasis on "significance,"at the expense of other needs, causes problems. But this is entirely different from calling it a "drug."

I claim no real familiarity with Robbins's work. I'm not a fan, so it's entirely possible that I'm missing some fine points in his "core needs" framework. But there is something acutely disturbing about telling survivors of sex crimes that if they stand up for themselves and against their assailants, they should stop trying to be "significant." It kinda sounds like he's telling them that their concerns, their injuries, their voices, their very personhood, are insignificant.

I realized something else, when I first saw this video. My lack of familiarity with the Robbins corpus, caused me to miss that Teal Bosworth Scott Swan has plagiarized him, too, much as she did John Welwood (see above) and so many others. I noticed it because I was equally mystified by her schizophrenia on this whole "significance" thing. She also seems to toggle back and forth between stating that "significance" is a central human need and discounting people's quest for "significance" as kind of pathetic.

I first became aware of teal's ideas on "significance," such as they are, when she was making her impassioned plea for "virgin killer" Elliot Rodger, as discussed in the noncast here (page search: devil). In her blog post on the Santa Barbara shooting, she wrote:

These mass shooters are in fact reacting against the pain of the rejection they felt from one or more of their primary caregivers.  They did not get the affection or attention they needed.  Because of this, they lack two of the most primary human needs, loving connection and significance.

How there could be two first needs is one of those mysteries of tealmath that will probably never be resolved. But at the time I wondered where her "primary human needs" idea came from. Note that she does not cite Robbins or anyone else. She just states it as a fact, as she does with so many of her unsourced, unsubstantiated opinions. A quick scan of her site shows that she has plagiarized his model on many occasions, like in her contemptuous take-down of humility, here and here. Worse still, she plagiarized his entire list in her article "Relationships and the Six Human Needs." Yes, there are six of them, just as Robbins laid out. She's tweaked a couple of the item names, changing "uncertainty/variety" to "variety,"  "growth" to "expansion," and "connection/love" to "love." Aside from this sleight of hand, it's the exact same list that can be found here, and in multiple articles by Tony Robbins, or crediting him.

But after stealing Robbins's work outright and using it to justify mass murder, teal, like Robbins, has made numerous dismissive and derogatory comments about the "need" for "significance." For instance, there was her exegesis on why religion is terrible, in her teacast on death (page search: death). And then there was her scathing commentary on all those other new age whack-jobs who try to connect with angels, in the tea thing on spirit guides (page search: drunks).

There is something really troubling about two people who have pursued fame as actively as teal and Robbins (who has actually achieved it), criticizing other people for wanting to be "significant." Tony Robbins was insulting people for wanting "significance" in front of an audience of about 12,000, who had paid up to three thousand bucks, for the privilege. That he does not see the irony!

Let us also consider the irony of a man like Tony Robbins claiming that women are using "the drug called significance". Please. The dude is a self-positioned guru who thrives on fame, has starred in reality TV and trashy movies, puts his face on the cover of all his books, and regularly name drops his "powerful, famous" friends in public. How much more of the drug called significance can he possibly scoff down?