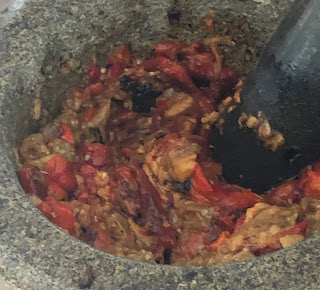 Like many of you, I had ajvar for the first time at the Golden Festival.  I had been thinking for many years that ajvar would be an ideal companion for matzo if I ever made it myself.  This year, for our Simple Yiddish with Elena class here at UM, I finally did.  Most recipes will call for blending the ingredients in a processor, but I have none here, so I pounded them in a molcajete, and the results are pretty wonderful.

Broil the Eggplants and peppers as if preparing Melitsano Matzo Pita.  Peel the vegetables and chop fine.
If using an ancho, toast it until puffed, and remove the stem and seeds. Tear into small pieces, place the pieces in a bowl and cover with boiling water.
Peel the garlic cloves, if using, and pound them in the mortar with a little salt (Or blend in the machine of your choice).  Drain the ancho, if using, and pound or blend with the garlic.  Add the eggplant and peppers, and blend or pound well.  Add vinegar and oil and adjust seasoning to taste.

Now you can use the ajvar as is, but it is even better if you transfer it to a saucepan and simmer for about half an hour on low heat to concentrate the flavors.


Rukhl and I have made a lots of things that would be quite at home spread onto a little matzo, and not half bad with raw celery, carrots, pepper strips, radish or turnip slices.
You will never tire of matzo as long as you have  . . .

Almond Chremslekh:  I say in this video that Chremslekh are mentioned by Rashi.  That is incorrect.  It was Rabbeinu Tam.

In this episode Ruklhl and I ponder the eternal question, are we thinking more about the holiday treats that we do get to eat, or all the khomets that we must do without?

A Tour of Yiddish Farm
White Beets and Spinach.  We did not intentionally make this episode for Peysekh, but it is Peysekhdik.

Borsht!  We make our year-round borsht with caraway, but just leave it out during Peysekh.  We also add lemon, which according to some traditions is just as problematic, because the Satmarer hoyf was once thrown into a panic by lemon seeds in the borsht.  The lesson is that traditional recipes must never be changed.

I think you can easily adapt the cheesecake for Peysekh

First Come, First Served: Meal Delivery Services That Save You Time and Money

Holiday Food & Wine Pairings for Every Course with Santa Margherita

Discover A Liberty Village Bistro Worth Shouting About

Cleveland Produce Distributors Taking Food Waste Into Their Own Hands

Turkish Food Dishes to Lick Your Lips For