How the Queen celebrated VE Day in 1945 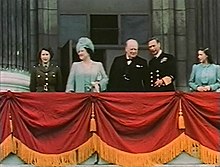 On September 6, 2015, Channel 4 broadcast The Queen’s Big Night Out, which told us about the one evening in her life when she was most able to be a member of the public. It was a fascinating programme and beautifully narrated by actor Allan Corduner.

Wuhan Weather Report
Who is running this show?
Queen eShun – Nonsense ft Medikal (Mp…
I Goth Work To Do ! (Fashion Edit)
BCH has Latent Potential to Rise by 1…

As soon as Prime Minister Winston Churchill’s 3 p.m. announcement that the Second World War had ended, the British public flooded into the streets to celebrate. That day, half a million people ‘poured into London’. Some travelled by train just to party in the capital.

After six years of war, one-third of a million of Britons had lost their lives. Three-quarters of a million homes had been destroyed.

Although rationing would continue for another nine years, at least they no longer had to worry about heading for bomb shelters, a frequent occurrence in London.

On VE Day, Britons heard the first radio weather forecast in years. These had been suppressed for security reasons.

Street lamps, neon signs and house lights lit that night startled many Britons who had become accustomed to total darkness. The lights-out measure was also for security purposes, to try and keep German pilots from finding their targets.

Crowds in London flooded The Mall, waiting for George VI and the Royal Family to appear on the balcony of Buckingham Palace. The King gave a radio address about the war coming to an end. He and Queen Elizabeth (later the Queen Mother) appeared on the balcony to rapturous cheers.

Pubs stayed open late that night. Some ran out of beer. People, even total strangers, hugged and kissed each other. Dancing went on everywhere. It was ‘mayhem in the nicest of ways’.

On VE Day, Princess Elizabeth was 19. Princess Margaret was 14. They had spent much of the war at Windsor Castle. 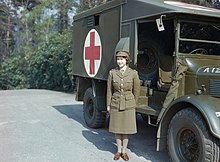 Margaret Rhodes, 89, one of the Queen’s cousins and her close friend, recalled that Princess Elizabeth was privately tutored there by the headmaster of nearby Eton. Princess Margaret was envious that she was not afforded the same privilege.

Princess Elizabeth went on to serve in the ATS (Auxiliary Territorial Service) with the rank of Second Subaltern. She learned to drive and work as a mechanic.

The princesses’ night out

Margaret Rhodes, who was at Buckingham Palace that day, remembers that the princesses asked permission to leave the palace. The King was reluctant to allow his daughters to leave, however, he relented.

Sixteen members of the Royal Household accompanied the princesses, Rhodes and Jean Woodruff, who later became a lady in waiting, for a night in the streets of London. The Queen recalled in 1985 that she pulled her uniform cap over her forehead in an attempt to disguise herself until a military officer in the entourage said he was not going to accompany her unless she wore her uniform correctly. She adjusted her cap and the group left the palace.

They were able to see their parents on the balcony of the palace waving to the crowds. That was at 9 p.m.

The group managed to make their way down the Mall. By 10 p.m., they’d Reached Horseguards Parade, also teeming with people expressing ‘happiness and relief’.

Group Captain Peter Townsend was among those protecting the princesses. Princess Margaret was fascinated by him (their later romance was quashed), although his only intention was to ensure the safety of his Royal charges.

The entourage reached Piccadilly Circus at 11 p.m., just when the crowds were at their peak. This was the most boisterous area of central London. Knowing this, the group tried to stay on the outer edges but the force of the crowds pushed them ever closer to the centre.

Piccadilly Circus in the 1940s was not quite what it is now. Back then, prostitutes stood around the Eros statue and lit torches (flashlights) to discreetly show off their legs. Nearby newspaper vendors sold condoms. The Regent Palace Hotel (as was) charged for rooms by the hour.

The Royal party reached The 400 Club, by 11:15. It was a favourite of some in the group and was also known for its upper-class assignations. They didn’t tarry, however, and joined the conga line down Piccadilly going towards the Ritz. The future Queen was ‘just another face in the crowd, laughing and joking’.

When they reached the Ritz at 11:30, the Royal entourage continued to conga as they entered the hotel. Margaret Rhodes remembered it as a poke in the eye to the hotel’s clientèle, ‘so stuffy’. Their shock didn’t last long, however, as the princesses had to be back at Buckingham Palace by midnight.

They had a shock of their own at Green Park, however. It was 11:45 p.m., and couples were engaging in public displays of affection and sexual congress everywhere. Princesses Elizabeth and Margaret had never seen a couple kiss much less anything more. Used condoms were scattered on the ground. Some overly excited people inexplicably burnt deck chairs.

In an interview many years later, the Queen said that she had sent a message to her parents asking them to return to the balcony at midnight, so that she and her sister could see them from street level. The crowds were still outside the palace.

VE Day was the one time the Queen could let her hair down. It was her one night of relative freedom which she still remembers fondly today. Yes, she had a few drinks and danced with the public. However, she was still mindful of her status and was wearing her ATS uniform. Ultimately, she had to behave herself.

In the weeks that followed, Labour won the general election. Their government would establish the National Health Service and state provision for the needy.

This came as no surprise to the Queen. She knew people had become accustomed to centralised government and state control during the war years.

A few years later, when Princess Margaret reached majority age, she and her friends frequented the American Bar at the Savoy. Her sister, attended by ladies in waiting, sometimes joined them, always at 8 p.m. and, even then, only for a short while. The Queen was — and continues to be — above reproach in every respect.

How the Queen celebrated VE Day in 1945