The religious history of Cannes

Although we associate Cannes with film stars and opulence, the small city has a longstanding religious history thanks to the nearby islands of St Honorat and Ste Marguerite.

The two islands are known as the Îles de Lérins, or Lérins Islands.

Our hotel had copies of an excellent book called Cannes: Jewel of the Mediterranean, parts of which are summarised below with additional sources.

Before the Romans began building their vast empire of exploration followed by trade, a more ancient people who were part Ligurian (from the northern Italian Riviera) and part Celtic had explored and colonised parts of the European Mediterranean coastline.

On the two islands near Cannes, they erected a shrine to their goddess Lerina. Nothing more is known about this deity, and the Ligurian-Celtic people disappeared centuries before the Romans arrived.

The Ligurian-Celtic people also gave the city of Cannes its name. In their language, it was Kan, denoting a summit. Many centuries later, when the Provençal language was spoken, this summit was called Le Suquet, where the old part of the city remains today. However, Kan stuck and later became Cannes.

When the Romans arrived, they called the islands Lero (Ste Marguerite) and Lerina (St Honorat), for the Ligurian-Celtic deity.

Germanic tribes invaded the Western Roman Empire in the 5th century, and by 476, it came to an end when Romulus Augustulus abdicated to the warlord Odoacer.

Around a century earlier, a man named Honoratus from northern Gaul — present-day Germany — had converted to Christianity. Honoratus was thought to have been born around 350 AD to a Roman consular family. His parents provided him with an excellent education and he became a highly learned young man.

Around 368, he and his brother Venantius — also a convert — decided to tour the Holy Land, Egypt and Syria. Their guide Caprasius was a pious Christian and took other observant believers along with them.

Venantius died suddenly along the way in what is now Greece, and the group decided to return to Gaul. Honoratus stopped off in Rome then made his way to Provence. He happened to meet Leontius, the Bishop of Fréjus — originally ‘Forum Julii’ — who encouraged the young man to sail to the Lérins and pursue a life of holiness. 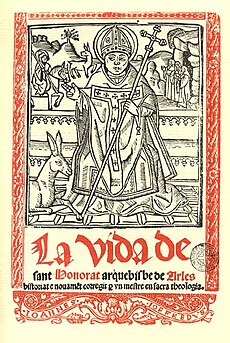 Legend has it that the Lérins were full of snakes at that period in time. Regardless, Honoratus was able to attract faithful Christian men to help him erect a monastery on the island that bears his name today. By the early 5th century, it was built and was the primary achievement of Leontius’s episcopacy. Leontius was later canonised. His name is Léonce in French, and his feast day is December 1.

Many men who were later canonised became disciples of Honoratus, including Hilary of Arles and Patrick, who studied there before he became Ireland’s principal evangelist.

The woodcut at left, courtesy of Wikipedia, depicts the cover of a book by Raymond Féraud about Honoratus’s life written in Provençal around 1300. Near the end of his life, Honoratus was made Bishop of Arles, hence the book title. Hilary of Arles succeeded him and is thought to have been a relative of his.

After Honoratus died, many pilgrims sailed to St Honorat to visit the monastery. The aforementioned book, written centuries later, confirms that his place in Church history was lasting and significant.

It should be noted that the monastery in its present form developed over the centuries.

Legend has it that Honoratus had a sister, Marguerite. According to the story, she became a nun and settled the neighbouring island, building a convent there.

She did so to be close to her beloved brother. However, Honoratus told her he would only visit her when a particular tree was in blossom once a year in March. The legend has it that Marguerite prayed fervently that the tree would flower more often, enabling her to see Honoratus more than once a year.

Her prayers were answered, and the legend says that Honoratus sailed to visit her twelve times a year.

In reality, this story probably came from the aforementioned Provençal book by Raymond Féraud.

It is more likely that crusaders settled the island and built a chapel dedicated to St Margaret of Antioch.

At the time of the first Millennium, there was not much to speak of in Cannes at that time. Only a few hundred people lived there then.

Historically, Cannes and the Lérins suffered from foreign invasions, mostly by the Saracens.

The general sentiment as the year 1000 approached was that a terrible apocalyptic fate would befall the area in the form of another foreign invasion.

I put that bit in bold because there are many who think that people were too ignorant to anticipate apocalyptic events around that time. Yet, history tells us otherwise.

Cannes: Jewel of the Mediterranean says that a local count owned the land at that time: Cannes and the Lérins. One of his sons, who became a monk and lived in community on St Honorat, inherited the two islands after his father’s death. He duly gave this land to the monastery so that it would be independent.

The book says that the count had fortified Cannes with a tower and château on Le Suquet — the summit. Other accounts say that the monks built those.

In any event, the area stayed safe during the time immediately before and after the first Millennium. The townspeople of Cannes believed the faith of the monks had kept them and the islands safe from harm. Therefore, they decided to place themselves under the protection of the monastery. This meant that the monks collected certain taxes from them during the year and imposed hefty fines for any infractions, such as unauthorised tours of the islands.

This dependence on the monks lasted until 1530 when Cannes became independent.

The islands were not meant to be peaceful for long.

Their strategic positioning attracted other invaders centuries later, including the Spanish in 1635.

At the time the Spanish invaded, Ste Marguerite no longer belonged to the monastery. The Duke of Chevreuse had purchased it in 1612 for strategic reasons. He built a fort — Fort Royal — on the island. France recaptured Ste Marguerite in 1637, and the government expanded the island’s development, building a barracks and state prison there.

In the 18th century, a small village developed on Ste Marguerite, which served the soldiers stationed there.

The prison closed in the 20th century and is best known for housing the mysterious Man in the Iron Mask, whose identity has never been verified.

When the Spanish invaded in 1635, they expelled the monks from St Honorat. The monks went into exile in Vallauris, not far from Cannes, and returned once France had liberated the Lérins.

Once reclaimed, the monastery suffered from later Spanish attacks. The Genoese also attacked the island.

In the 18th century, revolutionary fervour replaced religious faith on St Honorat. By the time the French Revolution took place, only four monks were left on the island. In 1787, the revolutionary government disestablished the monastery, took over ownership of the island and soon sold it to an actress, Mademoiselle de Sainval, who lived there for 20 years.

Fortunately, in 1859, the Bishop of Fréjus purchased the land so that a monastery could be re-established. A community of Cistercian monks settled there in 1869 and that religious order has remained there ever since.

In terms of religious discipline, St Honorat went from a monastic rule of Honoratus to a Benedictine one to the present day Cistercian rule, which also borrows from St Benedict.

Cannes and the Lérins have changed much over the centuries. Frequent ferries from the centre of town link the city to the islands.

Visitors interested not only in Christianity but also wine and food produced at the monastery will enjoy visiting St Honorat.

Some services and Masses are open to the public. Those seeking solitude and prayer can spend a quiet day surrounded by nature.

Those seeking more secular pursuits can take advantage of a tasting of the seven monastery wines, eat at the restaurant or bring their own picnic hamper.

Ste Marguerite is a mixture of public and private land.

The village still exists, and the owner of the Force India Formula 1 team owns a huge plot of land on the island.

That said, most of Ste Marguerite is known as a nature reserve and a destination for those who enjoy water-oriented sporting pursuits.

One can also tour the old prison, which now has a Museum of the Sea and a youth hostel.

Cannes remained a small fishing village until the 1830s.

In 1834 — some say 1835 — Henry Brougham, the 1st Baron Brougham and Vaux, was touring the Côte d’Azur in an attempt to find a place where his daughter Eleonora could find relief from her bronchial ailment. By chance, they stopped in Cannes, where the local hospitality they received was so cordial that they decided to stay.

The fresh air and sea breezes helped Eleonora recover, and he built a residence for her in town.

Lord Brougham told all his friends how splendid Cannes was. It was not long before they arrived in town and, like him, built their own residences either along the seafront or in the neighbouring hills.

By 1870, the town had been transformed into an English home away from home. Cannes’s development preceded Nice’s. It was thanks to Brougham that Nice’s main seafront thoroughfare became known as the Promenade des Anglais.

Brougham lived to see much of Cannes’s transformation from town to city, which probably gave him some cheer in his later years. He outlived his wife and two daughters, which must not have been easy. He died in the city in 1868 and is buried in the local Cimetière du Grand Jas.

European royalty and nobility flocked to Cannes during the middle of the 19th century. An important Russian community of that group also took root.

One French author who knew the area when it was a humble fishing village was appalled by the number, style and size of the foreign-owned villas. However, the English and other Europeans invited him to their parties. He was soon swept up into the new Cannes social swirl and never looked back. Those people became his best friends.

By the end of the 19th century, trains were stopping at Cannes and the city built a tramway to facilitate local transport.

From there, the city grew and grew. It became known as a playground for the wealthy and for film stars. The 70th Cannes Film Festival took place in May 2017.

Many years ago, Cannes erected a statue of Lord Brougham in its city centre. Brougham stands facing a fountain overlooking the sea. It’s a splendid reminder of a remarkable history.

I cannot think of a place on earth that has more to offer in every respect than Cannes. Put it on your bucket list. You won’t be sorry, as long as you visit at the right time.

The religious history of Cannes