You are not signed in as a Premium user; we rely on Premium users to support our news reporting. Sign in or Sign up today!
VATICAN CITY (ChurchMilitant.com) - Cardinal Gerhard Müller has acknowledged that Pope Francis personally halted a high-level investigation into clerical sex abuse.
In an interview with LifeSiteNews on Tuesday, Müller confirmed recent reports that just months into his papacy, Francis personally blocked an investigation into sex abuse allegations against U.K. Cdl. Cormac Murphy-O'Connor.
When asked if the Pope had intervened to halt the inquiry, Müller, former prefect for the Congregation for the Doctrine of the Faith (CDF — the body responsible for investigating abuse claims) said he was "bound by Pontifical Secret," but said that "the Pope's approval is required for investigations" of a cardinal. LifeSiteNews followed up by asking Müller if he could confirm whether the investigation was halted.
"Yes," the cardinal replied.
As archbishop of Westminster and president of the Bishops' Conference of England and Wales, Cdl. Murphy-O'Connor played a particularly key role in electing Bergoglio to the papacy.
The accusations against Murphy-O'Connor are traced to an English woman who claims she was abused by the cardinal as a teenager. Long after the abuse allegedly occurred, she filed a complaint with the CDF, and an investigation was launched.
In July 2017, Vatican expert Marco Tossati reportedthat, in June 2013, Francis demanded to meet with Müller, then head of the CDF, to quash a dossier on one of his allies — going so far as to order Müller's secretary to interrupt the cardinal while he was offering Mass:

The cardinal was celebrating Mass in the church attached to the congregation palace, for a group of German students and scholars. His secretary joined him at the altar: "The pope wants to speak to you." "Did you tell him I am celebrating Mass?" asked Müller. "Yes," said the secretary, "but he says he does not mind — he wants to talk to you all the same." The cardinal went to the sacristy. The pope, in a very bad mood, gave him some orders about a dossier concerning one of his friends, a cardinal.

At the time of the article's publication last year, Tossati did not know who this "friend" of the Pope was. But in an article published Sept. 24, he revealed that a highly placed inside Vatican source told him the friend was Cdl. Murphy-O'Connor. 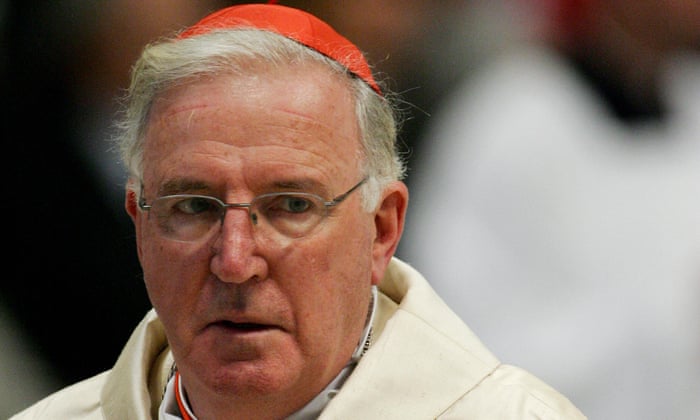 Cdl. Cormac Murphy-O'Connor
Francis' personal intervention into the case is raising questions, especially in light of the fact that Murphy-O'Connor was a member of the St. Gallen Mafia, a leftist clique whose members canvassed for then-Cdl. Jorge Bergoglio during the 2013 conclave.
As archbishop of Westminster and president of the Bishops' Conference of England and Wales, Cdl. Murphy-O'Connor played a particularly key role in electing Bergoglio to the papacy. He actively lobbied North American bishops to vote for the Argentine prelate and served as "a link" to bishops from the British Commonwealth.
In fact, not long after becoming pope, Francis encountered Murphy-O'Connor at a papal audience and joked that he was "to blame" for his election to the papacy.