Would the Zetas care to comment on this Q release regarding Pharmaceutical companies? Is this the White Hats preventing mass poisoning via Flu vaccinations or other medical products?   There has been a national Flu scare on the mainstream news, promotions and monetary incentives by large corporations to panic people into get the shots.  Is this all related? [and from another] http://www.advancedped.com/2018-flu-scare-false-alarm/ The 2018 Flu Scare: A False Alarm [and from another]https://www.infowars.com/massive-flu-outbreak-heres-the-real-story-the-media-wont-touch/ The lies, the hoax, the scandal. Health authorities admit this year’s flu vaccine is only 10% effective. But of course, they urge you to take the vaccine anyway. Every year, hundreds of thousands of respiratory specimens are tested across the US. Of those tested, on average 16% are found to be influenza positive. Most diagnosed cases of the flu aren’t the flu. The basic flu symptoms—cough, fever, chills, sore throat, muscle aches, weakness—can be caused by a variety of factors that have nothing to do with a flu virus. [and from another] http://abc13.com/health/intense-flu-season-hasnt-reached-its-peak-doctors-say/3048873/ A deadly flu epidemic continues to rage from coast to coast, and officials said the epidemic hasn't even reached its peak. There are also three major strains of the flu circulating, and people have the chance of getting the flu three times this season. [and from another]https://www.nytimes.com/2018/01/18/health/flu-season-facts.html As of February 2, infection rates for the 2017-2018 flu season were still rising, higher than those in any year since 2009, when the swine flu was pandemic, according to the Centers for Disease Control and Prevention. Even more worrying, the hospitalization rate is the highest that the C.D.C. has ever recorded at this point in the season. It has just surpassed that of the lethal 2014-2015 season, during which 710,000 Americans were hospitalized and 56,000 died. [and from another] https://www.bibliotecapleyades.net/sociopolitica/sociopol_scientistkilling11.htm [and from another]https://listverse.com/2016/08/09/10-leading-scientists-who-died-in-suspicious-circumstances/ Many of the scientists were found to have had “secret” ties to the intelligence communities, and it was argued that they were being targeted intentionally. 2001: Dr. Don Wiley death also came in the wake of the Anthrax postings in the United States, with many stating that Dr. Wiley was one of the few people who would have been able to accurately trace exactly where the deadly substance had originated. 2001: Dr. Benito Que was a cell biologist and was working on infectious diseases, including the HIV virus, at the time of this death. Burghoff was studying a flu outbreak. He was also an expert on gene-mapping. [and from another] https://www.globalresearch.ca/cancer-and-autism-mysterious-deaths-of-alternative-health-doctors-who-have-real-cures-not-approved-by-the-fda/5465809 2015: Cancer and Autism: Mysterious Deaths of Alternative Health Doctors Who Have Real Cures Not Approved by the FDA. Human GcMAF holds great promise in the treatment of various illnesses including cancer, autism, chronic fatigue and possibly Parkinson’s. When agents from the USFDA and local state of Georgia law enforcement raided Dr. Bradstreet’s clinic, they had a very specific agenda – they were after everything they could find pertaining to GcMAF.  Scientific medical research is also being done on GcMAF for the treatment of terminal cancer. There are many major corporations who would see such a substance as a major threat to their financial prosperity. [and from another] https://www.kff.org/global-health-policy/fact-sheet/u-s-federal-funding-for-hivaids-trends-over-time/ The U.S. government first provided funding to address the global HIV epidemic in 1986. Total funding (bilateral and multilateral) has increased significantly over time, particularly since the launch of the President’s Emergency Plan for AIDS Relief (PEPFAR) in 2003 (add note to indicated that it was reauthorized in 2008 and 2013). Most bilateral HIV funding is channeled to the State Department which receives $3.85 billion in the request. The FY 2018 budget request for HIV includes $5.4 billion for the global epidemic – $4.3 billion for bilateral programs and $1.13 billion for the U.S. contribution to the Global Fund. [and from another] https://www.ncbi.nlm.nih.gov/pmc/articles/PMC4711683/ Ultimately death arising from these infections are often associated with hyperinduction of proinflammatory cytokine production, which is also known as ‘cytokine storm'.  The most virulent influenza, the 1918 H1N1 Spanish flu, infected approximately 5% of the world's population and killed 2%. For infections caused by the 1918 H1N1 virus, the resistance became hyperactive, resulting in an excessive inflammatory reaction known as the cytokine storm phenomenon. 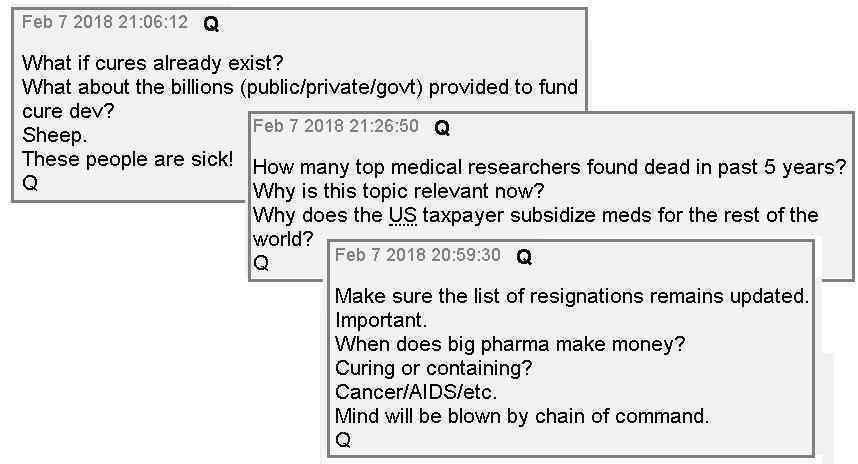 The enigmatic Q has stated that he wants the public to sort out the meaning of his messages, and thus we decline to be used as a short cut in this process. That said, we will address the issue of whether the 2018 flu is as bad as being reported, and whether there is any ulterior motive in creating a panic. It is no secret that the CIA was used in the past to create and spread the Aids virus in Africa and its lab in Utah was the source of the Anthrax sent to Congress in 2002. The FBI was used to harass and investigate the wrong people, as a distraction.

It was also no secret that in 2005 the Bush administration caused the released of a live 1957 pandemic virus from the CDC to 4,000 labs around the world. This release was fortunately caught before the pandemic could be restarted again. Germ warfare has been a tool in many arsenals as it can be used to intimidate the enemy into cooperation, and sculpt the population to eliminate the old and sickly or those considered undesirable. A pandemic could also be used as a reason to declare Martial Law. Those in the know, ostensibly micro-biologists, are often murdered to silence them. We recently cited the deaths of Homeopathic doctors for being in the know about AIDS afflictions among the elite.

Beyond these motives, there are other reasons why disease would be allowed to flourish. The profit motive, ever present in Pharma corporations and their major stockholders, is a reason to hype fear or delay a cure and reap the benefits.  Treatments such as Tamiflu, which are to be taken prior to any symptoms of the flu can manifest, are suspect, as is a vaccine admittedly not effective for a flu virus that has mutated. The health industry is in a bind, as to use antibiotics to save lives, they often create drug resistant bacteria such asMRSA. To prevent flu pneumonia deaths they rush to vaccinate the entire populace, often inciting a cytokine storm among those healthy enough to survive the flu.

That said, why would Q specifically mention cancer and AIDS as two diseases suspected of having a cure that is being kept from mankind?  There are HIV cocktails that have allowed Magic Johnson to remain alive and healthy. But for Africa, AIDS is a certain and quick death. There is an Ebola vaccine, but for the poor in Africa, not available. We have stated that cancer is a normal mutation that happens all the time, but is countered by the body’s immune system. Those profiting from chemo and radiation therapy methods would resist a natural cure being promoted.