Christ the King and the Catholic Doomsday Peppers

During November, the Church remembers and prays for the faithful departed. Our November traditions remind us that at death “life is changed, not taken away,” and this is a consolation as more and more loved ones leave this earthly life.

A few years ago, my sister was taking a walk with her granddaughter and speaking about our then recently-deceased mother in the light of the Creed where we proclaim our faith in the resurrection when Jesus comes again. The little girl stopped, wide-eyed. 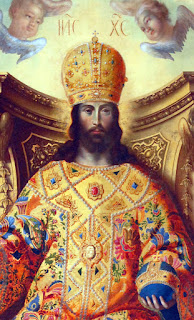 I wonder how many other Catholics would be similarly surprised.

Lately I have found myself drawn to praying a mystery of the Rosary that hadn’t ever caught my imagination before: the Second Glorious Mystery, the Ascension of Our Lord. I have begun to recognize its deep connection not only with the one article of the Creed that specifically invokes it, but with the Feast of Christ the King.

The Feast of Christ the King is, so to speak, the feast day of the Second Coming. We profess our faith in this culminating moment of history at the line of that long middle section of the Creed: “He will come again in glory to judge the living and the dead, and his kingdom will have no end.”

Granted, when the new translation of the Creed was introduced, so much attention was given to Christ’s being “consubstantial with the Father” that we can be forgiven for failing to notice that this consubstantiality is reflected on the other side of that part of the Creed. But there it is: Consubstantial with his Father, he is in his rightful place as the center of worship. And it is as King that he will “come again in glory to judge.”

That this is something to look forward to seems to have been forgotten, though.

In a way, it’s understandable.

Since the killing of George Floyd in May, we  have seen rightful protests for racial justice  hijacked by special interest groups of extreme left and right; an increase in harsh rhetoric and the demonization of “others” whose message seemed to thoughtful or nuanced; gun and ammunition sales soared even in the bluest of blue states. During the interminable  U.S. election season, many voters spoke of trying to discern the “lesser of two evils.” Catholic Churches across the countries have been vandalized. The sex abuse scandals are back in the headlines. Over the top anxiety crowds out trust in God, peace, thankfulness. Even prayer … seems to be desperate!

More and more good sincere, practicing Catholics have begun devouring conspiracy theories and “prophetic” messages and provisioning themselves with beeswax candles and other supplies like Doomsday peppers of the Apocalypse.

None of this has anything to do with our faith in Jesus Christ the King.

This is the Jesus who told us to “consider the lilies of the field” and the “birds of the air,” provided with all they need by the same Heavenly Father who looks after us. (Reread the Sermon on the Mount: Matthew 5-7.)

This is the Jesus who commanded us not to even prepare a verbal defense against those who would haul us off to court to bear witness to the faith. He promised that the Holy Spirit would speak for us when the moment arrived.

When a “prophetic message” leads people to act in a way that contradicts the message of the Gospel, even in something as “small” as trusting in Divine Providence, we should be put on guard. Our enemy is quite willing to clothe himself in light, provided he leaves one small measure of his own shadow. That shadow settles into the mind and begins to ferment, giving off little bubbles of anxiety that can spread throughout the system. The afflicted person may think that this ferment is zeal, and under its influence spread the “prophetic message” to others through social media, in book reviews, even at Church. Before you know it, there’s a run on beeswax candles, and people are warned not to look through the windows when the three days of darkness come, lest they suffer the fate of Lot’s wife.

This used to be called “vain credulity” and was listed among the sins against the First Commandment. Maybe we should make those lists again.

The flip side of vain credulity is a faith that pays lip service to the Lord, but keeps a firm hold on the reins of earthly life, refusing to submit anything to his dominion. In this view, Christ is just King in a symbolic way, over the spiritual or religious aspects of human life, the ethereal parts—because the other stuff, the dollars and cents and laws and policies and "choices," well, that’s our realm “Have dominion,” God told Adam and Eve. Right?

In fact, however, Jesus Christ is, as the Feast proclaims, the King of the Universe. But he can only reign over the earth if he reigns as King within us.

This year, for the Feast of Christ the King, contemplate Christ’s kingship as it applies to you. You might find it helpful to meditate on the “kingly” mysteries of the Rosary as a means for looking at Jesus as Universal King, as your King, and as the one who shares his Kingly role with you.

Christ the King Mysteries of the Rosary

The Annunciation to Mary:  [Gabriel said,] “ ‘the Lord God will give him the throne of David his father, and he will rule over the house of Jacob forever, and of his kingdom there will be no end’.” (Lk 1:32b-33).

Jesus Proclaims the Gospel of the Kingdom: “Jesus came to Galilee proclaiming the gospel of God: ‘This is the time of fulfillment. The kingdom of God is at hand. Repent, and believe in the gospel’ ” (Mk 1:14b-15).

Jesus is Crowned with Thorns, Condemned, and Crucified: “Weaving a crown out of thorns,they placed it on his head, and a reed in his right hand. And kneeling before him, they mocked him, saying, ‘Hail, King of the Jews!’ ” (Mt 27:29);  “Pilate also had an inscription written and put on the cross. It read, ‘Jesus the Nazorean, the King of the Jews’.” Jn 19:19

Jesus Ascends to his Throne, whence He Will Come Again:  “The Lord says to my lord:

‘Sit at my right hand,

while I make your enemies your footstool.’

the Lord extends your strong scepter from Zion.

“ ‘Men of Galilee, why are you standing there looking at the sky? This Jesus who has been taken up from you into heaven will return in the same way as you have seen him going into heaven’.” (Acts 1:11).

As Paul noted in the famous hymn of the humbled and exalted Christ, Jesus “did not deem equality with God something thing to be grasped” (Phil 2: 6). His coming was meant not only to save us from the negative effects of sin, but to release for us a superabundance of grace, making us participants in his own royal priesthood through the outpouring of the Holy Spirit: “[I]t is better for you that I go. For if I do not go, the Advocate will not come to you. But if I go, I will send him to you” (Jn 16:7). And so this final Rosary mystery inspires us to pray “Thy Kingdom come” in a new way, as persons who through Baptism are the priestly, prophetic, and royal stewards of the Universal Lord. Through the Church, God's Kingdom is to be visible in time, "until Kingdom come"!

The Holy Spirit Descends upon the Church: “But you are ‘a chosen race, a royal priesthood, a holy nation, a people of his own, so that you may announce the praises’ of him who called you out of darkness into his wonderful light.” (1 Pet 2:9).

Christ the King and the Catholic Doomsday Peppers