Today's Solemnity of the Annunciation of the Lord would be exceptional anyway. It's a Solemnity in 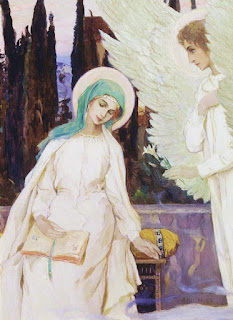 the middle of Lent: all austerities are called off; the Gloria is prayed at Mass; we say the Creed and genuflect at the words "by the Holy Spirit was incarnate of the Virgin Mary"...

Well, we would. Today most of the people who would have been looking forward to celebrating "Lady Day" in a properly liturgical way will instead be logging on and participating in an online Mass, whether it is that of their parish priest, the local bishop, or one of the ministries with a broader reach, such as CatholicTV, Bishop Robert Barron, or the omnipresent EWTN.

That ability to tune in to a convenient online Mass has some people wondering if the only difference between being in Church for Mass and being in your living room with your laptop is that at home you can't receive Holy Communion. In other words, as long as we can't receive the Eucharist, why bother going to Mass in person even if it were possible (for instance, if the restrictions against public gatherings were lifted enough to permit open-air Masses, though without distribution of the Eucharist)?

That's a very modern question, and not only because we have media that permit long-distance "participation." Priest and people all faced "East" (liturgically, even if not geographically), so the people could not see what the priest was doing at the altar. For centuries Catholics in the west did not speak of "participating" in Mass, but of "hearing" Mass. It was not typically assumed that people would receive Communion. (I'm not saying that is good, just pointing out the first thought was given to being present for the Mass itself). Even spiritual bouquet cards had separate areas for listing the number of "Masses" and "Communions" being offered up. Being at Mass, not receiving Communion, was the reason to be at Mass. Communion took it up more than a notch, but it was not the point of going to Mass.

Our current approach, making Communion the "reason" to go to Mass is an aberration that probably comes from an overly individualistic understanding of the Mass, of our relationship with Jesus, and of Communion itself.
Mass is not just a ceremony for producing Eucharist. Through the language of gestures and bread and wine, it actually takes us into the self-offering of Jesus. Mass is a kind of window into Heaven itself. It gives us direct access to what is happening in Heaven right now, where Jesus continues to offer himself to the Father "for us and our salvation." Even Communion is an anticipation of the Heavenly Banquet, where we will feast on the exact same food. Media is a window, too, but it is a window on the window. Streamed Masses cannot give us the same direct access to the heavenly realities that flesh and blood participation does, even without the reception of Communion.

Alternative Ebay : Gothic Jewellery E…
Is Self-Help a Scam
Why Friday The 13th Will Be Your Luck…
Vechain Blockchain Technology Powers …
Four Things Jesus Says About a Discip…
If you had the option of being at the Last Supper or the Sermon on the Mount or the Multiplication of leaves and fish, or of avoiding the crowd and watching them on live TV, wouldn't you have chosen to be there in the flesh with Jesus? He himself is the only "media" through which salvation reaches us. And his Incarnation is extended in time through the Church, the Body of Christ now composed of many members. But media is highly individual; even if we watch it on the TV together, we are a self-selected group (during these days, a household), not a flock gathered into one by the Word of God from scattered peoples and made into one body by baptism. 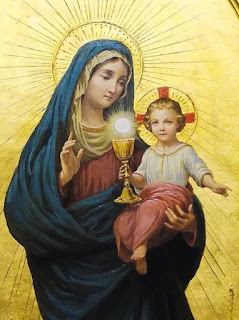 The feast we celebrate today, the Annunciaation of the Lord, matters tremendously! Through Mary's yes, Jesus took on human nature, whole and entire, and he wills to connect with each of us in our human nature as it is: flesh and blood and even relationships.  Livestreaming at least allows us to spiritually unite ourselves with the sacrifice of Jesus, and with all those who are also joining spiritually through media. It is a substitute for real, "substantial" communion with our neighbor...and it is the best we can do under the present unusual circumstances.

The prophet Amos spoke of a time when a great famine would descend upon God's people, "a famine not of bread or of thirst for water, but for hearing the Word of the Lord" (Amos 8:11). Surely, that famine is upon us now. But today is the Annunciation of the Lord: today Gabriel has come to Mary and brought her the news that, upon her acceptance, the Word would take flesh and dwell among us and become the Bread of Life for the whole world.