Through my efforts in Pillars & Foundations, I've been exploring and experiencing the services of many different churches, predominantly near where I live in Massachusetts. Discovering all of these different faith communities builds my knowledge of the neighborhoods around me and the people who live there. These institutions are important, often overlooked and even misjudged centers of our communities that seek to make a positive impact on their participants, as well as others through their generosity and public service. It is possible that through this activity I may eventually consider a long term relationship with one of these pillars and foundations of the community, however I am eager to do a lot of exploring first.

The church was established in 1813 as First Universalist Church which it is still formerly known as today, despite the merger of Universalists and Unitarians in more recent history. For over 200 years this congregation has served as a focal point of Wakefield, providing a source of spiritual and philosophical guidance as well as an organization that fostered a sense of community for generations.

Four Things Jesus Says About a Discip…
PHOTOS: Exposed! See Abuja Church Whe…
Best Story-Rich Games on PC: November…
21 Most Instagrammable Places In Peru…
Rare Antique Rugs Topkapi Palace Muse…
As noted in Wakefield UU's resources on their website while the church was constructed in 1839, the steeple and spire were not added until 1859 following moving of the church structure and coinciding with renovation.
I highly recommend visiting UU of Wakefield's website to explore some of the information on the history. This link in particular was intriguing as it shows a holiday picture from over 100 years ago, demonstrating while what one today might think of as old, the pew organization, it has been substantially renovated through history. 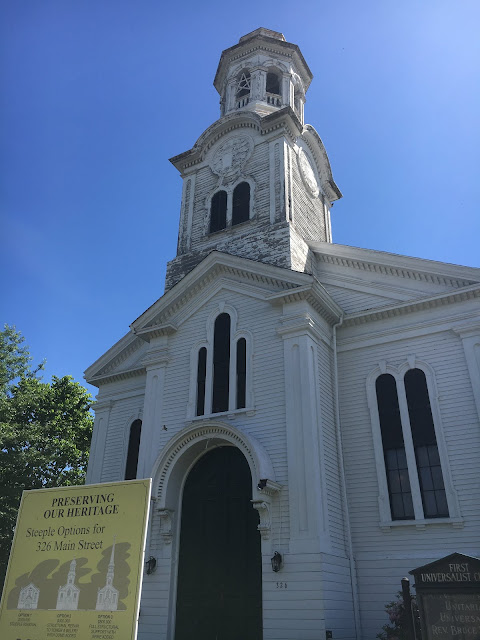 When I attended Wakefield UU the congregants, true to their expressed Principles of Unitarianism, as well as messages of intent on their webpage, were very warm, very welcoming to me. I happened to attend on a service of special significance because for the summer months Wakefield UU discontinues meeting in the church sanctuary, and meets nearby at Breakheart Reservation at 9:00 am on Sundays, weather permitting. Congregants walk around, converse, and may occasionally continue the social activities over breakfast afterwards. Anyone interested in joining Wakefield UU for this should see the contact information to this regard on the website.

The service had a theme of spring, or perhaps the transition of spring to summer. Central to this was the inclusion of a UU practice called the flower communion. The story of Norbert Capek and his wife Maja who established this tradition in Czechoslovakia is quite interesting (see link on flower communion). The premise of this communion to help foster unity/closeness amongst congregants is that each member brings a flower, places it in a communal vase. Then at a designated time congregants go up and take a different flower than the one which they brought. The symbolism is the variation of the flowers is much like people, that none are truly alike, however it is through that collective diversity that community is fostered.

Perhaps related to this this, the topic of Rev. Bruce Taylor's service was the diversity of types of prayer. His sermon described that while prayer in itself does not create change, it may prompt it through the actions of those individuals hear the many prayers related to any number of concerns.

I related to this because I've often observed people being criticized in recent times for perceived inaction when they offer prayers. Perhaps their issuance of concern is not inaction at all, but one out of many voices that drive some or many to action where otherwise there might be none?

One hymn was sung was "The Sweet June Days," and the reading was "Summer Sabbath," an excerpt of "Shine and Shadow," by Kathleen McTigue, which calls for people to unplug from the devices and the chaos of the world and focus on the ones that they love.

UU of Wakefield is active in their community in both social and charitable activities. In the service I was at the congregation was speaking about a future trip to My Brother's Table in Lynn which is a community kitchen that provides meals to hose in need. In their May 2018 newsletter, Wakefield UU mentions a dinner, silent auction, and comedy show which was held to raise funds for My Brother's Table. They have a social action committee that meets to discuss ways to make a difference in accordance with UU values. UU of Wakefield also supports various other local initiatives and activities including assisting the interfaith food pantry.

Wakefield UU adds to the cultural and artistic offerings of Wakefield through supporting the Standing Room Only concert series, and the Linden Tree Coffee House which often brings nationally known folk acts to perform. They have a monthly meditation hour and a singing group amongst other social organizations.

The social awareness and dedication of Wakefield UU congregants surely enriches the greater community in which it resides.

Village Cut in Half by Ravine Minecraft 1.14+ Seed