This is the fifth entry in a blog project where I intend to explore and experience the services of many different churches, predominantly near where I live in Massachusetts. The motivation for this activity/journey is detailed in the introduction post of this blog. The institutions are important, often overlooked and even misjudged centers of our communities that seek to make a positive impact on their participants as well as others through their generosity and public serve. I'd like to learn about their impact and share what I find. It is possible that through this activity I may eventually consider a long term relationship with one of these pillars and foundations of the community, however I am eager to do a lot of exploring first. 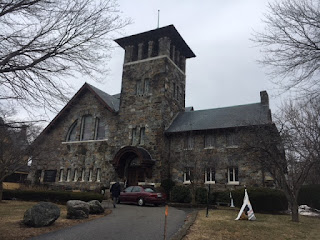 The Building and History:

I didn't know much about the Methodist Church itself, and did some quick searching. The Methodist Church had its formation from John and Charles Wesley as early as 1736. Their history is surprisingly accomplished and included outreach to Spanish speaking Native Americans, as well as being early proponents abolition in the British Colonies. Today's United Methodist Church is quite contemporary, only dating to 1968 when the Methodists united with the Evangelical United Brethren Church.
First United Methodist Church of Melrose, (FUMCM), sits on Main St. in Melrose in a stretch of idyllic businesses and government buildings that remind you of Frank Capra films and city centers of a bygone era. I've driven past this building many times wondering what lies within. If you are lucky enough to drive by at night when there is activity inside the stained glassed window above the entrance is stunningly illuminated. This is easily one of the more magnificent buildings in Melrose, a town that has no shortage of American-Victorian and suburban charm. 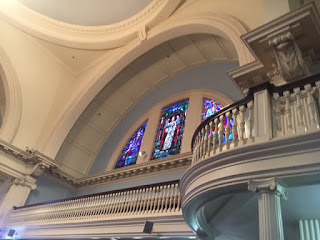 An article in Melrose Wicked Local does an excellent job providing a high-level history of the church which dates to 1815 when Melrose was actually known as North Malden. Today's building dates back to 1904.
While FUMCM has some of the pulpit structure and chorus risers that I've seen in my Congregational church visits, it separates itself with a decorative interior. Elaborate stained glass windows adorn vaulted areas in the upper eaves of the main chamber. A beautiful balcony wraps around three sides facing area containing the lectern. The lower walls are painted a robin egg blue, and perhaps in more recent times a deep blue carpet has been added throughout. A pipe organ flanks the church, however it was not used in the service. 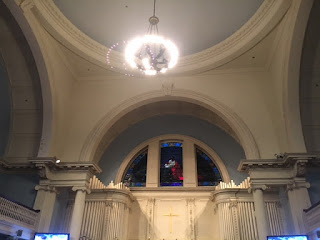 Who Are The Congregation?

The congregation classifies itself as a "Reconciling," congregation which is a similar designation to Open and Affirming, and it is a testament to their inclusiveness. It was a decent sized sanctuary and was fairly well attended. The attendees spanned generations and different cultural backgrounds as well. A dozen or so children attended. One item unique to FUMCM was a play area (toys neatly stacked beneath a pew) for the small children in-between a set of pews. For the ten minutes or during the general announcements, the smallest of the children occupied themselves here until being called up front for a show & tell activity, related to items placed in a "wonder box." One child had placed a piano music book in the box, which Rev. Stacey Gould Lanier used to discuss the gift of music, prior to the children leaving for Bible study. 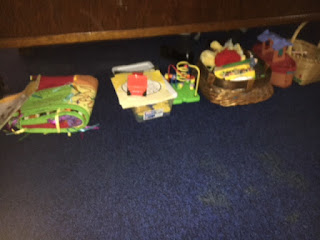 Rev. Lanier struck me as a very engaging person, interested in knowing who is in her Congregation, and who her visitors may be. Where often ministers or priests will stand by the door when services end, Rev. Lanier stood at the entrance, introducing herself as Stacey, and making an effort to learn the names of any unfamiliar faces.

The service relied heavily on music, with a sizable choir and piano accompaniment. My favorite inclusion was the singing of Joyful, Joyful, We Adore Thee, or Ode to Joy as classical musical fans may know it as. The hymn numbers are announced, however LCD screens flanking the front of the church display lyrics and announcements, as well as any readings to help people follow along. Even the Lord's Prayer was sung. I do remember this on occasion at Catholic mass as a child, but the melody was different than the one used here, and there were some slight modifications to the words. Apparently some of the hymns and melodies used are traced to John Wesley (a Methodist founder), 539 of them! I noticed from videos, as well as attending this church that there does seem to be a distinct sound to these, different from those I've heard elsewhere, and perhaps this is why.

The sermon was called "Forgiveness Heals," and discussed giving forgiveness, however it perhaps was more about seeking forgiveness. Rev. Lanier, discussed the prevalence of false apologies, using the unfortunate current events of various celebrities who have been exposed for serial sexual assault/predator type behaviors. The idea that they are likely not truly sorry, and that for instances such as this, perhaps we need to pause before forgiving, and give them the chance to truly apologize or reflect upon their wrongs. Rev. Lanier cited the 12 steps of the AA program, with specific reference to steps 5 through 7. These are, "5)Admiting to God, to ourselves, and to another human being the exact nature of our wrongs," 6) Being "entirely ready to have God remove all these defects of character," and 7) "Humbly asking him to remove our shortcomings."
The synopsis of the sermon is a reminder that we all sin, and must ask for forgiveness from those we have wronged to move forward, and ultimately be reconciled.

I very much recognize the merits of the sermon, of seeking forgiveness and doing right by those we have wronged. I like to think that I generally know when I have committed such wrongs, and I have apologized accordingly, with sincerity. However, I do worry about those times in which I've been unaware of wronging someone.
I perhaps became overly preoccupied with concerns over the issuance of forgiveness I find myself being concerned of accurately judging whether or not someone is issuing a "false apology."   I understand how one could be seen as unwise to forgive in such a situation. However, aren't there sins where reasonable people can believe that they are right when they've committed a wrong? I believe they happen all the time. For this reason I'd like to think that I try to forgive whenever possible, regardless of whether or not the transgressor is truly remorseful. Are there things to vile to conceive of forgiveness for people? For most I suspect that is true. But I think about all of the negativity out there, the poisonous resentment, often over what?  I can't help but wonder, how much of it is necessary? For me discretion is how I can continue to grow, and impact others in positive ways, despite differences. Maybe that is too idealistic?

What the Congregation Does:

FUMCM has many resources available to both educate, and allow for participation in activities to foster racial justice. There is a United Methodist Women's group through the church which participates in various charitable and social causes. Other activities the church participates in includes, but is not limited to, a crayon collection drive to help collect supplies for schools in need, the Bikes not Bombs project which benefits various developing nations, supporting the Bread of Life Ministry in Malden, MA, which provides food to those in need, and food pantry donations to the Pantry of Hope which serves Melrose, MA.

Included in the service pamphlet were references to congregation members being involved in charity work in Puerto Rico, because of the recent hurricane, as well as for the economic strife in Haiti. Several Congregation members were planning to travel to Israel in the immediate future for a religious based learning experience.

First United Methodist Church of Melrose is yet another incredibly impactful organization that touches its community in many ways. It fosters charity both within the local community, but also across the globe. It educates its Congregation on the troubles experienced by others less fortunate, and encourages positive activism. It should serve as an inspiration to many so that they can not take for granted the positive change in the world that they can contribute to.
The United Methodist organization has special meaning to me in particular, because my father's family identified as Methodist, their church being the Bath United Methodist Church in Bath Maine, at that time on Beacon St. Despite being raised Catholic, I have memories of attending this church prior to my grandfather's death when I was a teenager. I remember a personal and somewhat unstructured service by comparison to what I was used to. My grandfather, and father's family as a whole, to my knowledge was very secular. My understanding is there was probably a relationship to the church to help provide guidance to my father and uncle when they were young, but that this relationship did not continue. It certainly gave me experiential bias that the Methodist faith did not permeate the lifestyle of a congregation relative to Catholicism.  It is nice to have these perceptions altered/corrected with new experiences.
If you enjoy my posts, or are interested in discussing them further, don't hesitate to comment, follow this blog, and share them as you please. Prior posts are Melrose Highlands Congressional Church, and Most Blessed Sacrament in Wakefield, First Congregational Church in Stoneham, and Emmanuel Episcopal Church in Wakefield, MA.


This post first appeared on Pillars & Foundations, please read the originial post: here
People also like
The Mysterious and Majestic Atacama Desert: A Guide to Visiting this Unforgettable Place
How come so many Christians don’t really know God?
School Kids Jump Basketball Ref Inside Church Gym After The Game