This is the fourth entry in a blog project where I intend to explore and experience the services of many different churches, predominantly near where I live in Massachusetts. The motivation for this activity/journey is detailed in the introduction post of this blog. The institutions are important, often overlooked and even misjudged centers of our communities that seek to make a positive impact on their participants as well as others through their generosity and public serve. I'd like to learn about their impact and share what I find. It is possible that through this activity I may eventually consider a long term relationship with one of these pillars and foundations of the community, however I am eager to do a lot of exploring first. 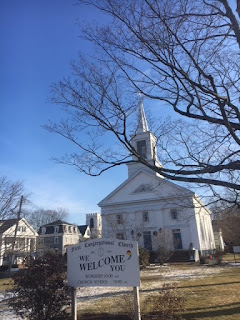 The Building and History:

First Congregational Church in Stoneham sits on picturesque Stoneham Common off of Main Street in the town center. The church sits amongst public buildings, businesses and other churches around the park that boasts such activities as ice skating in the winter, and holiday tree lighting ceremonies prior to the holidays. It has an air of Norman Rockwell idealism within our modern, rapidly changing world.
While the congregation dates to 1729, the current church was built in 1840. There is a Wikipedia page, however some of the information there does appear to be slightly inaccurate and/or outdated. For example the church, despite being very old has been covered in vinyl, and is no longer clapboard. This said, it does make comments on architecture that the church's page lacks. It is an example of Greek Revival architecture, and the front boasts a pedimented gable, the decorative triangular shape over the main entrance. The building is on the National Historic Register, as is the Central Square Historic District of Stoneham, MA in which it resides. Sadly, Stoneham's First Unitarian Church, located behind First Congregational, is no longer in service, but houses a community access television station.
Detailed history records of First Congregational in Stoneham, including diaries of prominent figures and church ledgers from the days of the founding can be found here.
The inside of the church boasts the white interiors I've previously noted in other Congregational churches. I recently joined a Facebook group called "Explore Congregational Church History," and asked the question about the minimalist and white interiors of these churches. While I had some rough idea I was looking for specifics to share about the motivation for this décor. The group moderator Rev. Dr. Doug Showalter, was kind enough to share a sermon he had given on Ulrich Zwingli, who began the Reformation which was later complemented by Martin Luther. These reformers both had strong opinions that often conflicted, and I won't focus on that. Ulrich is important because this Swiss reformer was the first to "white-wash," his cathedral. To be brief he threw out adornment, murals, statues, stained glass, which was thought to be out of step, or unsanctioned by the Bible. His church like contemporary Congregational churches had not altars either, only pulpits. The idea being that these things are a distraction from the Gospel, and potentially are idolatrous. Interestingly this debate had actually gone back to the 8th century in Catholic history, yet wide application didn't occur until the Reformation. 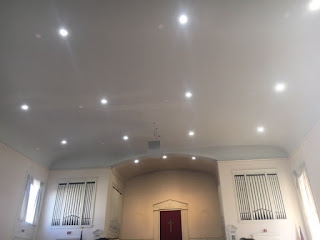 The church has a large balcony which today is unused, with ornate railings that appear to possibly be cast iron. The floors are hardwood, something which reminds me of my childhood church, and is missing from many of the perhaps newer or renovated churches I've visited recently. 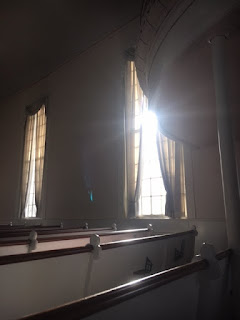 Who Are The Congregation?

The First Congregational Church spans generations. Young adults were serving as ushers and the donation collectors, and ten or so children headed off to Sunday School at the beginning of the Service. The Rev. Enid Watson who was a guest minister on the day of my visit invited the children up to the front of the church prior to their leave of the service. In an impromptu, or so it seemed, micro-sermon, Watson asked the adults if they had any wise advice for the children, making jokes when people were hesitant to offer. Ultimately she asked everyone to speak their advice at once. And then she turned to the children and asked them if they would follow that advice. The point was that such advice was unclear, but that Christ and the relationship one has with Christ could offer a clear path. It was a very enjoyable exercise, that demonstrated the interaction, and the humility, and approachable nature that seems to be a focal point of First Congregational.
The First Congregational Church is an Open and Affirming Congregation, and they are proud of their inclusiveness. In their Church Flyer they included a wonderfully written welcome statement of inclusiveness, and guest Rev. Watson made a point to complement them on it.

The service was structured with music hymns, and was complemented by an excellent choir and beautiful organ, which seemed fairly powerful given the moderate size of the church itself. A welcome and a call to worship, was followed by the previously mentioned activity with the children. The readings on this day were focused on giving hope such as Isaiah 40:29-31, and Mark 1:14-20, which from my understanding implies Jesus giving his followers purpose, or a mission. Rev. Enid Watson's sermon to follow was quite unique, and quite inspired. The theme of hope, of becoming more, was tied into the Transfiguration of Christ, where Christ's divinity, was revealed to disciples, thereby establishing potential and confirming hope. (My lay-person interpretation) Watson then proceeded to talk about a behavior modification practice called Motivational Interviewing. Watson proceeded to describe how this practice focuses on building upon the positive, rather than removing the negatives. She provided an example of a teacher who instead of telling a student that they had 18 wrong on a 20 question quiz, focused on the two they got correct as a starting point. This formed the title of her sermon +2 (smiley face), which I found pretty amusing. Additionally she mentioned a TED talk by Helen Pearson, which discussed a British study that followed thousands of children and is mining that data to understand what makes some individuals more successful than others. This study has had a degree of publicity, so you may have heard of it before as I have. This was tied into the questions asked to the adults, and children earlier, as well as the idea of providing hope and positive feedback, and the difference it can make.

The service did not include communion on this occasion. It did include a couple of group prayers, one of them being the Lord's Prayer.

One of my favorite portions of the service was a "Sharing of Joys and Concerns." In this very interactive portion, Rev. Watson first started by listing several people in the congregation, or with relation to the congregation who had recently experienced a hardship, or were currently fighting one. Then members of the congregation themselves spoke up in requesting for prayers and thoughts for loved ones, or issues. Requests ranged for prayers of support for those dealing with loss, to support for The Woman's March, and the rights of free speech for all, regardless of political persuasion. It was really informal, very inviting, comforting, and spoke volumes of the type of people who make up the congregation. To lighten the mood, Rev. Watson asked God to help Tom Brady, Patriots Quarterback, which was met with some "Amen!" shouts, fist pump, and head nods, from a laughing congregation. 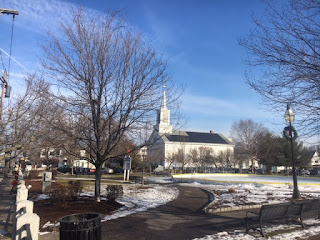 This church brings together a nice balance of ceremony, music, celebration and contemplation that certainly adds value to those who attend. The sermon was both advisory, as well as intellectual, and the invitation for participation, and the inclusiveness were very welcoming.
I think we could all use more contemplation, more pause, more calls for inclusiveness in our lives. It is a struggle, I believe for most to welcome and try to bring forth hope and change to others, not by shutting them out, but by helping them improve upon what they have, that is already good. Focus on the couple of things that you, or others do right, and build from there. How can we deny that is an absolutely terrific message?

What the Congregation Does:

First Congregational Church (see website link to left for info), has a large footprint of impact in Stoneham as well as their surrounding communities. They are affiliated with the Purpose School which is a Stoneham preschool. They have a page on their "outreach" which includes their own food pantry to help out those in need in Stoneham. They also serve community dinners on Tuesday. Other community and charitable involvement includes but is not limited to assisting a Boston based charity called City Mission, contributions to Martin Luther King Day celebrations, and toy drives for the Salvation Army. In addition to this they host activities such as craft fairs which help promote a sense of community throughout the year.

These pretty buildings that we drive and walk by routinely aren't simply ornaments that create character and atmosphere in our communities, they are living history. The congregations are built upon local families gathering for comfort and community, but also to give back and make the world a better place. They should be inspiring, they are to me.
If you enjoy my posts, or are interested in discussing them further, don't hesitate to comment, follow this blog, and share them as you please. Prior posts are Melrose Highlands Congressional Church, and Most Blessed Sacrament in Wakefield and Emmanuel Episcopal Church in Wakefield, MA.


This post first appeared on Pillars & Foundations, please read the originial post: here
People also like
The Mysterious and Majestic Atacama Desert: A Guide to Visiting this Unforgettable Place
How come so many Christians don’t really know God?
School Kids Jump Basketball Ref Inside Church Gym After The Game