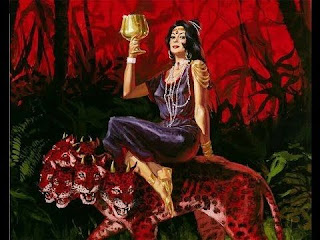 Historians often teach that Babylon is an ancient city in Mesopotamia, not far from Baghdad, Iraq. Other people believe that Babylon is America or the city of Jerusalem, since that is where the Palestinians are trying to set up their kingdom. In the bible, the woman clothed with purple and scarlet is defined to be a city that sits on a beast with seven heads — or seven hills for that matter. But Jerusalem cannot be the woman riding the beast because it was not built on seven hills. The city that is built on seven hills has to be Rome, where the headquarters of Roman Catholicism exists and the future of the revived Roman Empire.

Another city that contradicts Rome as mystery Babylon is Mecca, the capital of Saudi Arabia. With Mecca being the center of the Islamic religion, some people believe that it fits the criteria of the woman, but where in the Koran do Muslims make use of a golden cup? Only in the Catholic Church does a priest use the chalice during the practice of a mass, which would fit the description of the woman holding a golden cup, as it is taught in the book of Revelation.

Roman Catholicism has been declared as the first and only true church, but sacred tradition adds on to what the bible teaches. Their church believes that the papacy has authority over the scriptures, but churches outside of that teach sola scriptura, even though Protestantism came late in the 16th century. That is when reformers, like Luther and Zwingli, found the bible to be the true word of God. Thus, the Reformation was not to reconcile the church but to change people within the congregation, so they could discern the difference of what was being taught by the Catholic Church and in literature that corresponded to the bible.

Much of what was written at the time of the Reformation was by Martin Luther, his 95 theses and several published books. One of his books, The Babylonian Captivity of the Church, summarizes the bible’s perspective on the harlot, particularly in Revelation 17. Most of it talks about the sacraments of Roman Catholicism, including the sacrament of confession and the sacrifice of the mass, which is the center of their religion.

When the mass is being practiced, it’s believed that the priest is elevated to a level that turns the bread and wine into the actual body and blood of Jesus. Each time somebody participates in the mass would replace what God has already finished on the cross, as it is a re-representation of what he has done. It was not until the second century when the Catholic Church was built, and then a series of popes failed to follow in Peter and Christ’s footsteps. Instead, they formed a hierarchy system known as apostolic succession, so bishops and cardinals would obey the pope who remained in allegiance to the Roman Empire. Those who refuted the doctrine of apostolic succession were excommunicated or labeled as an anathema by the Pope.

For centuries, popes began to kill Christians for not taking part in the mass, especially Pope Innocent lll. For example, John Huss died for his faith at the Council of Constance, believing that the scriptures were infallible over the church. But fraud and fabricated history has tried to replace Christiandom with the early fathers. There were the earliest Christians who were put to death by the Roman Empire, such as Peter, Paul, and Saint Steven (who was stoned in Jerusalem). Any others after then are usually thought to be Catholics who were persecuted by the Roman Empire. Most other Christians, after the bible was written, were wiped out by the papacy that was tied to emperors and kings throughout Europe.

Islam has also persecuted Christians around the world, for the sake of creating a one world religion. Now, Catholicism wants to unite with all protestant denominations as an ecumenical movement. That is the same as Islam joining Christianity — known as Chrislam. The Reformation is being betrayed by evangelical leaders who aren’t aware of the opposing standpoints of both religions. Apostolic succession may be the core foundation of the first church, but it is not the foundation of what the Protestant sects teach except for a small percentage of them. There really is no core foundation of God that we can comprehend except for the happening of Christ. He made a new covenant in which you cannot merit your salvation through works or self-righteousness but through faith alone. How can you receive God’s atonement without accepting his sacrifice that was made sufficient?

If you are part of the Catholic Church, then how can one become perfect enough perfect in the eyes of God? Would the hierarchy or the upper echelons justify you as sinners? They do not adhere to what Jesus said: “Those who are well have no need of a physician, but those who are sick; I have come to call not the righteous but sinners” (Mark 2:17). We should not go to Catholicism because it was the first church, but instead learn the gospel that was being spread before any church was ever established.