The Pelican, a Christian Symbol 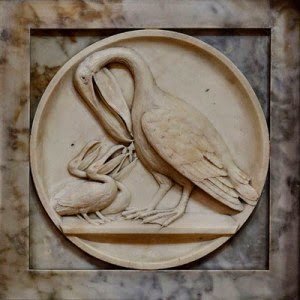 Pelicans may be regarded as strange avian competitors in commercial and recreational fishing. With pathetic stares that disguise its hidden desire for every catch, they would sometimes try to intercept one from fishermen by looking apparently pitiful or by other means. Using its signature long beak and large throat pouch, they would easily catch fish and drain the water before swallowing it. Some would even consider them as “lazy freeloaders,” animals that take advantage of the charity of others. This is contrary to the symbol of self-sacrifice that it depicts in Christianity since time immemorial.

Best Home Sauna To Stay Warm All Wint…
Awakening DIY Citrus Shower Bombs
Why I Chose to Be Vaccinated Against …
Social Security Disability Insurance:…
How to Tell if You Have Bed Bugs?
It doesn’t soar like the mighty eagle nor symbolize peace like a calm dove. However, the imagery of the mother pelican striking or vulning (from the Latin vulnerare, "to wound") her breast to feed her nestlings to prevent starvation in time of famine is rooted in an ancient legend that antedates Christianity. It was believed that she feeds her dying chicks with her own Blood to revive them from death, but, in turn, lost her own life.
The pelican symbolizes our Lord Jesus Christ who gave His life for our redemption and the atonement of sins through His passion and death. We were dead to sin and have found new life through the Blood of Christ (cf. Col 2:13) who said: “This is my blood of the covenant, which is poured out for many for the forgiveness of sins" (Mt 26:28) and “whoever eats my flesh and drinks my blood remains in me, and I in him" (Jn 6:56). Furthermore, Jesus continues to nourish us with His Body and Blood in the Most Holy Eucharist. The Catechism of the Catholic Church (no. 1394) teaches us: “As bodily nourishment restores lost strength, so the Eucharist strengthens our charity, which tends to be weakened in daily life... Having received the gift of love, let us die to sin and live for God.”
We could trace the allegorical interpretation of the pelican in the Physiologus, a second-century Christian work written by an anonymous author, that was a source for the symbols used in the various stone carvings and other artwork of the Medieval Ages. It is a compendium of illustrated volumes of various animals, birds and even rocks, which reflected the belief that every living thing had its own special meaning. Clearly, the pelican became a symbol of charity.
Reference to the pelican and its Christian meaning are also found in Dante’s Paradiso (1321) which refers Christ as “il nostro Pelicano;” John Lyly’s Euphues (1606); and John Skelton’s Armory of Birds (1529) among others. It is also contained in the 6th stanza of Adoro te devote, a Eucharistic hymn by St. Thomas Aquinas that describes Christ as follows: “Pie pellicane, Iesu Domine, | me immundum munda tuo sanguine; | cuius una stilla salvum facere | totum mundum quit ab omni scelere” [“O Loving Pelican, O Lord Jesus, | Cleanse the unclean me with Your Blood; | Of which a drop can save | The whole world from every sin” (The literal translation is provided by the author)].
The legends of self-wounding and the provision of blood may have developed from the impression that a pelican stabs itself with its bill, when in reality it only presses its bill onto its chest, a physiological maneuver to fully empty its pouch. Furthermore, its bill tends to rest on its breast and the Dalmatian pelican has a blood-red pouch in the early breeding season, which may have contributed to the myth.
The symbolism of the pelican is still often found in modern-day Christian murals, frescos, paintings, stained glasses and vestments. On the one hand, if the symbolism is based on something that is not grounded in reality, there might be a danger of promoting superstition rather than the truth. On the other hand, an argument could be made that even when the reason for the use of symbol is based on myth, if that is widely known, understood, and extensively recognized to be considered part of the tradition, it should be retained. It is not definitely our task to resolve the issue. However, whether we look at the symbol of the pelican from the scientific perspective of Ornithology or from the historical perspective of Christian Art, it remains to be a striking reminder for us that that the Lord, who suffered and died for us and nourishes us on our pilgrim way with the Eucharist, loves us very much (cf. Jn 3:16). May such image impel us to share the same charity and selfless love to everyone.
References:
Ferguson, George, Signs and Symbols in Christian Art, 1961.
Nelson, Bryan; Schreiber, Elizabeth Anne; and Schreiber, Ralph, "Pelicans" in Perrins, Christopher, Firefly Encyclopedia of Birds, 2003.
Saunders, William, “The Symbolism of the Pelican” in The Arlington Catholic Herald, 2003.
Steffler, Alva William, Symbols of the Christian Faith, 2002.


This post first appeared on Priest Stuff, please read the originial post: here
People also like
Best Home Sauna To Stay Warm All Winter
Awakening DIY Citrus Shower Bombs
Why I Chose to Be Vaccinated Against COVID-19
Social Security Disability Insurance: See if You Qualify and How to Find Adequate Help to Get It
How to Tell if You Have Bed Bugs?
Here’s Our First Unofficial Look at The OnePlus Watch
7 Reasons Why I Chose To Be A Generalist Physician

The Pelican, a Christian Symbol