A superpower, an Islamic republic and a proxy war

There is no doubting Iran's Middle East ambitions. The Islamic Republic wants to be the nation calling the shots in the region despite the superpowerdom of the United States. This is why Shia militias are active in Syria and Iraq fighting to promote Iran's security and economic interests.

Only last week 30 missiles were fired at the US and Iraqi army near Kirkuk, a northern city in Iraq. The Pentagon blamed an Iran-backed militia for the attack. In the incident, an American private contractor was killed and four American and two Iraqi soldiers were injured.

For the records, there has been a proxy war between America and Iran since Mr Trump pulled out of the 2015 nuclear deal and reimposed sanctions on Tehran which has resulted in Iran coming under huge economic pressure at home.


As a direct result of the face-off between the two countries, series of attacks have launched against US allies in the Middle East, with six oil tankers holed by mines in or near the Gulf in May and June. In September, missiles and drones said to have been launched from Iran hit key Saudi oil installations.

The US has now bared its teeth by launching the first airstrikes for almost a decade against Iranian-backed militia forces in Iraq and Syria. This happened in the last 48 hours.

Five bases used by the Kataeb Hezbollah, a Shia militia were hit in the US attack. The Pentagon added that three of the bases hit were in Iraq and two in Syria. 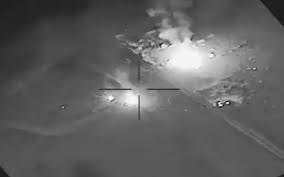 A superpower, an Islamic republic and a proxy war