Lions lead slips away with second-half mistakes, lose 35-17 to Packers 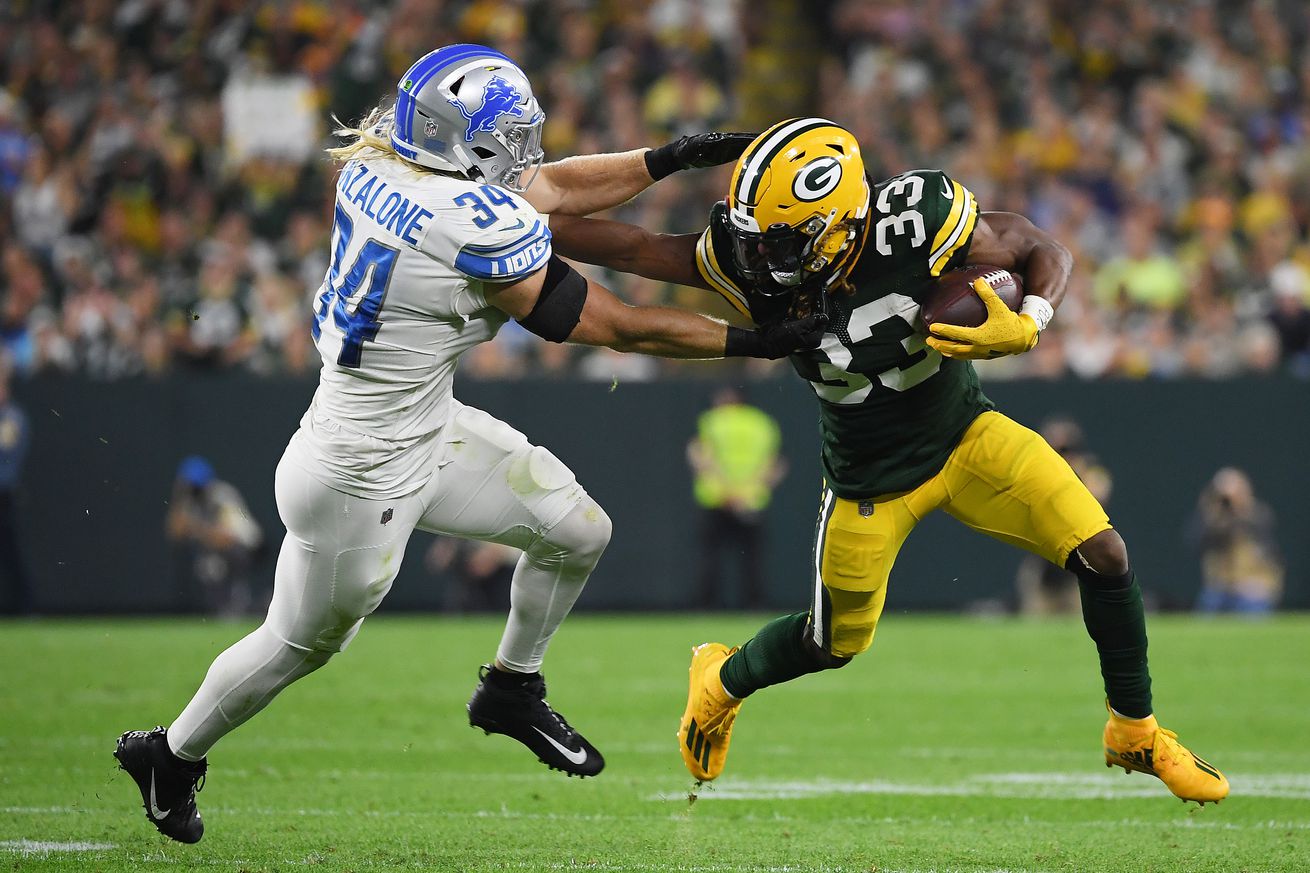 The Lions hung with the Packers, but third quarter mistakes blew the game out of reach.

Much like the Detroit Lions Week 1 game against the San Francisco 49ers, the team seemed to have a solid game plan in the first half. Detroit’s offense was able to get moving steadily against a leaky Green Bay Packers defense. The Lions’ defense was ceding yards and points, but they were making the Packers work for it.

But just like last week’s game, there was a turning point where everything changed and the Lions had the game spiral out of control. And this time, there was no heroic comeback to mask the serious issues facing Detroit’s team.

In the end, the Packers walked away with a comfortable 35-17 win, and the Lions dropped to 0-2 for the second straight season.

The Detroit Lions won the toss and wanted the ball first. That turned out to be a wise decision. On the third play from regulation, Jared Goff had a ton of time to find someone, and Quintez Cephus leaked out deep. Goff laid a perfect pass to him for a big 46-yard gain:

It only took a few more plays for the Lions to find the end zone, and it was Cephus again who was left open. 7-0 Lions.

The Packers responded quickly with their first touchdown drive of the season. On their 11-play drive, they ran the ball eight times, gaining 34 yards. Aaron Rodgers capped off the drive with a touch-pass to Aaron Jones for an easy 4-yard score. 7-7 tie.

The Lions' offense got moving again but had to overcome a couple of penalties. A false start and a holding penalty put Detroit behind the sticks as the game moved over to the second quarter.

The Lions got themselves into a manageable third down situation (9 yards to go), but Goff was under immediate pressure after Matt Nelson let Preston Smith right by him. Goff had to throw it away but also got called for an intentional grounding penalty, ending Detroit’s penalty-filled drive in a punt.

Green Bay’s offense, too, would slow. After Ifeatu Melifonwu broke up a pass with the back of his helmet, Nick Williams got the defense off the field with a third-down coverage sack.

Detroit’s offense looked unfazed from their previous drive. A well-balanced offense moved the team down the field methodically. A facemask penalty helped, but Detroit rushed for 21 yards and Goff passed for 22 yards, including this beautiful 8-yard touchdown to T.J. Hockenson. 14-7 Lions.

The Packers returned the ensuing kickoff for 41 yards, putting themselves in great field position to try and tie up the game. As the Lions continued to play two deep safeties, the Packers continued to take advantage by gashing them with the running game. With 27 yards on the ground, the Packers easily drove into the red zone, and Rodgers found Aaron Jones for his second receiving touchdown of the game. 14-14 tie.

Detroit’s two-minute drill got a nice start with a big 33-yard kick return from Godwin Igwebuike. A 12-yard run from D’Andre Swift and a 20-yard catch from T.J. Hockenson got Detroit into field goal position with 24 seconds left and two timeouts in their pocket. Goff couldn’t connect with Amon-Ra St. Brown or Cephus for shots at a touchdown, so the Lions settled for three with an Austin Seibert 43-yard field goal with three seconds left. 17-14 Lions.

The Lions' defense looked primed to make another defensive stop after Michael Brockers picked up a sack on a second-and-2, setting up a third-and-12. But on the next play, Rodgers laid a perfect pass to Davante Adams for a 50-yard bomb.

3rd and [email protected] goes UP TOP to @tae15adams!

Even worse for Detroit, rookie cornerback Ifeatu Melifonwu went down with an injury on the play, forcing converted safety Bobby Price into the starting lineup. A couple plays later, Rodgers whizzed a pass right over Alex Anzalone’s head into Robert Tonyan’s awaiting hands for the score and Green Bay’s first lead of the game. 21-17 Packers.

[email protected] with the catch & the TOUCHDOWN! #DETvsGB | #GoPackGo

Detroit’s offense continued to move the ball well between the 20s, and they stayed aggressive. Unfortunately, that aggressiveness got the better of them. Facing a fourth-and-1 from the Packers' 25-yard line, the Lions opted to go for it instead of kicking a 42-yard field goal. Goff’s pass to Cephus went off his fingertips and the Lions turned a promising drive into zero points.

The Packers would make the Lions pay with another methodical drive. Rodgers was particularly deadly on third down, converting a third-and-14 and third-and-7. He capped the drive with a third touchdown pass to Jones, this time with Jamie Collins a few steps behind in coverage. 28-17 Packers.

That's the hat trick for @Showtyme_33!

Detroit, not being able to afford a mistake at this point in the game, immediately made one. Goff dropped the first snap of the next drive and Green Bay recovered on Detroit’s 23-yard line.

The Lions looked like they had stopped the bleeding and forced a short field goal attempt for Green Bay, but Amani Oruwariye was tagged with a questionable pass interference penalty, giving the Packers an immediately first-and-goal from the 1-yard line. Jones would punch it in for his fourth touchdown on the next play. 35-17 Packers.

Detroit’s last chance to make this a game ended on third down, when Goff dropped his arm back to pass and the ball—wet with torrential rain—just slipped out of his hand. Though he recovered the ball, the Lions lost 9 yards on the play. The Lions opted not to go for it on fourth-and-12, essentially punting the ball, and game, away.

The Lions would get a defensive stop, but Jared Goff threw a poor interception to absolutely, positively clinch the game.

In the end, Detroit’s defensive effort continues to just not be good enough. They forced more punts this week, but their run defense is not good enough to play a full game of two-high safeties against Aaron Rodgers. Offensively, there’s so much promise there, but there are also far too many mistakes. Last week, it was the pick-six. This week, it was a failed fourth-and-1 conversion and a fumbled snap.

Unfortunately for Detroit, the schedule doesn’t ease up next week with a return back home for a bout with the Baltimore Ravens.

This post first appeared on Pride Of Detroit, A Detroit Lions Community, please read the originial post: here
People also like
How To Make A DIY Nature Mandala Craft
5 Lions Megaways Slot – Pragmatic Play
A Different Script – Preparing for Legal Issues in Life and Medicine
Learn How To Save Money And Time When Tracking Your Trailers
How To Get Rid of Ticks in the Yard – 8 Steps
“The Friend Who May Not Seem a Friend” – The Cat and the Fire, Post 2 of 3
The ‘Blob’ Anomaly and How We are Responsible for It
طريقة زراعة قصب السكر
Why Do I Have These Thoughts?

Lions lead slips away with second-half mistakes, lose 35-17 to Packers