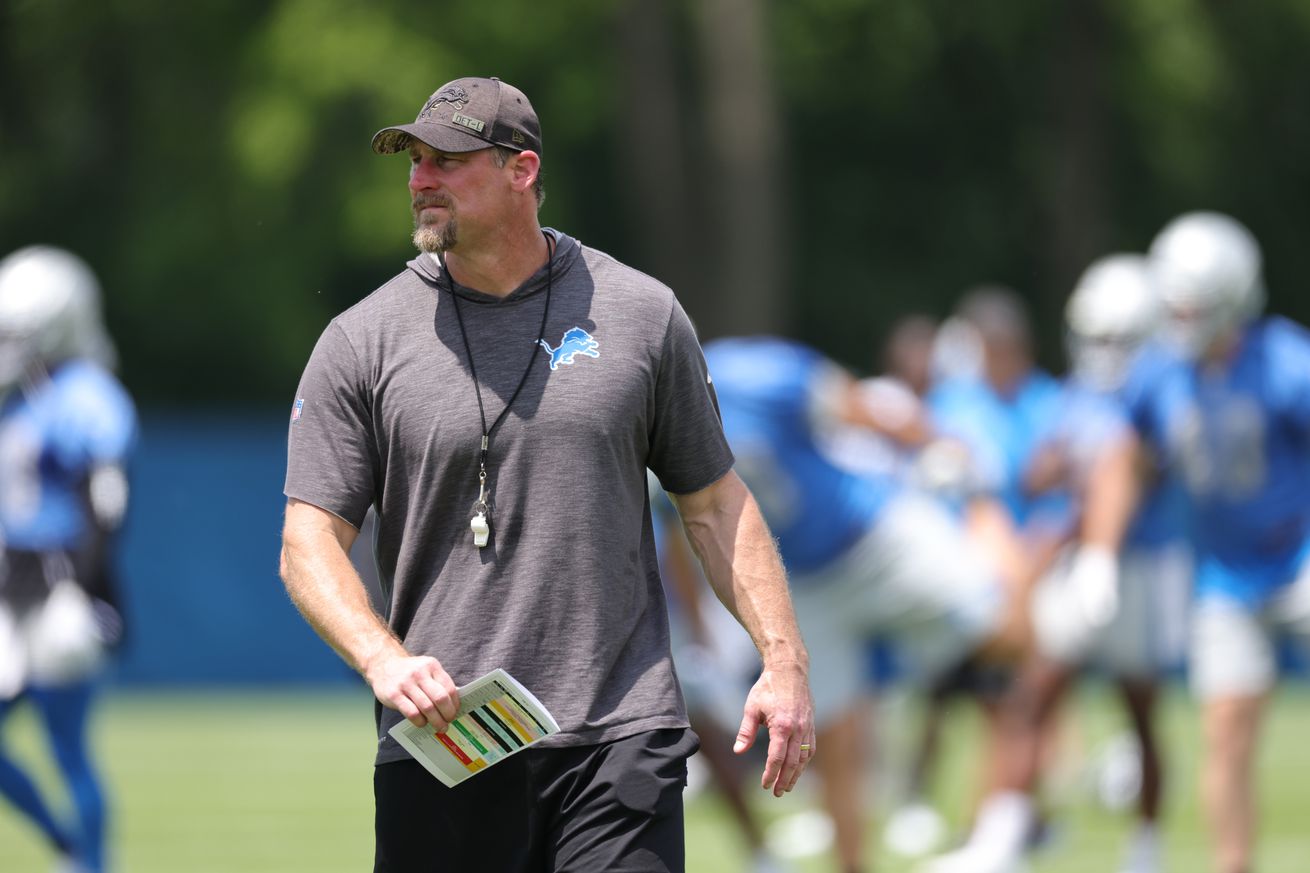 One more week of scaled back Otas, then rest up for training camp.

It’s been an eventful spring for the Detroit Lions and their new regime.

In mid-May the rookies were welcomed into Allen Park for first and second-year player minicamp and we were on hand for observations. Two weeks later the Lions began their voluntary organized team activities (OTAs), two of which media was allowed access to, and once again we were on hand to observe, Jeremy Reisman wrote about OTAs Day 3 and I covered OTAs Day 5.

Next came three days of mandatory minicamp (Observations Day 1, Day 2, and Day 3) but now that these practices have been completed, the local media’s access to the team is over for the summer.

So, what comes next for the team?

Starting next week, the Lions will hold the final four of 10 allowed voluntary OTA practices but things will be scaled back, both in the number of players in attendance—roughly 50 of the 89 players on the roster are expected to be present—and in the amount of work asked of players.

“I think we’ll be going very similar to what we’re doing now,” coach Dan Campbell said. “I would love to trim back some of the early individual stuff, maybe some of the walkthrough stuff, and just get one more segment of competitive 7-on-7 or kind of release work, stacks, bunches, things like that. I think it’ll be very similar to now. The focus will be the young guys, our players, and any players that will stick around. It’ll be some of our rookies, some of those one, two-year guys. There are some guys that I know that are staying are three-year vets, four-year vets. It’ll be good.”

With the majority of veterans attending all three weeks of OTAs and minicamp, the Lions feel like they are ahead of schedule and can afford to give their older players some extra time off to spend with their families, a popular trend in the NFL these days. But that doesn’t mean they’ll just be relaxing in the sun, veterans know there is still work to be done.

“I live out in San Diego in the offseason, so I’ll be out there just working out and getting ready,” wide receiver Tyrell Williams said. “I’m sure I’ll link up with Jared (Goff), because I’m pretty sure he’s out in that area, too. Try to get with him, throw some more, and just get myself in football shape, ready for the season.”

So, most veterans will begin their summer breaks immediately and they will soon be followed by the rest of the roster and coaching staff over the next 10 days or so.

Despite there still being a lot that needs to be accomplished as a new staff, the Lions are prioritizing the mental well-being of their staff and making sure to give them time to be rested before the start of a grueling season.

“I think for the staff, it’s important,” Campbell said. “I want them to get a little break here. They’re going to need it. The season, it’s long and it’s long hours. You’re not going to see your Family. It’s all ball for long periods of time in the day. They need to be able to recharge the battery. I know A-Lynn (offensive coordinator Anthony Lynn) and AG (defensive coordinator Aaron Glenn), they need to get a break, too. They’ll be doing some things over the break.”

Campbell will also take some much-needed time to get his family settled.

“My whole focus is, I’ve got to get my family up here,” Campbell continued. “I’ve got to get everybody moved up here, so when we’re done next week that’s going to be my sole priority is getting them all moved, getting settled in where we’re at, then from there, once that takes place, I’m going to spend those next couple weeks just cleaning up all of the little stuff as it pertains to this team and some of the things offensively, defensively, special teams that I feel like, as a head coach, I can really hone in on and clean up and help the coordinators somewhat if you will and give them a little bit of direction. That’ll be my focus.”

General manager Brad Holmes, who moved his family to Michigan last week, mentioned something similar to Detroit News’ Justin Rogers in a one-on-one interview, noting that his family being here is helping him feel like his life is slowly getting back into place.

So things will slow down a bit for a little over a month, but training camp is right around the corner and in late July the team is expected to be back in Allen Park, preparing for the season.

This post first appeared on Pride Of Detroit, A Detroit Lions Community, please read the originial post: here
People also like
10 challenging UK outdoor adventures for children and teenagers
Sleeping Habits Around the World
Why I Chose to Be Vaccinated Against COVID-19
7 Reasons Why You Should Hire A Female Divorce Attorney
How to Get Rid of Mice – 5 Methods
Five Simple Ways to Build Buzz and Boost your Business