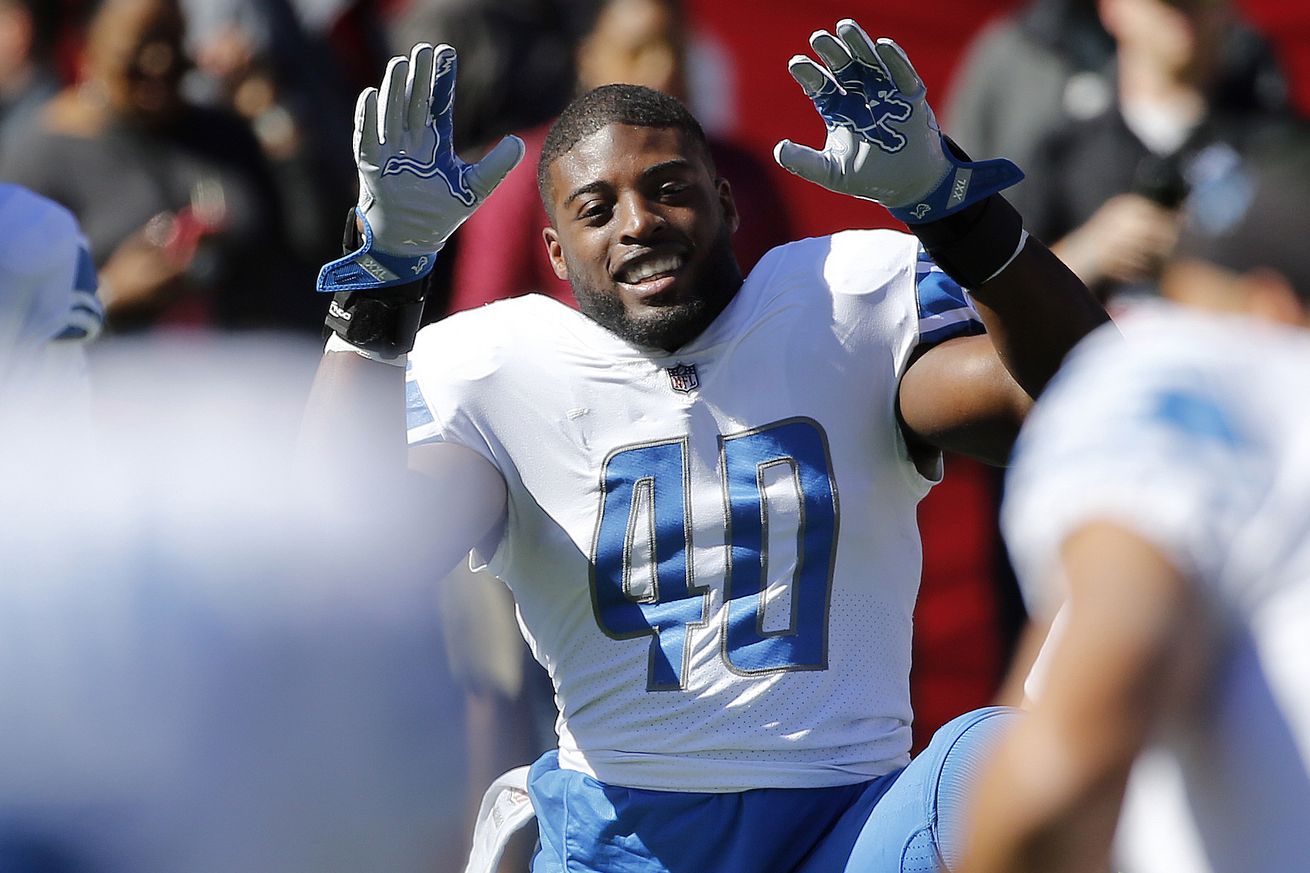 The linebacker has taken on different roles in the Lions defense.

Jarrad Davis played arguably the best game of his career in Week 7 against the Miami Dolphins. The oft-maligned linebacker was all over the field and was a positive against both the pass and the run and played a huge role in the team’s defensive success.

A majority of Davis’ struggles last season were mental. He always had the physical talent needed to succeed but he never could get his head in the right place. The linebacker was awful at diagnosing plays and found himself lost way to often.

If the game against Miami is any indication, the game is mentally starting to click for him.

Biting hard and getting out of position on play action plays was a huge problem for him as a rookie. He would get to eager to chase down the running back and end up way out of position on the ensuing pass. This was not an issue for him against Miami at all.

Davis is lined up on the Edge here. His job is to either set the edge against the run or grab running back Frank Gore in man Coverage. Quarterback Brock Osweiler fakes hand off to Gore and the running back escapes out to the flat. Last season we would often see Davis crash inside to play the run in these situations. Instead, this time he recognizes the fake and breaks outside. Gore makes a quick catch in the flat and Davis is all over it.

The linebacker recognizing the play and quickly getting all the way out to the sideline shows a huge improvement not only between last season and this, but growth within the past few weeks. His previous struggles in coverage were more a matter of his own poor positioning rather than him getting beat. With the game seemingly having slowed down for him this season, his positioning is better making him less of a nuisance in coverage.

With Davis mentally more checked in, his physical talents truly shine. On this play, he came out of deep prevent coverage to chop down a receiver after the catch.

On a third-and-17, the Lions dropped deep into zone coverage. They took away all of Osweiler’s deep options and forced him into a short check down to Kenyan Drake. The linebacker reads the play and quickly flies up field to cut down Drake after the catch. Once he’s got himself heading the right direction, Davis has the speed and raw force to barrel through runners.

Both of the above plays are also good examples of Davis’ improved open-field tackling, which was something else he has previously struggled with.

Davis has rarely played outside of his natural middle linebacker position, but Detroit seems to want to move him around the formation this season. In an above play he came out of a defensive end position and dropped into pass coverage. On this play, he lines up there again and sets the edge in run defense.

He comes off of the edge on this play and crashes down on the pulling guard. Osweiler hands the ball off to Drake and the running back can’t get the edge. Davis forces the ball carrier into the traffic inside and the play is stopped for no gain. This is not a play that registers for Davis in the box score, but his strength on the edge contained a dangerous open-field runner.

Davis has also been a member of the Lions third-down pass rush package. The “NASCAR” package, as they are usually referred to, usually features a group of speedsters who can pin their ear backs and go full throttle towards the quarterback on passing downs. Without Ezekiel Ansah active and with Kerry Hyder listed as a healthy scratch, Davis got the nod.

On this play, Davis is lined up on the interior in a two point stance. He and defensive lineman Da’Shawn Hand run a stunt to get pressure on Osweiler.

Davis crashes into the interior of the of the Dolphins offensive line. He occupies three lineman and creates space for Hand to get around him and get a run at the quarterback.

Detroit sent Davis out with the speed rushers throughout the game. He often would line up on the edge and either speed rush or drop into coverage. While he is not the most effective third-down pass rusher, his use on these key plays shows the Lions’ increased trust in the second-year player.

It was only one game, but Davis was nearly perfect Sunday. He didn’t make any blatant errors and he was great in pass coverage. The Lions also have found ways to play him in different spots adding to his overall utility. Davis has clearly grown as a player under direction of new head coach Matt Patricia and defensive coordinator Paul Pasqualoni. Now they have found new ways to use him in the defense, the possibilities to put his physical gifts to use are endless.