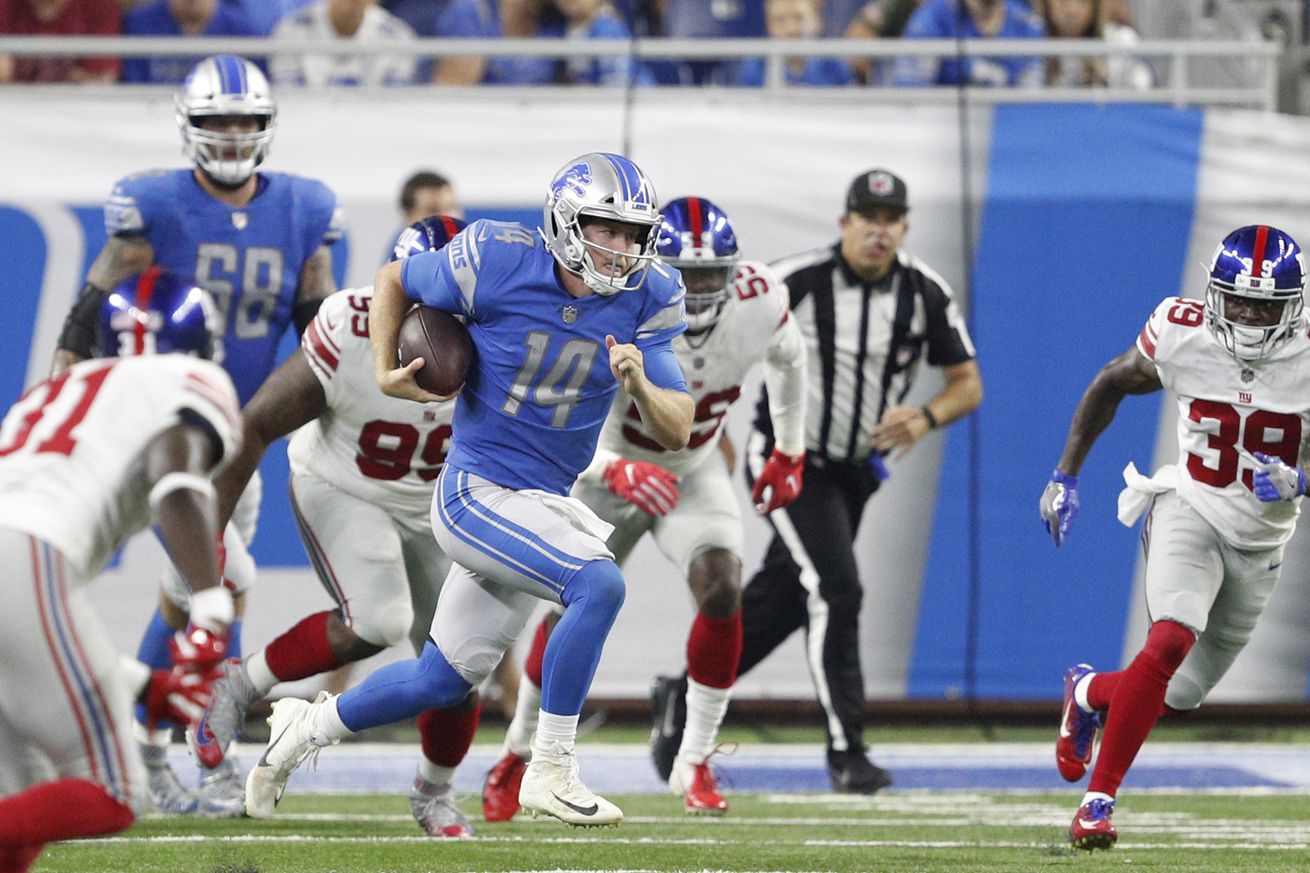 The Lions starting offense had it’s struggles, but that didn’t compare to the subs on both sides of the ball.

The Detroit Lions chalked up their second loss of the preseason, this time against the New York Giants. It was an ugly affair full of mistakes and poor decision making, but we got a longer look at some of the players that have been drawing interest from camp. While the final score was 30-17, it doesn’t tell the full story of the game. The team lost by 13 points, and it was a lot worse than that in terms of how the players performed. So let’s jump right back into this.

darius slay saves what should have been a TD to sterling sheppard (and gives us a finger wag) pic.twitter.com/SXM8pBMjWb

Picking up right where he left off last season, Darius Slay is a beast in coverage who looks like he’s ready to give quarterbacks fits all season. The Giants kept testing Slay, and while he gave up one pass in the middle of the field he also deflected three separate passes. The Lions are going to need his play-making ability on the back end of their defense and he looks ready to rock and roll.

A'Shawn Robinson running around out there in the fourth quarter of a preseason game, with this #Lions D-Line depth chart, is not the best sign for Bob Quinn's second draft pick.

Robinson struggled badly against the Raiders and that same story played out against the Giants. He played the entire game, which isn’t common for someone presumed to be a starter on defense. In fact, the last time I can remember that occurring was with Antwione Williams last season. Williams, like Robinson, came into the season as a likely starter on defense with hopes he’d improved. He too played late in preseason games before being a surprise cut. I’d be stunned if Robinson were cut, but his starter status is certainly in jeopardy the way he’s being used.

Riddick is well known as a receiving back and he showcased his most dangerous route against the Giants. Riddick is an option route master. A linebacker in space has to make a choice to either cover the flat or the inside of the field. If they make a snap decision, as Alec Ogletree did (and Jarrad Davis did later in the game), they run the risk of putting themselves completely out of the play and giving up the free play if they’re wrong. If they wait for the ball, they tend to freeze, giving up a catch to a runner known for being difficult to tackle. Riddick ate Alec Ogletree’s soul to the tune of 42 yards.

Heck of a run by Blount. Kenny Wiggins got driven back 4 yards right where the run was supposed to go.

It’s a good thing T.J. Lang is known for his durability, or the Lions would be in a bad way for interior line depth (Lang is notoriously not durable, for those that miss jokes). Wiggins was a bad part of a weak unit and was beaten so routinely many fans were calling for all starters to be pulled to keep them safe. Wiggins had a good training camp, but performances like his against the Giants are demoralizing.

Another decent return from Brandon Powell. Tough seeing him make the team, but could be a sneaky special teams option for a needy team out there.

Look, there aren’t a lot of guys who had performances good enough to be notable in this game. Powell is a small, slow, but quick receiver who flashed as a gunner in camp. He got to try his hand as a returner and had returns of 27 and 22 yards, which is pretty decent. It’s unlikely Powell makes the team as a fifth receiver, but if he shows his special teams value enough he could make the Lions for that alone.

2nd play of the game Ameer Abdullah fumbles but Ragnow jumped on it. #NYGvsDET

Abdullah seemed to be showcased against the Raiders, and with the start against the Giants it looked like we were in for more of that. Instead, he fumbled the ball on the second play of the day and was barely used after that. Abdullah seems to have a roster spot pretty much locked up, but if he doesn’t have value in the run and passing game then his special teams will need to be more on point than it was in this game.

Jamal Agnew, CB - First-team reps against more than just reserves, it was an up and down day, but he’s showing versatility the team can use.

Ezekiel Ansah, DE - Ansah hasn’t gotten much work due to, of course, injury. When he was inserted into the line, he was moved all over and was a rare bright spot.

Nick Bellore, FB - We had been talking about potentially putting Bellore on the bubble since the team doesn’t seem to value his offensive contributions much, but his special teams ability often goes overlooked and he was excellent there against the Giants.

LeGarrette Blount, RB - The stat line doesn’t look great, but Blount showed off his signature elusiveness and ability to get earned yards.

Tyrell Crosby, OT - Crosby looked good in his debut, and with the Lions giving him a huge share of snaps (the most for OT), he’s getting a long look.

Joe Dahl, OG - Dahl wasn’t great, but it was a better game against the Giants than what he put up against the Raiders.

Dontez Ford, WR - Ford is an extreme long shot to make the roster

Kenny Golladay, WR - Golladay has had some struggles, but he looked alright against the Giants.

Da’Shawn Hand, DE - In our last Stock report, I predicted Hand would be a starter sooner than later. His play with the first team puts that prediction more than on track.

Ricky Jean Francois - RJF started out the day well and hey, at this point anybody who flashes as a pass rusher is worthy of praise.

Kerry Hyder, DL - Hyder’s talents as a rotational pass rusher who could move along the line has shown to be a perfect fit for the new defensive scheme.

Christian Jones, LB - Jones has had an up and down camp, but performances like this one are promising for a player who’s going to be a big part of the defense.

Miles Killebrew, SS/LB - Killebrew has been getting work as a linebacker, and with the coverage issues the unit as a whole has been experiencing, he’s looked alright.

Don Muhlbach, LS - Muhlbach got mentioned twice, at least, on the live broadcast. How many long snappers can make that kind of claim?

Michael Roberts, TE - We’ve dogged on Roberts for his play and he’s deserved it. This wasn’t a bad showing, though, and progress is good to highlight.

Sylvester Williams, NT - Williams wasn’t great, but we did almost get to see a fat guy touchdown when he scooped a fumble (ended up being ruled incomplete) and ran.

Tavon Wilson, SS - Wilson had a good go of it against the Giants, and we can only hope that kind of performance carries over to the regular season.

Alex Barrett, LB/DE - With Devon Kennard finally healthy, Barrett has seen less work. Somehow he looked less effective than when he was working with the first team.

Freddie Bishop, LB/DE - Bishop has had a fine couple of weeks.

Brian Brown, WR - He’s still on the roster, but you wouldn’t have known it watching the game.

Matt Cassel, QB - Cassel played poorly against the Giants. The interception wasn’t on him, but everything else was. Nothing but short passes and nothing dynamic.

Antwuan Davis, CB - I would say that he’s not long for the roster, but the Lions haven’t signed or cut anyone in what seems like forever, so who knows?

Jarrad Davis, LB - Davis started out the day by ending an entire drive all by himself. It was all downhill once he started playing in coverage.

Taylor Decker, OT - It was a bad day for Decker. One of the highlight plays made against him was actually on Ragnow, who was supposed to help, but the other ones were all Decker getting beaten.

Kerryon Johnson, RB - With as much hype as Kerryon has (deservedly) received, this type of showing is a bad day. His snap distribution is likely to improve greatly next week, though.

Wesley Johnson, OC - Johnson was a poor blocker and his most notable moment on the day was a penalty.

Nevin Lawson, CB - Lawson has a knack for playing very close coverage but still giving up the catch. More of that in this one.

Steve Longa, LB - Longa unfortunately injured his leg. Presumed to be an ACL, his season may be over before it started.

Bradley Marquez, WR - Marquez repped fifth for most of camp, but with others shining he’s faded quickly to the background. He didn’t play a single offensive snap on Friday.

Rolan Milligan, SS - If I were in the business of writing hatchet job articles, I could build a strong portfolio just by using Rolan Milligan clips from this game.

Matt Prater, K - Prater missed a kick. He doesn’t have any real competition, but still sucks when he dinks one off the uprights.

Frank Ragnow, OG - Ragnow had a much tougher go of it in this one, showing it’s not an easy road to being an NFL starter. Communication is the big issue right now, which should come with time.

Teo Redding, WR - Matt Cassel and Jake Rudock didn’t attempt any downfield passes. They didn't attempt any intermediate passes, either. It’s tough to stand out when that’s your strength and this is your passers.

Jake Rudock, QB - Don’t let his statline fool you. When Rudock left the field for Cassel, he had thrown a pretty 7/9, but at only 31 yards it was all short dump passes. That didn’t stop when he got later opportunities.

A few people now have mentioned my take on Jake Rudock. Literally every single pass he threw was a short pass. Easy to complete a lot of passes for a high percentage when every pass is a few feet away. pic.twitter.com/aBCdEIDag8

Jeremiah Valoaga, DE - Two games in a row with nothing to show for it.

Rick Wagner, OT - It wasn’t the best day from the Lions starting right tackle. Whether it’s communication or what, time will tell.

Luke Willson, TE - I’m beginning to wonder if maybe signing a guy who has caught only 15 passes in each of the past two seasons and expecting him to start may have been hasty.

Anthony Zettel, DE - Zettel was fine for much of the game, but on a Kyle Lauletta scramble he took a horrid angle and simply lacked the athleticism and recognition to recover when Lauletta cut inside. A scoring play that should have been stopped.

So what do you think? Did I have anyone stock up that you think stunk, or anybody I noted as struggling you think I’m being unfair about? Anyone I didn’t mention that you think needs to be in one category or the other? Let us know in the comments. As always, look forward to hearing your thoughts!