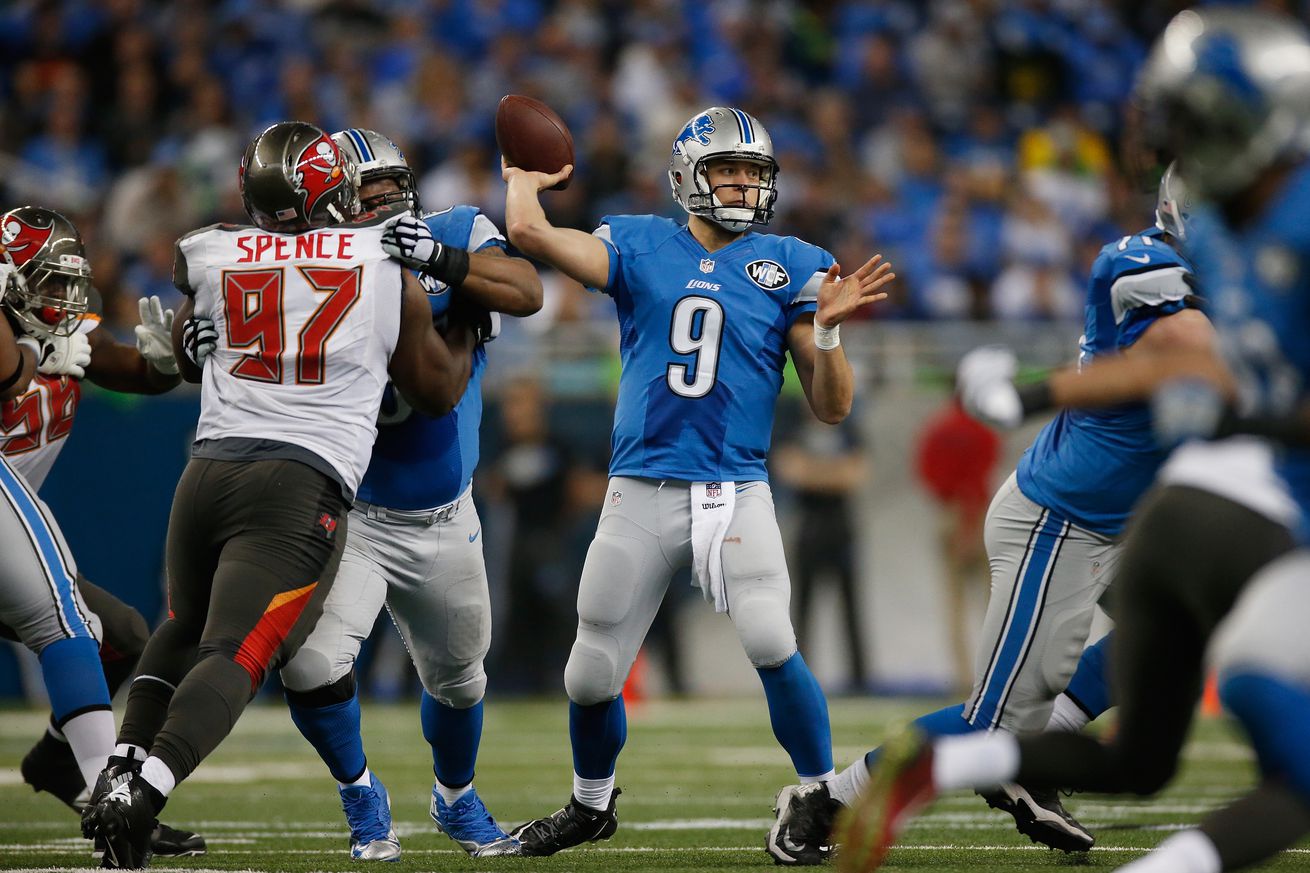 Our Week 14 statistical breakdown of Lions vs. Buccaneers.

We’re onto the final quarter of the season and the Detroit Lions and Tampa Bay Buccaneers are not where they want to be. For the Lions, the postseason is still barely within reach, and with the Falcons’ win on Thursday, it seems like beyond a pipe dream at this point.

The Buccaneers were one of the most hyped teams in the offseason, but everything collapsed and now they’re at 4-8 just left to ponder what exactly went wrong this year.

There doesn’t appear to be much other than pride on the line this week, but let’s hope for an entertaining game anyways. Here’s our statistical preview. 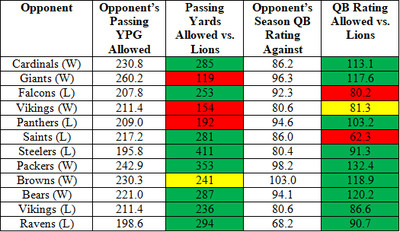 Out of the bye week, Matthew Stafford and the Lions’ passing offense has had to go up against some of the best defenses in the NFL. But the Lions have held strong and come out statistically on top week after week. Stafford has continued his fantastic streak of games since Week 8, though it has largely gone unnoticed since Detroit has only gone 3-3 over that time.

In the past six games, Stafford is completing 67.8 percent of his passes for 9.4 yards per attempt, 10 touchdowns and three interceptions (108.3 passer rating).

As a team, the Lions rank ninth in passer rating (96.9), seventh in yards per attempt (7.8) and ninth in completion percentage. Dare I say, this Lions pass offense has finally crossed over into a top-10 unit... and it’s about time.

However, this week could be drastically different. Stafford’s status for Sunday is unknown, although his practice on Thursday was extremely promising. Still, there’s a pretty good chance Stafford won’t be passing at 100 percent with his hand injury, and even if he is, he’ll be missing anywhere between zero and three of his starting offensive linemen. 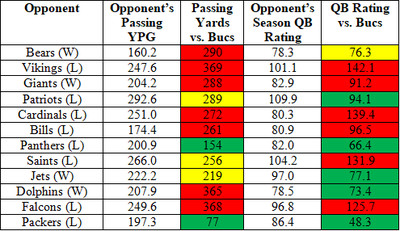 While Football Outsiders has this Bucs pass defense ranked second-to-last, I see it a little differently, especially lately. Though this defense has been hemorrhaging yards all year through the air, they’ve actually held up pretty well in terms of passer rating, holding four of their past six opponents below their passer rating average.

Their passer rating numbers look a little low because of a sudden increase in interceptions. Five of their season total of 10 interceptions have come in the past four games.

But when you look at the grand scheme of things, the true nature of this pass defense comes out. It is really bad. Though they rank 23rd in passer rating allowed (96.1), they’re 31st in yards per attempt (7.9) and 28th in completion percentage (67.0).

And if you’re worried about the Lions’ ability to protect Stafford, the Buccaneers pass rush is literally the worst in the league, tallying just 17 sacks all year (32nd). They also have the worst adjusted sack rate in the NFL.

Player to watch: Kenny Golladay. The Lions lead the league in passing plays of 40+ yards with 12 on the year. Four of those have come from Golladay despite the fact that he has only played in seven games this year. The Bucs have given up the third most plays of 40+ yards through the air, so it could be bombs away on Sunday.

Advantage: Lions +2.5. Under normal conditions, this could be a rare +3 or +4 advantage, but because of the injuries to Stafford and the offensive line, I’m a bit more reluctant to give Detroit a huge advantage here.

Still, if Stafford is the quarterback for all four quarters, and you can barely tell that his hand is injured, expect him to put up a 300+ yard day with a couple scores. 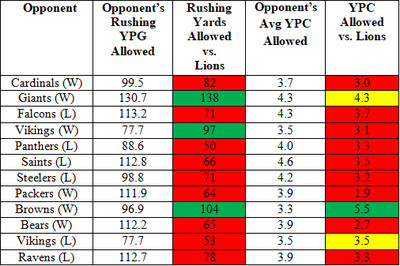 With or without Ameer Abdullah, this running game is awful. Sure, it was nice to see Tion Green run it successfully twice against the Ravens, but it was still another failure by the unit overall. Detroit has now outgained the defense’s YPC allowed average just once all season.

In total, the Lions are averaging 3.4 yards per carry (t-30th) and are only rushing for first downs on 16.1 percent of carries (31st). They still are horrible at third-and-short runs. According to Football Outsiders, the Lions convert on third or fourth down and two (or less) just 29 percent of the time. The league average is 63 percent, and the second worst is 38 percent. That is unbelievably awful. 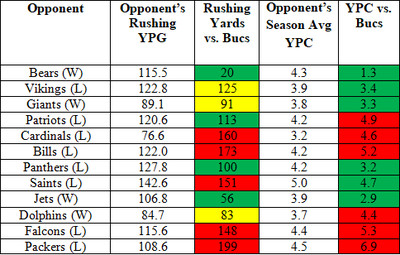 The Bucs run defense has been all over the place, but as of late, it has been pretty darn bad. Overall, six of their 12 opponents have surpassed their season YPC average against Tampa, while eight of 12 met or surpassed their rushing yards average.

Average is a good word for this run defense. They’re allowing 4.3 yards per carry (t-19th) and allowing first downs on 21.2 percent of runs (19th).

Player to watch: Gerald McCoy. Although McCoy only has 5.0 sacks on the year, he still has nine tackles for loss and is still a beast in the middle of that Bucs defensive line. He’s almost guaranteed to have at least one tackle for loss Sunday.

Advantage: Bucs +1. Tampa is allowing 4.3 YPC, which is the worst run defense the Lions have faced since Week 7 against the Saints. Unfortunately for Detroit, it doesn’t seem to matter what kind of defense they face, and their offensive line is in tatters after suffering several injuries. Even if the Lions can sport a mostly healthy line, it’s hard to imagine them finding any success on the ground. 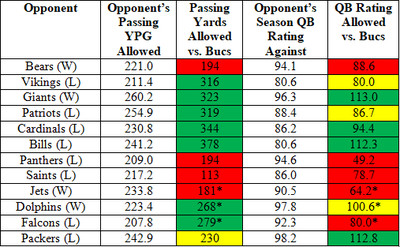 *Games in which Ryan Fitzpatrick started

It has been an up-and-down season for the Buccaneers pass offense. Things started out promising. Jameis Winston met or surpassed the opponent’s average passer rating allowed in five of his first six games. But things quickly went downhill from there, and the Bucs offense now seems to be mid free-fall. The chart above is a bit misleading due to Ryan Fitzpatrick’s poor three-game stretch, but overall, this is still a somewhat average passing attack.

Per usual, his favorite target is Mike Evans, who is currently 19th in the NFL in receiving yards with 735, but he surprisingly only has four touchdowns. 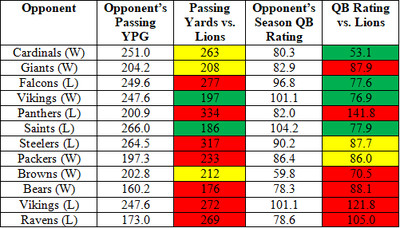 This Lions pass defense is falling apart. After an extremely promising start to the year, the Lions have looked completely overmatched against some of the worst passing offenses in the league. None of it seems to make any sense. The Lions held their own against the Falcons, Saints and Vikings earlier in the season, but they were outclassed by the Browns, Bears and Ravens recently. It’s bizarre and I don’t like it.

While part of that can be explained by how poor Detroit is defending the run recently (more on that later), a lot of blame needs to be put on the secondary. After forcing nine interceptions before the bye week, the Lions have just two in the past six games.

Player to watch: O.J. Howard. That same pesky problem of 2016 is back again: The Lions cannot seem to defend opposing tight ends. According to Football Outsider, the Lions have the second worst defensive DVOA against tight ends. Meanwhile, Howard has seven catches for 121 yards and a touchdown in his past three games.

Advantage: Bucs +1. Darius Slay is capable of stopping Mike Evans, but it’s everyone else that I’m worried about. DeSean Jackson could give the Nevin Lawson/DJ Hayden combination trouble, while I fully expect Howard to go off against a poor linebacking corps. 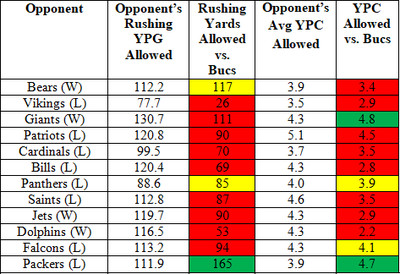 I know what you’re thinking. No, I didn’t accidentally put the Lions’ running offense chart on here twice. The Buccaneers are almost just as bad running the ball as Detroit. They’ve only reached 100 team rushing yards three times this season, while they’ve only rushed for over 4.0 yards per carry four times and failed to reach 3.0 YPC four times.

However, last week Tampa shifted backs to Peyton Barber, who saw some success against the Packers, rushing for 102 yards and 4.4 YPC. But Doug Martin appears to have recovered from the concussion that held him out of last game. Will the Bucs stick with Barber or go back to the veteran Martin, who is averaging just 3.2 YPC this season? 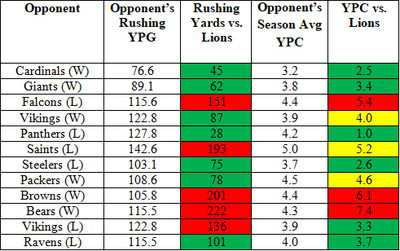 This chart is... surprising. It feels like the Lions are in the midst of one of the worst string of games in terms of their run defense. However, the past two weeks have actually been successes by On Paper standards. Though they’ve given up 118.5 rushing yards per game in that stretch, they’ve only allowed 3.5 yards per carry. Maybe they’re finally rebounding?

Over the course of the season, they’re allowing 4.2 yards per carry (t-17th), but a whopping 26.2 percent of carries are earning first downs against the Lions (31st).

Player to watch: Jameis Winston. While Winston hasn’t been much of a running threat this year (his highest game total is 18 rushing yards), the Lions have been especially prone to allowing quarterbacks to beat them with their feet. Tampa runs a little read-option, so don’t be surprised to see more Lions defensive ends getting caught inside while Winston kicks it out.

Advantage: Lions +1. This doesn’t feel right, and I’ve got a sickening feeling that I may look like a fool after Sunday, but objectively speaking, the Lions should have the edge here. They’ve actually settled down as a run defense as of late, and the Buccaneers running game is almost as bad as Detroit’s, despite Barber’s good performance last week.

On Paper is now 8-4 on the year after correctly predicting a Ravens win last week. However, my score prediction of 23-20 was nowhere near the final score of 44-20... but neither was anyone else’s prediction. The closest prediction in the comment section came from Sickness Gone, who predicted a final score of 27-16 Ravens. 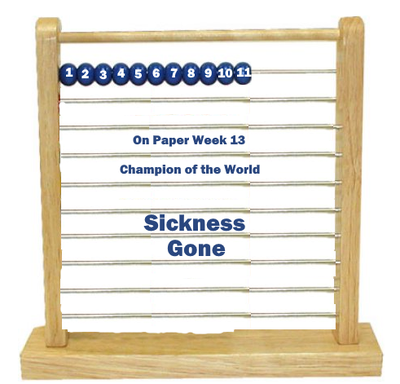 Detroit Lions Head Coaching: Home Edition comes with everything you see above:

*Batteries not included. Also, abacus may be missing one or two beads, depending on the week.

The Lions come out with a +1.5 advantage, which I’m guessing is going to be the largest advantage you’ll see for Detroit in the remaining four games. This is a very favorable matchup for the Lions, and it’s a game they should absolutely win.

Obviously the biggest intangible right now is the health of Matthew Stafford. Finger injuries have drastically impacted his effectiveness in the past, and unfortunately we have no real frame of reference for this specific injury. But considering reporters said he had his normal zip on the ball during Thursday’s practice, I choose to be optimistic. Lions 31, Buccaneer 26.