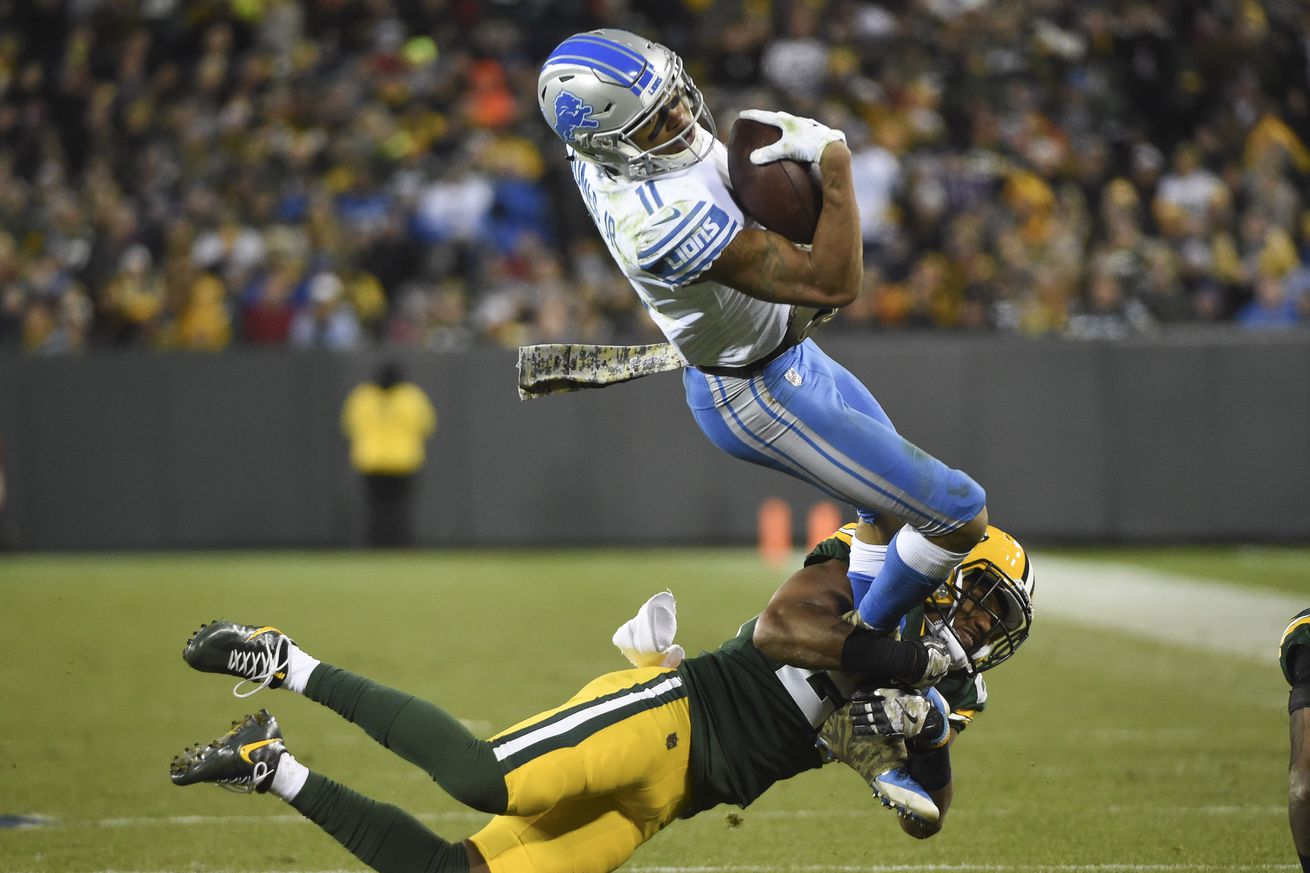 The Lions lit Lambeau Field on fire and never let the Pack put it out.

The Detroit Lions came into Lambeau Field with pretty low expectations coming off a three-game losing streak. They did not leave disappointed, however, as they steamrolled the Packers offense and defense all game, with the final outcome never truly being in doubt. Believe it or not, even in a game like this there were some people who didn’t play as well, so as usual we’re going to highlight the good and the bad.

TD No. 2 for Marvin Jones Jr. on #MNF! pic.twitter.com/GYvwoqqoVo

Marvin Jones is a Packer killer and he was hungry. Stafford was dealing to Jones early in the game and he’s been one of his favorite targets in the end zone the past couple seasons. Stafford threw a beauty-of-a-timing throw to the end zone with Jones running a go, just placing the ball in a spot and letting Jones go up and get it, and he did not disappoint. Not one, but two touchdowns in Lambeau field, the last of which was an answer to the Packers finally getting into the end zone.

Abdullah had more than 180 touches in between last fumble and tonight. Now has two. https://t.co/uaMvQeinsa

Abdullah was finally given the ball in the red zone and rewarded the team with points. I was hoping to put him on his own Stock up write up even if his poor YPC continued. Unfortunately, while up by 14 he fumbled the ball and it was recovered by the Packers. The team was marching and had a chance to put a final nail in the coffin, preventing any chance of a comeback, but he lost the ball on a pile. Everyone has been calling for Abdullah to get more opportunities than he’s been seeing, but giving up the ball when you’re both trying to kill clock and put final points on the board and you’re gonna get dinged for it. Abdullah did it not fumble just once, but twice, and the second time was right on the goal line. Two fumbles, one lost, not good at all.

@Ebron85 gets way more hate than he deserves. Give the guy some confidence and he’s a playmaker

Ebron has quietly been having a good season as a blocker, but his work as a receiver has bordered on bad to awful in most games. His blocking was once again pretty good, even if Gruden was inexplicably saying it wasn’t while he was stonewalling Clay Matthews. As a receiver, Stafford wasn’t giving him too much of a challenge with his targets, but Ebron went without drops and picked up one easy catch and another with a little YAC that had a bit more difficulty to it. Ebron has needed some confidence-building plays and he got several, squandering none of his opportunities.

Quandre Diggs' lack of speed has been an issue in both of the past few weeks. Jamal Agnew in line for more defensive snaps? pic.twitter.com/Ilu5LzGGfy

Diggs was okay for most of the game and even had another one of his patented TFLs. Tackling ability isn’t what lands him here, though, but his foot speed. For the second week in a row Quandre Diggs got absolutely roasted by a slower receiver, and if it weren’t for a throw with a bit too much and a receiver who just couldn’t even, it was probably a touchdown. The Lions can’t play cover 3 every play, and eventually they’ll need Diggs to be able to man up. If his speed continues to be a problem, the team will have to figure something out.

Am I crazy or is Mihalik 10x better than Robinson

Against the Steelers, Mihalik played quite poorly even though the Lions were largely able to hide his play. Against the Packers, he played far better and was even left on an island against Nick Perry several times and just ate him for lunch. The Lions didn’t get much done in the run game, as is the usual, but Mihalik was very good outside a few snaps in this one and having a LT block well is something we haven’t seen much of this year.

Next time at the goal line: give it to Glover Quin.

I don't know how, I don't care how, he will score, because he is my god.

Could we put Quin on here every week? Probably. He keeps coming up with reasons to put him here. Whether it’s a game-sealing interception, pick six, a fumble or, like this week, a killer TFL and later a TD-saving tackle on a blown coverage outside, Quin is always finding ways to be around the ball and affect plays. Quin is the best safety in the NFL in 2017 and he keeps on finding new ways to be impressive.

Jared Abbrederis, WR - Abbrederis didn’t do much, but he had a nice block on Abdullah’s touchdown run, so he’s getting work.
Jamal Agnew, KR/PR/RB - Agnew has a role on offense and it’s so dang awesome. Sure, it didn’t result in much, but a neat little run and fake out that gave Abdullah space is valuable.
Jace Billingsley, WR - Billingsley didn’t get offense work, but he opened the game with a ST tackle so that’s something.
Jarrad Davis, LB - Davis had a pretty good day. I couldn’t point to any specific play he blew up, but no breakdowns and a solid control of the defense is always good.
Graham Glasgow, OG - Is...Graham Glasgow becoming good at football? Back-to-back strong performances. I think it might be a thing.
D.J. Hayden, CB - Hayden had a sweet pass breakup down the sideline that was highlight-worthy.
Jeremiah Ledbetter, DT - After a strong start to the season, Ledbetter kinda faded. He showed up a couple times against the Pack, nice to see him back a bit.
Theo Riddick, RB - If Riddick was fast instead of just quick, he’d have a very long receiving TD. He still got a very long catch and run, making a lot out of a field of green grass in front of him.
A’Shawn Robinson, DT - A’Swat was going to get his paws on a kick at some point this season.
Darius Slay, CB - We got a couple of Darius Slay finger wags in this one. Love seeing those.
Jacquies Smith, DE - The new guy got a lot of work with Jeremiah Valoaga inactive, and was pretty good from what I saw.
Akeem Spence, DT - Spence was horrible against the Steelers, but bounced back in a big way against the Packers. Almost got a couple sacks. Almost.
Matthew Stafford, QB - Stafford was dealing and carved up the Packers defense like it was Thanksgiving and he something something Turkey hole (I hate Jon Gruden).
Travis Swanson, OC - I’m not sure Swanson was good per se, but he wasn’t terrible so that’s an improvement over last week.
Teez Tabor, CB - The Lions second-round pick not only played, but netted a couple of tackles, his first on the year.
Golden Tate, WR - Seven catches for 113 yards and, as usual, a ton of it after the catch. Man, Tate is fun to watch.
Rick Wagner, OT - Wagner has been pretty inconsistent this year, but this was hopefully a bounce back for the starting right tackle.
Tahir Whitehead, LB - Whitehead has had a pretty strong season, and he looked good once again in this one.
Tavon Wilson, SS - He didn’t look as good early, but came up big later in the game.
Anthony Zettel, DE - Zettel came into the season on fire, but has been ghostly lately. He abused the Packers OL pretty handily, despite only one sack.

Ezekiel Ansah, DE - Ansah wasn’t much of an impact player in this one and there was a whole lot of “almost” to his game again.
Emmett Clearly, OT - Cleary only came in for a few snaps when Mihalik went down. They weren’t good and he mercifully left the field.
TJ Jones, WR - Jones was fine, but after a couple of very strong weeks this was a pretty lackluster performance.
T.J. Lang, OG - Look, Lang is really good and he played well. But dude tackled his own running back. That’s some conspiracy theory stuff in Lambeau.
Nevin Lawson, CB - Lawson did alright in coverage, but he netted another special teams penalty. Gotta cut that out.
Sam Martin, P- Geez, what kind of punter doesn’t put up a single punting yard?
Jeremiah Valoaga, DE - A surprise keeper this preseason, Valoaga has been a decent rotational piece, but found himself inactive in Lambeau.

Jim Caldwell is 2-2 in Lambeau Field, including a blowout victory in this one.

It didn’t always work and it wasn’t always pretty, but it’s hard to say that Jim Bob Cooter was his normal, predictable self in this game. Sure, he still called a run on nearly every first down and there were plenty of plays that were telegraphed in the run game. Still, we got a TE screen, a flea flicker, some red zone running by Ameer Abdullah and some downfield passing to get the offense moving against a porous Packers defense. Something had to give eventually, and this was a good sign moving forward.

Austin went to a less aggressive bend-and-don’t-break defense for a large portion of this game, which I wasn’t particularly fond of. He showed plenty of aggression when it mattered, calling blitzes and disguising his coverages to confuse Brett Hundley and the Packers’ struggling offense. There weren’t any significant breakdowns, like the ones we saw last week, and the defense held to their assignments to keep there from being any Lambeau Leaps.

A kick block? What? Yes, the team was helped out by a third-team long snapper putting it too low, but you want to get A’Shawn Robinson with hands up on a kick and you’re going to get one eventually. There wasn’t a lot in the return game, but he bottled up the Packers returners despite giving them designed opportunities.

This post first appeared on Pride Of Detroit, A Detroit Lions Community, please read the originial post: here
People also like
Hearing Aid Accessory – Receivers
Top 10 Things to do in Panama, Where to Stay, Important Things You Need to Know
The Friday Roundup – Video Editing Basics and YouTube Tips
What would happen to a modern-day Moses in America?
POCO M4 Pro Review: Budget Phone Done Right
Jason Statham Beard: How to Copy His Look Step-By-Step
What Exactly Predictive Analytics Is And How It Helps Businesses To Grow Faster?