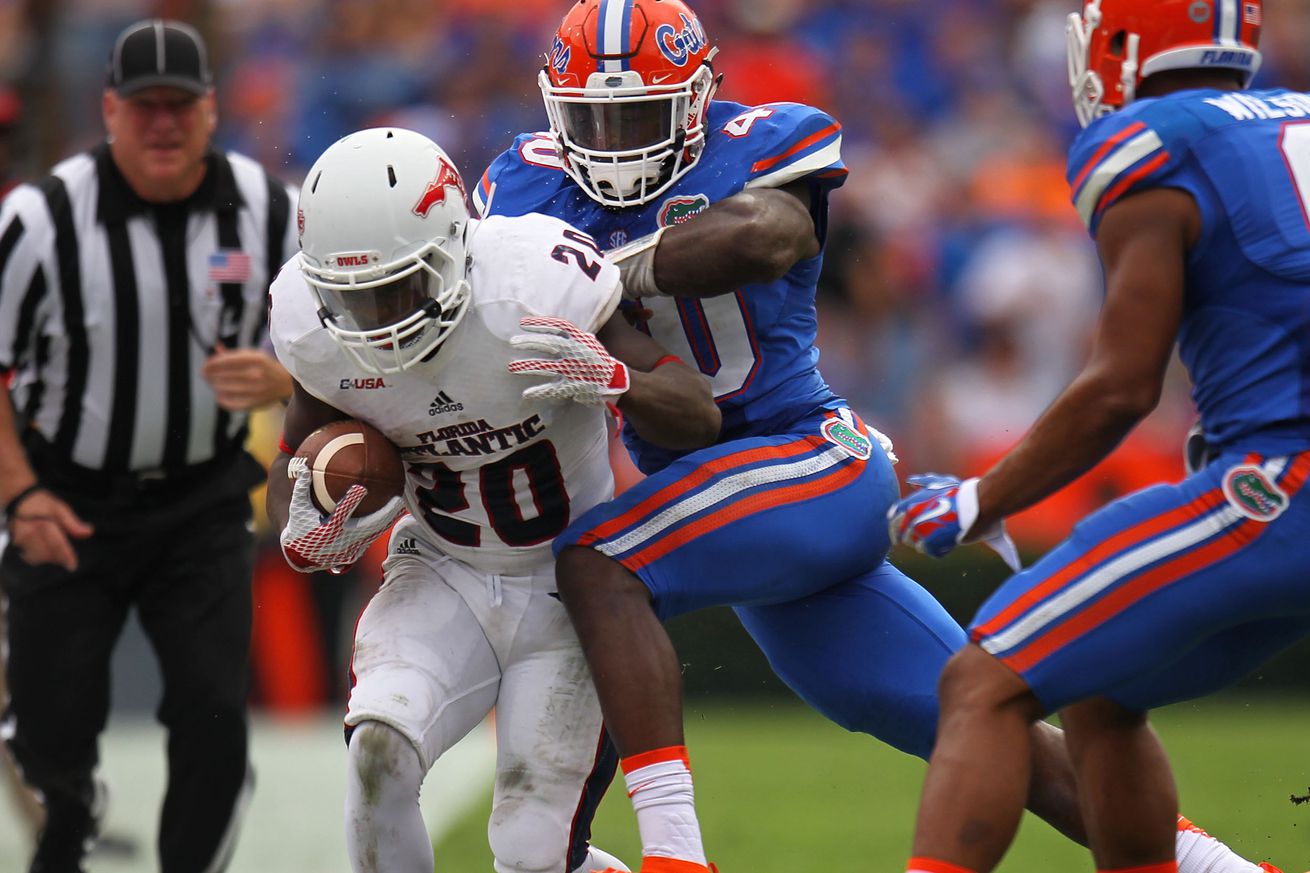 Lions first-round pick Jarrad Davis brings speed and leadership to a defense that lacked both.

The 2014 Detroit Lions defense featured an elite pass rushing unit led by Ndamukong Suh and Ezekiel Ansah, an emerging secondary and a linebacking corps that was more than worth its salt. That defense has been wiped out by injuries and free agency, leaving a putrid roster for Bob Quinn to build from when he was hired prior to the 2016 season. He addressed some of the depth concerns, but with all three phases of the defense needing to be repaired or rebuilt, there was a lot of work to do. After addressing the offensive line in the 2016 draft and 2017 offseason, Quinn made his biggest addition to the woefully thin linebacking group by drafting Jarrad Davis 21st overall in 2017.

There’s no need to rehash just how bad the Lions linebacking corps was in 2016, I think we’ve pretty well exhausted our lexicon of negative superlatives to explain that group. With Tahir Whitehead playing the worst football of his professional career alongside a mangled group of special teamers and a small-school rookie, the group needed more help than the Lions passive pass rush and limited secondary could provide. So Bob Quinn went to work and put into play a somewhat risky long-term plan to correct the entire linebacking group all at once, something fans genuinely appreciate.

Antwione Williams was selected in the fifth round of 2016 and was not expected to start that season. Starting on special teams as expected, he was thrust into action early due to DeAndre Levy’s injury, which was followed by others. Williams immediately struggled even in a limited role. His play had some long-term promise, but it wasn’t great. What it did show was that he can play as a Sam linebacker when called upon or in limited capacity elsewhere. This isn’t a huge role in the Lions defense, who are poised to spend more than 70 percent of their plays in nickel or dime with only one or two linebackers on the field. It isn’t a huge role, but it will be an important one if the Lions can just inject some speed and range to the rest of the group. It’s a copycat league and teams are wisely using the blueprint a few teams have tried, but was truly refined by the 2016 Atlanta Falcons.

Enter Jarrad Davis and Jalen Reeves-Maybin. The Lions have already stated that Davis is going to take over from day one at Mike linebacker, which pushes Jalen Reeves-Maybin to the Will spot. I was a bit surprised when I saw some scouting reports claiming that Davis would struggle with play-calling duties as a pro, since I never saw any indication of that in his game tape. His speed and athleticism are fantastic, which we’ve looked at here on the site and will probably keep circling back to since it’s so awesome. His leadership, however, is something that is often overlooked.

The departure of DeAndre Levy left a huge void in the Lions defense, a void bigger than just his play on the field. That kind of leadership by example and hard nosed style isn’t easily taught, it’s developed. The signing of Paul Worrilow hinted strongly that the Lions were going to find their defensive quarterback and groom him with one of the better teachers in the league. Jarrad Davis is that defensive quarterback. There is an expectation that in 2018, the Lions’ starting linebacking group will likely be some combination of Davis, Reeves-Maybin, and Williams. More importantly for the Lions, Jarrad Davis should be leading the entire defensive unit by the time the 2017 season kicks off and should continue to lead it through 2018, 2019 and beyond.