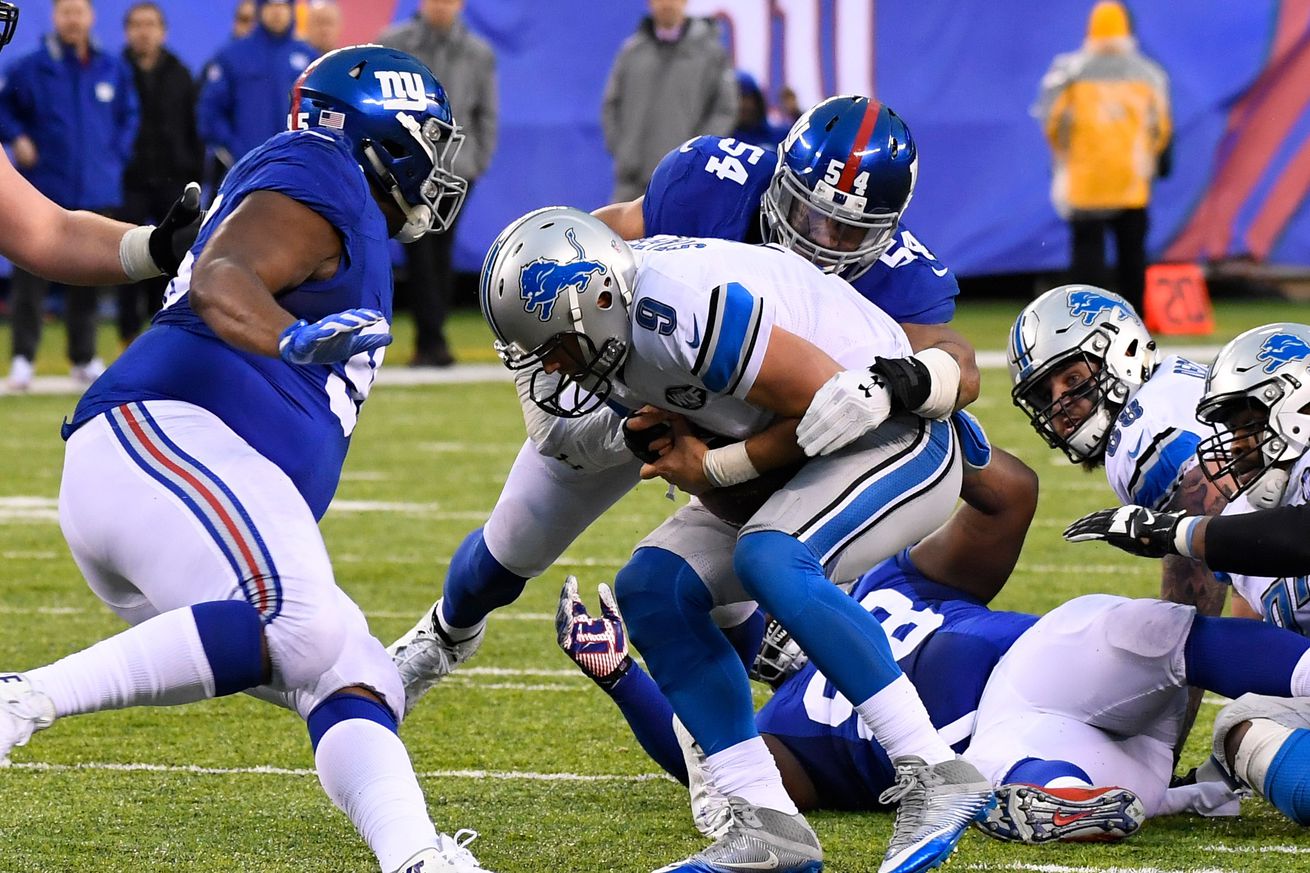 Matthew Stafford is down, but not out of the MVP race.

The Matthew Stafford hype train was nowhere to be seen in Week 15, as the Detroit Lions dropped a “Game of the Week” to the New York Giants. The Lions’ offense only managed six points on the day, and Stafford’s final line was an unimpressive 24 for 39 for 273 yards, 0 touchdowns and 1 interception. His play was definitely better than the final line suggests, but the truth is the Lions needed an MVP kind of performance from Stafford to win that game and they just didn’t get it. This week he falls out of the top five MVP candidates entirely, but we’ll talk more about that later. Here are my top five players right now.

Matt Ryan didn’t have much of a challenge this week as he lit up a poor 49ers’ defense early and coasted the rest of the way. Atlanta scored a touchdown on four of their first five possessions. They would have scored on all five were it not for a goal line fumble from Devonta Freeman.

Ryan didn’t do anything spectacular in this game, but he was still very good. He leads the league in passer rating (114.8), yards per attempt (9.3) and is third in completion percentage (68.6). The Falcons are on the verge of clinching a playoff spot and Ryan’s spectacular play is a huge reason for that.

You can use all of the offensive line arguments you want with Ezekiel Elliott, but the man is leading the NFL rushing race by over 300 yards and that’s extremely impressive, regardless of whether it’s a rookie doing it or not.

Elliott also leads the league in rushes of 20+ yards (13) suggesting he’s fully capable of blowing up a big play at any moment, and his 13 rushing touchdowns is second in the league, making him a huge red zone threat, too. Elliott is the full package right now, and it doesn’t matter if you throw a solid defense like the Buccaneers at him right now, because he’s tearing them apart, too.

The Patriots didn’t rely on Brady much this week, so he stays where he is. Brady completed a season-low percentage of passes, but this was a good Broncos’ defense and he stayed out of the way while his running game and defense took care of the rest. A lot of people use the suspension argument against Brady for MVP consideration, but this game is more of a reason he shouldn’t be the top candidate despite his statistics. The Patriots did just fine in a game they mostly used him as an afterthought. New England ran the ball more than they threw it, and their defense carried them to the win, not Brady.

Before you block this site for the rest of eternity, send me death threats and call me a Packers spy, hear me out. Aaron Rodgers has been absolutely on fire down the stretch, putting the team on his back with a bum hammy.

We like to talk about how Stafford has no help from a bad defense and an ever worse running game, but Rodgers is in a very similar situation, and with worse receiving options. On Sunday, he finally did get the benefit of a running game via an unlikely source—wide receiver Ty Montgomery, but check out Rodgers’ stats over their past five games:

The Packers went 4-1 over that stretch and suddenly can win their division by winning out. After proclamations that Rodgers was done, he suddenly ranks fifth in passer rating (100.3) and second in passing touchdowns (32). Like it or not, Rodgers is back, if he ever even left in the first place.

With Matthew Stafford and Derek Carr not having notable weeks, it’s time to give a defensive player some love. Vic Beasley is quietly having a career year. He leads the league in sacks with a whopping 14.5, and has six forced fumbles. The Falcons’ defense gives up a lot of points and yards, but Beasley is good for nearly one-game changing play per game. Just watch him track down Colin Kaepernick here (h/t to Ryan Mathews for showing me the way of Beasley):

The closing speed by Vic Beasley

Say hello to the NFL leader in sacks with 14.5#SFvsATL #RiseUp https://t.co/AbpUiugElm

Compare that to Rodgers’ statistics above and you can see why the tide is turning.

The good news is Stafford has two games—both likely to be primetime games—to change people’s minds. If he manages to lead Detroit to two straight victories and looks like he did earlier in the season, he will absolutely shoot back up these rankings and could even come for Matt Ryan. Winning the NFC North would be no minor accomplishment, and if he does it for all of the league to see, people will start paying attention. That all starts on “Monday Night Football” against the media-darling Cowboys this week.