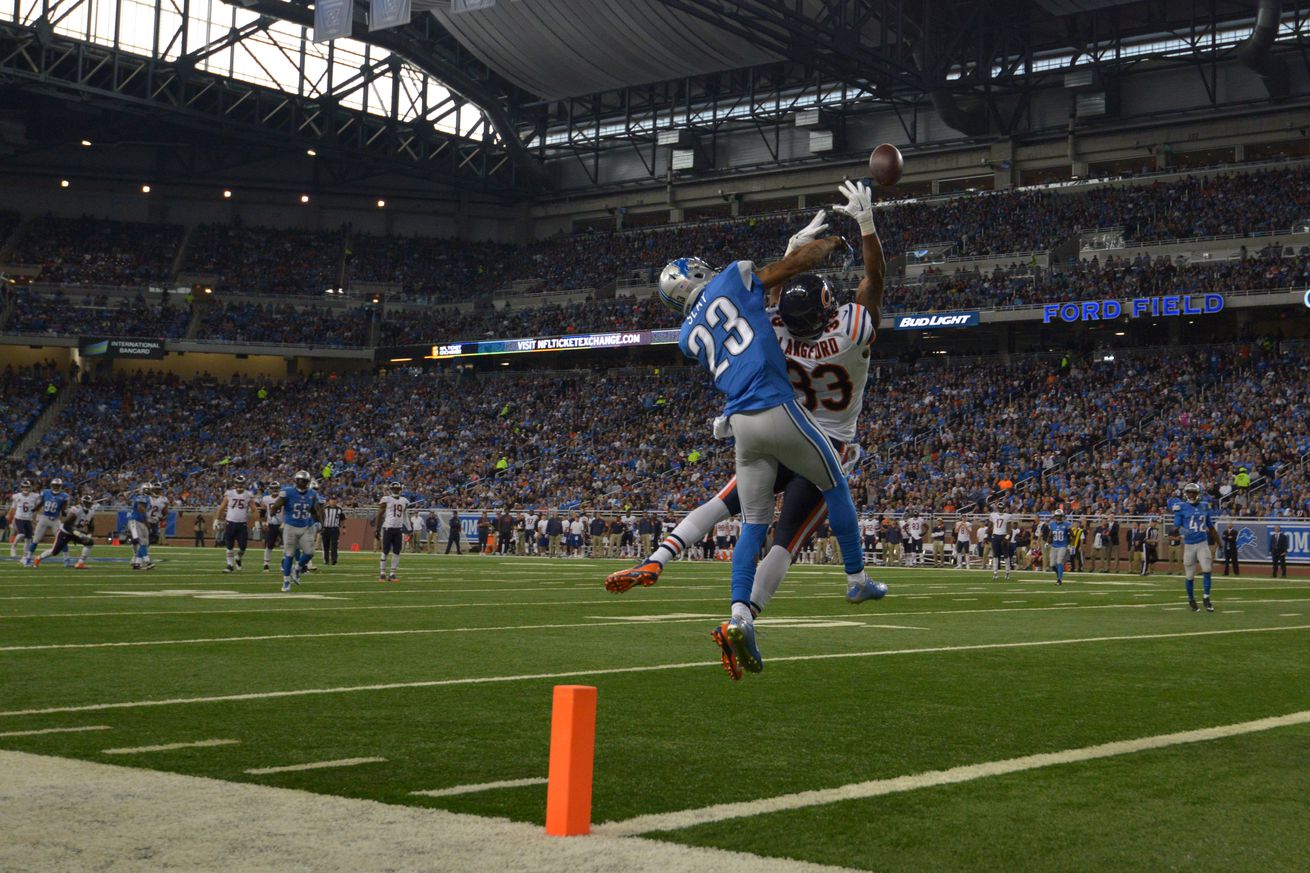 Check out our full week's worth of coverage for Lions vs. Bears.

The biggest blemish on the Detroit Lions’ 2016 resume remains their road loss to the Chicago Bears in Week 4. It was easily the Lions’ worst game played of the season and despite the final score, it wasn’t even that close. Matthew Stafford threw two of his five interceptions this year at Soldier Field and had a season-low 56.8 passer rating to go along with it.

Manton Rempville – 5
Exhibit B: Talking food and family w…
Metropolitan Museum’s Emperor’s Carpe…
8 Places to Drink Coffee in KC that …
Sometimes, it is all rainbows!

Since then, however, the two franchises have gone in opposite directions. The Lions have won seven of eight, while the Bears have won just two games since that early October matchup.

The Lions are two games ahead of the Packers and Vikings in the NFC North, so they cannot afford a slip-up against a Bears team that is out of contention. Is there a real chance the Bears could pull off the upset sweep of the Lions? Let’s take a closer look:

The Bears may have won last week, but they remain a mess. Jay Cutler is out for the year, as is QB Brian Hoyer, LB Danny Trevathan, WR Kevin White, CB Kyle Fuller, OG Hroniss Grasu, LB Lamarr Houston, OT Kyle Long, TE Zach Miller and DT Will Sutton. Alshon Jeffery and Jerrell Freeman are currently serving suspension. The Bears are trotting out Matt Barkley as their starting quarterback.

The Bears may have defeated the Lions back in October, but they are a shell of a team that they once were. The offensive line is way worse, the team is on their third-string quarterback, and the Bears are completely devoid of their primary receiving options.

Defensively, the Bears may still have some playmakers, but their secondary remains a big vulnerability. 30-year-old Tracy Porter leads a unit that is otherwise filled with young, mistake-prone talent.

Reasons the Lions should be pessimistic:

The Bears still sport a pretty impressive pass rush despite all of the injuries on that side of the ball. Willie Young and rookie Leonard Floyd have combined for 14.5 sacks this year. Floyd has been killing opposing quarterbacks recently, tallying 6.5 sacks in his past five games. Floyd only played in 30 percent of snaps against the Lions the first time around, but now he’s getting a starter’s amount of snaps (70-90 percent). The Lions will see a lot more of Floyd this week, and Stafford better be ready.

The Bears are also getting a lot of production from an offensive rookie this year. Running back Jordan Howard has emerged as a rare bright spot for this Chicago offense. Howard is averaging over 80 rushing yards per game at 4.9 yards per carry and is coming fresh off a three touchdown performance against the 49ers. He now ranks ninth in rushing yards and fifth in YPC. For reference, Ezekiel Elliott is also averaging 4.9 yards per carry.

You can look at the Bears a few ways. You could be worried about their young, rookie talent and see a team that is on the rise. Or you could see a team that is so desperately thin at talent that they’re forced to rely on young, unproven players. The reality is probably somewhere in the middle, but overall this is a bad team. Their offense is third-worst in points per game (17.0), while their defense is stuck somewhere between average and below average.

Still, Detroit needs to be careful. The Bears’ vaunted pass rush is the kind of x-factor that can change the scope of an entire game. The Lions’ offensive line has played fairly well, and Stafford’s quick-pass attack can render some of that moot, but if the Lions aren’t careful here, they could find themselves in another tough spot at the end of the game.

But in the end, the Lions offense should be enough to handle this defense. And on the other side of the ball, the Bears don’t present nearly enough of a challenge to take on this improving Lions defense. Detroit has no excuses; they need to win this game.