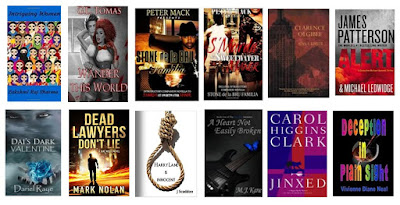 If you plan to take that long-awaited vacation or spend those hot days on the beach or in your air-conditioned abode, we have selected our favorite eclectic stories that will stimulate, entertain and leave you asking poignant questions. Just click on the title, read, enjoy and stay cool.

Marcus King Turns Neal Casal’s ‘No On…
Blackjack: What’s in a Name?
Top Back-To-School Preparation Tips &…
Florence in One Day: How to Plan the …
The Sign of Four
Intriguing Women by Lakshmi Raj Sharma - The author presents an authentic depiction of women from wide-ranging backgrounds from the , , and to , where cultural, ethnic, religious differences and one's economic and political standing can clash, and where marriage seems to define a person's status.
Wander This World by G. L. Tomas - A romance/love Story with a twist of mystery, suspense and murder. The backdrop is a university in , where Melanie Blue and Penley Green attend and are brought together to work on a class project but can't decide which subject matter to tackle.
Stone de la BRU Familia by Peter Mack - Set in , the reader is introduced to Stone Sweetwater, who is a puzzle to most as to how he really makes his money. Stone is determined to find the real culprit(s) who murdered his friend, Candi. But as the story moves on, Stone discovers that another friend of his, Misty, has also been murdered.
S'Murda at Sweetwater Manor by Peter Mack - This story continues where the introductory Stone de la BRU Familia leaves off. The setting is now Sweetwater Manor, a housing unit owned by Stone Sweetwater, who is no closer to finding the person responsible for killing his two friends and tenants, Candi and Misty.
Clarence Olgibee by Alan S. Kessler - In 1974, in a small town, Jimmy Tate Sullivan watches his two friends club to death an African American man. While serving time for the crime, Jimmy is approach by a sleazy inmate, named Munson, who uses him as a pawn to join a secret cult known as The Church of Christ, .
Alert by James Patterson & Michael Ledwidge - The backdrop is , where several attacks, blackouts, and the assassination of an official have left the city in disarray, weaving historical events with the present, and where nothing is what it appears to be.
Dai's Dark Valentine by Dariel Raye - An endless love story. The tale deals with obsession, erotica, revenge, desire, danger, jealousy, betrayal and murder, which makes the story even more suspenseful.
Dead Lawyers Don't Lie: A Jake Wolfe Novel by Mark Nolan - A photojournalist witnesses the killing of an arrogant attorney and a savvy lieutenant inspector who works with the San Francisco Police Department and his no-nonsense partner is assigned the case.
Harry Lane is Innocent by J Scaddon - A mentally challenged young man faces the biggest ordeal of his life: being accused of murdering a wealthy young female in a supposedly safe park.
A Heart Not Easily Broken (The Butterfly Memoirs Book 1) by M.J. Kane - Explores what people truly want in a prospective partner as to what they end up getting, the assumptions individuals make, based on color, when searching for a soul mate, and how holding on to internal and external barriers can prevent people from finding true love.
Jinxed by Carol Higgins Clark - A private investigator is hired to locate a missing woman who must attend a wedding in order to receive two million dollars.
Deception in Plain Sight by Vivienne Diane Neal - A wealthy naive woman falls for a handsome, charming and cunning man who will awaken her sexual inhibitions and set into motion a sinister plot that will leave her and her parents financially ruined.
****
If you enjoy reading fictional crime stories with a touch of lust, betrayal, scandal, deception, sex, fraud, revenge, and all that good stuff, which make for a page turning, plot twisting, and surprise ending that will have people saying, “I didn’t see that coming,” then visit our sites at
http://lulu.com/spotlight/hmcs1946
http://www.smashwords.com/profile/view/hmcs
http://www.amazon.com/-/e/B003ONO6G4
http://www.amazon.co.uk/-/e/B003ONO6G4


This post first appeared on One World Singles, please read the originial post: here
People also like
Marcus King Turns Neal Casal’s ‘No One Above You’ into Southern Soul Tour-De-Force
Blackjack: What’s in a Name?
Top Back-To-School Preparation Tips & Activities
Florence in One Day: How to Plan the Perfect Itinerary
The Sign of Four
Porta Via Calabasas