In ancient times, life was simple. Wake up, go hunt for food, eat food, retire to cave to sleep, repeat next day.  Nowadays it's much more complicated. Now you have to throw in doctor's appointments, driving kids to and from soccer games, wash dozens of loads of laundry, figure out whether that food you bought a week ago is still safe to eat, mow yard.  Well, you get the idea.

ఎవరిదీ పాపం.. నాలుగు రోజులు తిండి లేక…
Older adults (60plus) lockdown home w…
7 reasons I’m tired of being tired
The Correct Order for Your Skincare R…
الروتين اليومي للبشرة الصحية
Years ago I read this news article about how we're civilizing ourselves to death and we need to simplify our lives to make it better (and to survive without going crazy). 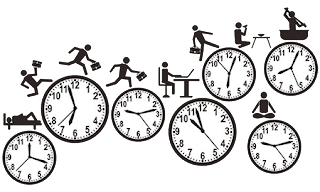 So I decided then that the way to simplify is to establish routines.   I became very good at building these routinesand have quite a few that I string together to navigate this modern world.  In many ways, it's similar to those ancient humans in that I'll get up, do my Routine, go to sleep and repeat the next day.

These routines are not regimented. In their words I don't tie a chore to a specific time (usually), but more likely have a general reference to when it should be done. So instead of saying I'll do it at 10 a.m., I instead just say I'll do it in the morning.

For example, my Sunday routine is to do most of the chores I don't want to do during the week. I can tell you with almost 90% accuracy that I did my laundry on Sunday 20 years ago. That's part of my Sunday routine and it hasn't wavered in decades. Likewise, I can assure you that 10 years ago I did my grocery shopping Sunday morning after eating breakfast.
Routine.

Now some people would say this is more of a rut.  Well, perhaps to a point.  However, there are certain caveats to my routines that allow me to not view them as monotonous but as ways to live a simple, happy life.

A big factor in my life has always been to be willing to do something on impulse.  So if my childhood friend Andrea said I should walk out on the ice to see what that thing was sticking out of it, well, I'd do it (and as you suspected fall through the ice).  Oh, yeah, it's led to some problems. 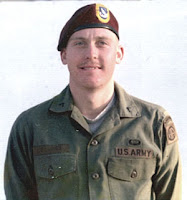 For example, when I was in the Army and punched out a window in the barracks to celebrate my birthday, yes, I paid a price.  However, I firmly believe that although mainly painful, a lot of these experiences were essential in how my life played out.  After all, one of my two theme songs for my life is Jim Croce's "Hard way every time."
So although I have specific routines that I use every day, I insist that if something comes up that would be fun, great, whatever, I'm willing to break from routine. In other words, if Pat Benatar(you read my blog about her, right?) showed up some Sunday morning and begged me to go spend the day with her, well, screw the laundry!

Okay, okay, here's an example of a daily routine.  On Sunday it's: eat breakfast and simultaneously read some newsletter/magazine; catch up on news on TV; promote books on computer; groceries; jog; outdoor chores; laundry; vacuum; write; decompress with a few beers and a video. Whew. 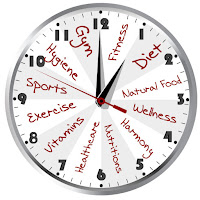 Another caveat is that routines may need to be adjusted.  For example, I retired as an academic advisor.  So I adjusted my routine of going to bed at 12:30 a.m. and getting up at 6:15 a.m.  Now I go to bed around 1 a.m. and get up…whenever.  Ahhhhh.
Oh yes, routines have had an effect on relationships, as you probably guessed. 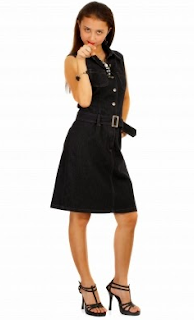 One women was absolutely livid that I did my laundry every Sunday. It didn't seem to matter to her that if she wanted to do something fun (like sex) I was willing to adjust.  She just went bonkers.
Another wasn't pleased that every Saturday morning I went to the gym to play basketball with my friends (back then, not now.  My knees resisted so I've adjusted).  I had been doing this for years, but I had only been with her for months.  You can guess which one I kept. 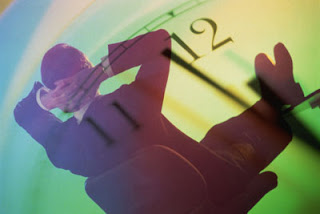 So as you can see, routines may be difficult to navigate with friends and family, but overall they’re pretty handy for simplifying your life. 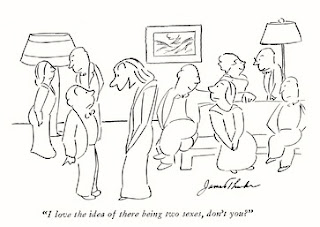 Sorry, I had to include my routine James Thurber cartoon.