Why do we have Easter Eggs at Easter? 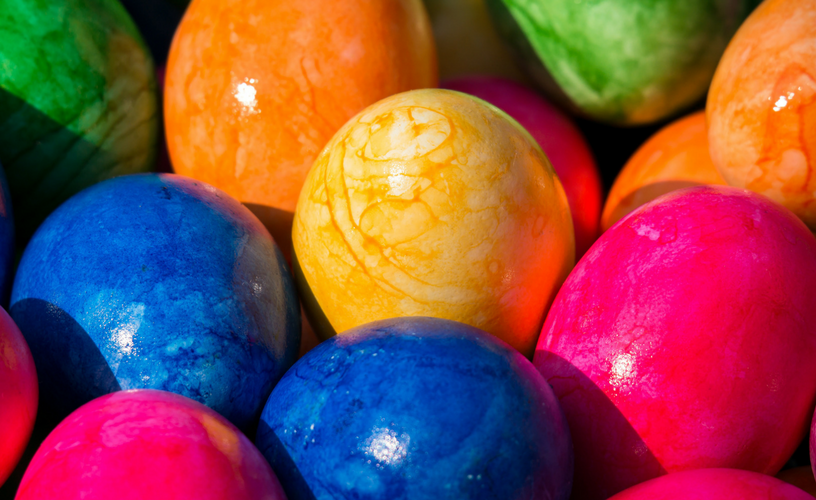 For millions of people, Easter is one of the most important dates in the Christian calendar as it signifies the death and resurrection of Jesus Christ. The symbols surrounding this event have all been incorporated into our understanding of what Easter is today- except rabbits. No one quite understands where they came from (we’ll talk about that later). Even Chocolate Easter Eggs are significant as they represent the tomb Jesus Christ was laid to rest in. There are a lot of questions surrounding Easter such as why do we have Easter Eggs or more importantly why do we have Chocolate Easter Eggs? And Why do we decorate Eggs? Hopefully we’ll be able to answer a few of them below. Easter is part of Christian festival that celebrates the resurrection of Jesus Christ. The Christian faith teaches that Christ died on the cross on Good Friday and came back to life three days later, on what became known as Easter Sunday. The symbol of Eggs in Christianity are meant to represent the tomb Christ was laid in to rest before he was resurrected. However, in other beliefs, Eggs are simply seen as a symbol of fertility which coincided with the Season of Spring as one of rebirth and renewal.

The term ‘Easter’ owes its origin to the Anglo-Saxon Goddess of Dawn – Eostre. The Goddess was associated with spring and fertility and was celebrated by pagans at the beginning of spring, in a month that became known as Eosturmonath. Although we now call it April, the associations surrounding the holiday remain the same. The name Dawn signifies the rebirth of a new day so Easter was associated with the rebirth of spring.

Why do we have Easter eggs?

In medieval times, eggs, milk and meat were banned by the church during Lent. This was to honour Christ who sacrificed his flesh on the day of crucifixion. Abstinence in Christianity was a form of penance and asceticism, which was the practice of self-denial to grow in holiness. Preserving food during Lent proved difficult as this was in pre-refrigeration days. However, unlike meat and dairy products, eggs did not perish quickly and were therefore the obvious choice for breaking the fast on Easter Sunday. Decorating and presenting eggs as gifts became a popular custom because of the surplus that would exist by Easter. Flesh meat banned by the church, during Lent included beef, pork, chicken and turkey. In former times meat was more expensive and therefore often associated with celebrations. Fish was not included in the flesh meat category and was how the tradition of eating fish on Good Friday began.

When was the first Chocolate Egg?

Chocolate Easter Eggs were first recorded in Europe in the early 19th Century. During this time hollow-shell moulds had not been invented and were made with dark chocolate rather than milk. The Chocolate Easter egg we know today owes it’s evolution to the machine created by the Dutch inventor Van Houten in 1828 which separated the cocoa butter from the cocoa bean and the cocoa paste created by the Cadbury Brothers in 1866. The Cadbury factory made cocoa butter readily available in large and small quantities. However, it was not until 1875 that Cadbury made their first Easter Eggs which was made with dark chocolate and filled with sugar drops. The first Easter Egg was made in 1873 by J.S Fry of Bristol, a company which would later merge with Cadbury in 1919. The tradition of filling eggs is still around today which is why you may find a pack of chocolate buttons hidden inside your egg. Decorating eggs soon followed and by 1893, the Cadbury Brothers had 19 different Easter designs.

The History behind Decorating Eggs 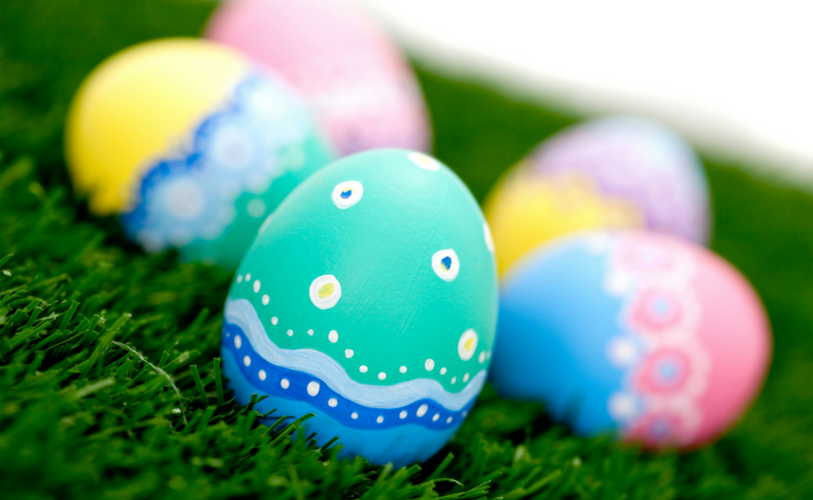 Over the centuries, different cultures have established their own traditions surrounding the practice of decorating eggs.

In 1885, Tsar Alexander III was one of the first to begin this tradition when he had one made for his wife, the Empress Marie of Russia. His goldsmith, Peter Carl Faberge, combined both tradition and ingenuity in his creation. The eggs outer shell was made with white enamel and opened to reveal a small golden egg inside, resembling an egg yolk. The smaller egg, in turn, contained an enamelled golden hen that held a jewelled replica of the Imperial Crown and a ruby egg pendant.

The Emperor was so impressed with Faberge’s creation that he bestowed the title ‘goldsmith by special appointment to the Imperial Crown’ and commissioned Peter Carl Faberge to create another for the following year. The Emperor gave the jeweller free reign over his designs. His only request was that they hid something inside. Both the pendant and the egg were lost during the revolution and are only known from a photograph.

The story of the Faberge firm is indistinguishably linked to the reign and tragic fate of the Romanov family. The firm is encased in history dating back to 1825 and remains a fascinating read for history fanatics. For more information visit https://www.faberge.com/the-world-of-faberge/timeline Developments in the Easter Egg Market Many of Richard Cadbury’s designs from the Cadbury Easter range were said to be inspired by French, Dutch and German designs. The Launch of Cadbury’s Dairy Milk Chocolate in 1905 provided an essential ingredient to the Easter Egg Market. The popularity of the chocolate increased sales in both chocolate bars and Easter Eggs and in time established the items as best sellers at Easter.

Now it is custom for chocolate eggs to be in-moulded with an Easter design, wrapped in the brightest foil, packed in a box and filled with chocolate. Easter has become not only the biggest event in the Christian calendar but also in households all over the country. The Easter Egg market is predominantly milk chocolate but the variety of flavours available is rapidly expanding. To start with, there’s mint flavoured chocolate, strawberry, honeycomb, vanilla, coffee, coconut, caramel, salted caramel, fruit and nut, orange, ginger, peanut butter and the list goes on.

Another important development in the Easter Egg Market revolves around the carton designer William T Horry who went on to revolutionise Easter Egg packaging. During the early 1950s, Chocolate Easter Eggs were very fragile and often wrapped in paper. William T Horry was working on light bulb packaging when he had the idea to use a similar design on fragile Easter Eggs. Cadbury was the first to implement the change on the Roses Easter Egg packaging. The carton provided space for branding and colourful designs paving the way to what we know today.

Today’s Easter Egg market is one of the most popular confectionery markets. A variety of new products and chocolate flavours attracts new consumers every year. The most popular chocolate egg worldwide, is the Cadbury’s Crème Egg which was first introduced in 1971. The Bourneville factory are said to make 1.5 million Crème Eggs every day. That’s over 500 million a year! Hollow Easter Eggs are still one of the most popular products. Every year, over 80 million chocolate eggs are sold. Impress your friends with facts and statistics about Easter from the Cadbury Brand Fact Sheet.

The origins of the Easter Bunny are shrouded in mystery. There are no references in the bible to a creature that delivers painted eggs to well-behaved children and yet the Easter Bunny has become a prominent Easter symbol. According to some sources a rabbit was the symbol for the goddess of Dawn, Eostre, who was celebrated at the beginning of spring. The rabbit traditionally symbolized fertility and new life because of high-reproduction rates.

According to http://www.history.com/topics/holidays/easter-symbols the Easter Bunny originated in Germany before surfacing in America in the seventeenth century.

“According to some sources, the Easter bunny first arrived in America in the 1700s with German immigrants who settled in Pennsylvania and transported their tradition of an egg-laying hare called “Osterhase” or “Oschter Haws.” Their children made nests in which this creature could lay its colored eggs. Eventually, the custom spread across the U.S. and the fabled rabbit’s Easter morning deliveries expanded to include chocolate and other types of candy and gifts, while decorated baskets replaced nests. Additionally, children often left out carrots for the bunny in case he got hungry from all his hopping.”

Whatever your beliefs, Easter is something every family can celebrate. Either by running around the garden searching for eggs, attending a church ceremony or gorging on chocolate eggs. Easter gives us the opportunity to stop and be grateful for what’s important in our lives. The concept of Easter may be shrouded in history and tradition but it’s our interpretation of the event that makes it special. It’s the fond childhood memories we look back on and the traditions we continue in adulthood.

We have a wide variety of Easter products available, ranging from Chocolate Easter Eggs to Easter Sweets and Biscuits. Our Easter range includes Chocolate Easter Eggs, Easter Sweet Hampers, Mini Easter Eggs, Easter Chocolates and Easter novelties including Easter Bunny Bugs and Easter Chick Bugs. It’s best to get your order in to guarantee delivery. Take a look at our collection at “www.redbows.co.uk/branded-easter-products”: www.redbows.co.uk/branded-easter-products

Have a great Easter!

Why do we have Easter Eggs at Easter?