The second day of my vacation began with breakfast at the hotel. Then I went to the Walgreens on State Street at 8:56 a.m. and bought a little notebook, a set of scissors, and blister band-aids. I needed a little notebook to write directions on scraps of paper because I forgot to print out my directions. I didn’t want to rely on my smartphone having power to view my directions. I forgot that I needed scissors to cut the extra shoe inserts I brought. And I needed blister band-aids because I thought I was developing a blister on my left foot, but fortunately it didn’t develop into a problem.

A Guide To Visiting Antigua, Guatemal…
The Friday Roundup – Creating and Opt…
Why PPE Is Crucial for Health and Saf…
The Best Romantic Honeymoon Destinati…
Police Arrest Man After He Allegedly … 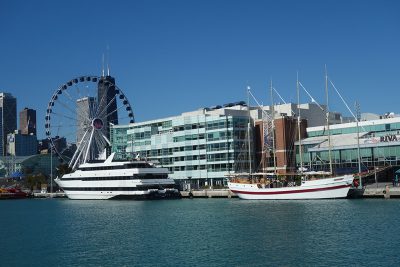 At noon I went on the  Shoreline Sightseeing Classic Lake Tour for $25.76. The boat took us out into Lake Michigan where we got closer to the iconic Chicago Harbor Lighthouse. Chicago is sometimes called a Third Coast city because it is built on the shoreline of a great body of water. Lake Michigan does look a bit like the ocean with water stretching past the horizon. It was a bright, sunny day so I took lots of photos.

Although the Navy Pier took care of my morning, I still had to find things to do that afternoon. I decided to visit the Museum of Contemporary Photography next since it would be open. I walked back west to the Grand Station and took the Red Line subway towards Dan Ryan to the Harrison Station. I forgot to mention that this was my first use of the subway since I didn’t want to face too many challenges on my first day. I already had a Ventra Card which I ordered online. I had a 7-day pass on my Ventra Card. This was a contactless card that did not need to be swiped at a turnstile. You only had to wave it over the card reader. I liked this system better than NYC’s MTA cards.

The Museum of Contemporary Photography had three floors of galleries. There was no charge for admission. I saw a few nude photos by Alexandre Haefeli. And I saw photos from Barbara Davatz’s series “As Time Goes By” which were black and white full body photos of various people over the years including their punk phase. There was a room elaborately decorated as some sort of art installation or environment. The second floor mostly had photos of transgender people by Lorenzo Triburgo. The top floor had a very few photos by Laurence Rasti taken in Iran. That is the best I can do to identify what I saw there. Here is the description of the exhibition:

Disruptive Perspectives is an exhibition that explores gender, sexuality, and identity. The artists included use photography to articulate an expansive range of identities that cannot be sufficiently characterized using simplistic binaries. Rather than rendering identity as fixed, the works on view consider gender and sexuality as negotiations that are shaped by the human psyche, the passage of time, and the complex relationship between self and other. 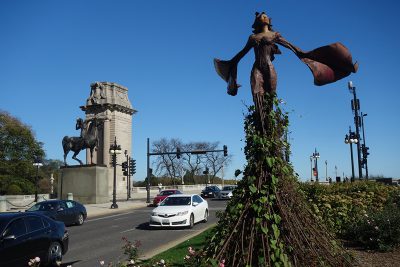 After leaving the photography museum I took some photos of sculptures in Grant Park because I could see them across the street. In particular I was drawn to the Daphne sculpture. Daphne was a Greek mythological figure who was transformed into a plant or tree so that she wouldn’t be captured. After braving the traffic to get close enough to take a good photo of Daphne, I went back to the Harrison Station and took the Red Line subway up to the Monroe Station which was closest to my hotel. I went to Macy’s to find Barbara’s Bookstore on the lower level where I bought the book, The Dollhouse by Fiona Davis. This book is about the Barbizon Hotel in New York City where Sylvia Plath stayed during her Mademoiselle editorship. The food court was right next to the book store so I ordered a Chicago Dog, fries, and a coke from Signature Kitchen. I was impressed by how many stores were located in the Loop and along the Magnificent Mile. These were major shopping strips with many high-end stores selling luxury goods. There were huge department stores, malls, and exclusive clothing stores everywhere. 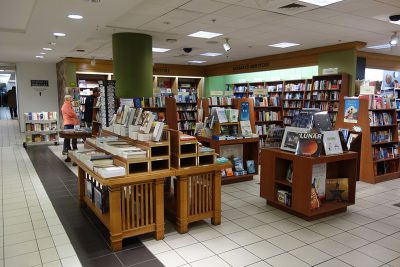 I still had some time to kill that evening so I went to the Willis Tower Skydeck. It took over an hour to get to the 103rd floor. I had not planned on seeing this attraction so I did not buy a ticket online at home like I did for most other attractions. Security required all electronics to be placed in your coat to go through the scanner. There was the  usual photo shoot to sell you overpriced photos later. I always try to avoid that and I never buy the photos. They really packed us into the elevators. I did feel the pressure change as the elevator went up. The Skydeck was super crowded and I couldn’t even get to the Ledge. The entire experience was rather miserable but I had nothing better to do. 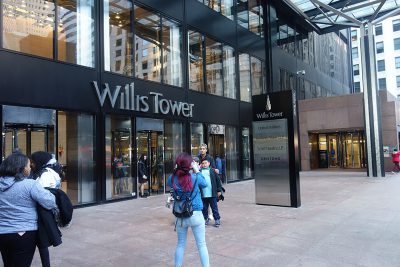 I accidentally crossed the south branch of the Chicago River on my mission to find the  Civic Opera Building. I did find Union Station though. Eventually I located the Civic Opera Building which I wanted to see because opera is one of the performing arts, not that I’m into opera. I then took more photos of the Chicago River and skyscrapers in the evening because the buildings are fantastic when lit up at night. I took some photos of the Goodman Theater at night with its sign lit. And I took some photos of Marc Chagall’s Four Seasons at night because it looked kind of eerie and deserted.

This post first appeared on Williamsport Web Developer Weblog | Brief Notes On, please read the originial post: here
People also like
A Guide To Visiting Antigua, Guatemala: The Best 5 Things To Do And See
The Friday Roundup – Creating and Optimizing GIFs Plus D.I.Y. Reflectors
Why PPE Is Crucial for Health and Safety in the Workplace
The Best Romantic Honeymoon Destinations in the United States
Police Arrest Man After He Allegedly Buried His Mother And Sister In The Backyard And Continued To Cash Social Security Checks
20 Deep-Rooted Beard Myths Busted Once and For All
How technology is giving beauty industry a makeover