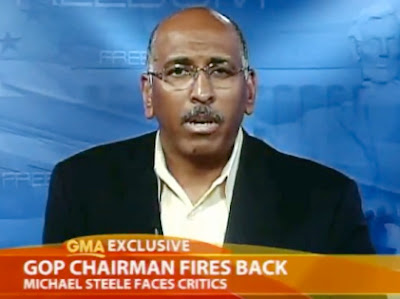 It was the smartest, most astute, least ideologically-driven thing that Michael Steele’s said in a long time, and he caught hell for it almost immediately.

The “it” was his response to a question from a commentator on one of the morning TV gabfests — a response that laid his heart vis-à-vis the matter of racial equality in the United States, tolerance, patience and whether it’s possible for the storied playing field to ever be level.

Steele, the chairman of the Republican National Committee, has been under fire from many analysts and observers (including this one) for his role in contributing to the fiscally licentious management culture that led to the RNC’s West Hollywood spending scandal, and the resulting fallout. He was interviewed Monday by George Stephanopoulos on ABC’s “Good Morning America.”

STEPHANOPOULOS: We've got a lot of questions on my blog for you this morning.

STEPHANOPOULOS: One came in from Myron. And he asked, "Do you feel that, as an African-American, you have a slimmer margin for error than another chairman would?"

STEELE: The honest answer is yes.

STEPHANOPOULOS: Why is that?

STEELE: It just is. Barack Obama has a slimmer margin. We — A lot of folks do. It's a different role for, you know, for me to play and others to play. And that's just the reality of it.

The pushback was immediate, aggressive and (a departure for modern Washington) totally bipartisan. Ken Blackwell, the former Ohio secretary of state and the vice RNC chairman, jumped on Steele with all fours. “To interject race here is nonsense. There is a pattern of missteps, miscues and misstatements. And as a consequence, we now can’t fall back on the issue of race.”

Blackwell’s response probably obscured some of the deeper issues on race that the Republicans have. What no doubt truly raised the ire of the Republicans over Steele’s comments had much to do with equating himself with Obama on this issue. That’s what got the GOP in an uproar. 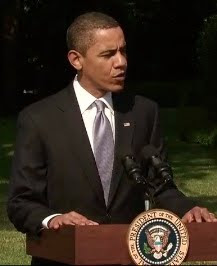 “Barack Obama has a slimmer margin. … A lot of folks do.” With two brief sentences, Steele brought down part of the GOP’s carefully constructed barrier of political distinctions. By existentially aligning himself with Obama, Steele undercut his party’s effort to maintain the philosophical firewall, the us vs. them, that’s central to contemporary Republican identity. Finding common cause with “the enemy” on the nation’s enduring third-rail issue blurs the battle lines, creates the rationale for carving out a commonality the Republicans want nothing to do with. That’s one of the reasons why Blackwell hit back so hard.

And for the Obama White House, and for Democrats generally, Steele’s reply to 'Myron' was problematic because it reawakened debate over a crucial aspect of the racial divide, reanimated an intrinsically corrosive but utterly necessary narrative that the Democrats have invested much time and political capital in trying to put to rest (witness the quixotic "postracial" meme that no one who's serious about this country takes seriously).

Steele’s honest answer, of course, is the right one. There’s always been a different threshold, a different mathematics of performance that black Americans have been subject to. The saying about “working twice as hard to get about as much” has long standing in black and minority America. It distills many of the interracial and inter-ethnic disparities in the national life, from educational achievement scores to advancement in the workplace, from unemployment statistics to life expectancies.

In a perfect world, or a less partisan one, the fact that Steele understands this would be cause for celebration. As it is, it’s another indicator of the current reflexive ruthlessness of our politics. Steele’s comments reflect a grasp of that division; ironically, the reactions to what he said don’t conceal that division so much as they reveal it for what it is.

The fact that Steele drew fire from both sides of the aisle for his honest answer to an important question indicates the common ground the Democrats and Republicans already share:

Whether it occurs within a Republican Party allergic to broadening its appeal to black and minority voters, or from inside a Democratic administration determined to take the high road on race matters by avoiding the road altogether whenever possible ... denial is an equal opportunity experience.
Image credit: Steele top: Good Morning America/ABC News. President Obama: Still from White House video, August 2009.