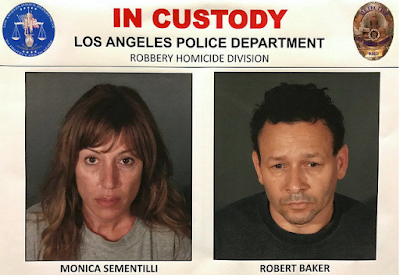 The 9th Floor
I arrive on the 9th floor around 8:19 am and I'm already tired. I haven't been sleeping well of late and the nearly 2 hours of travel time to get to court is not easy on this antique body.

About a minute later, most of Sementilli's defense team arrives. Blair Berk along with the gray-haired gentleman and the dark haired data/computer expert. Also with them this time is Sementilli's sister as well as an older woman with very short dark brown hair. Sementill's blond-haired sister is wearing a white blouse and a black sweater-jacket. Leonard Levine was absent.

Right after the Sementilli defense team arrives, Baker's counsel, Michael Simmrin arrives.  As soon as Simmrin arrives, I overhear snatches of conversation between defense counsel about when to schedule the next pretrial hearing.

What looks like a Deputy DA and a young, pretty blond intern (she's wearing the standard blue badge I've come to recognize as what interns wear) arrive and greet Simmrin. This other attorney tells Simmrin he has a case in front of Judge Coen.

8:35 AM
Department 101 opens and I follow the defense team inside Judge Coen's court. There is a male clerk at the clerk's desk. Like I've seen many times before, Judge Coen is at his clerk's desk chatting with the gray-haired man. Judge Coen is wearing a white shirt with a shimmering, baby blue tie. Sementilli's sister and older friend sit in the second bench row. The defense data expert takes a seat in the well of the court. When the gray-haired man is finished chatting with Judge Coen, he sits directly to my left in the second bench row. When he first entered the court, he placed his worn satchel he always carries in the spot he likes to sit, on the aisle, second bench.

A very attractive black woman with perfect make-up, small gold earrings and long tiny braids had entered earlier. She has taken a seat in the well of the court. I'm a bit mesmerized by all those tiny perfectly braided braids.

8:37 AM
DDA's Beth Silverman and Melissa Opper arrive. DDA Silverman is wearing a blended thread black/gray pant suit with a black top. She accented it with a nice silver necklace. She hands Simmrin a document with a folder and says, "Here's your copy." Over at the clerk's desk, DDA Opperman returns back to the court, the original SDT's they previously received.

Another male Deputy DA arrives and sits in the first row.

Judge Coen is on the bench in his robes. The defendants are inside the courtroom yet. They are not on the record yet. It appears Judge Coen is waiting. Then I notice that the court reporter is not at her desk yet.

8:45 AM
The court reporter comes out quickly with her equipment and Judge Coen asks her, "Are we ready?" She replies to the court that she is. We are waiting for the bailiffs to bring the defendant's out. Mr. Simmrin works on his laptop. Judge Coen patiently waits. A second bailiff enters. He goes to the custody door, opens it and holds it open.  Defendant Baker enters first. He still has short black hair. No noticeable beard but a slim mustache.  He's in the usual orange jumpsuit and white long-john type undershirt beneath that.

Soon after Sementilli comes out. She is in an orange jumpsuit also this time. I don't know when the change happened since I missed the last hearing but this is the first time I've seen her in the higher-security orange jumpsuit. Sementilli's hair is long and all dark.

Judge Coen goes on the record. He indicates there are no motions before the court. Blair Berk addresses the court first. She tells the court that they are anticipating a new round of discovery and that they are still working through the last two rounds turned over by the prosecution.

And that's it. The people inform the court that several SDT's that have been copied and returned to the court.

Next hearing is July 16th.