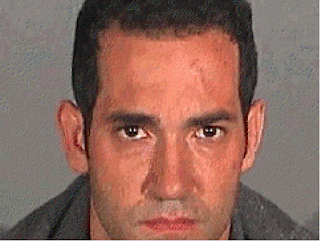 I arrive on the 9th floor of the Clara Shortridge-Foltz Courthouse in downtown Los Angeles about 8:50 am. I head directly into Judge Larry Paul Fidler's courtroom, Dept. 106.

DDA Daniel Akemon and DDA Garrett Dameron are standing in the well having a conversation beside the prosecution's table. The defense team (Dale Rubin and Daniel Nardoni) are in the custody area with the defendant.

In the back row of the gallery near the door is defense criminal investigator Chris Nicely. Chris looks just as handsome as the last time I saw him. We exchange greetings.

Also in the back row of the gallery is CBS 48 Hours Producer Greg Fisher. Right beside him is a pretty petite woman. Fisher informs me that Gargiulo is going to amend his plea to add not guilty by reason of insanity. This is a shocking development. This move could potentially derail the trial from being the next case up on Fidler's calendar.

At the last pretrial hearing, it was understood by both parties that as of today, the trial date was set at zero to sixty. Additionally, all motions and responses were to be filed by today and argued on February 2. The trial would then be scheduled soon after. All of that is now potentially out the window.

The woman beside Greg introduces herself. She is Tori Edgar from NBC Dateline.


At some point, People Magazine reporter Christine Pelisek arrives and she gets introduced to Tori. Apparently, both Tori and Greg have been covering a case in Riverside County for their respective networks.

9:10 AM
Dale Rubin comes out from the custody area. He immediately goes over to speak to DDA Akemon. Afterwards, Nicely gets up from his seat and goes up to the well gate to speak to Rubin.  DDA Akemon exits the courtroom for a moment and then comes back in.

9:12 AM
Daniel Nardoni comes out from the custody area.  Gargiulo is brought out less than a minute later. He is much the same as I last saw him. He is wearing the usual orange jumpsuit with the white long-johns type shirt underneath. His head is completely bald. His face is clean shaven save for a mustache and eyebrows. Understand, Gargiulo looks nothing like his booking photos, which are almost 10 years old now. He looks a bit leaner in the face.

Nardoni and Rubin both lean in to chat with Gargiulo.

9:15 AM
Judge Fidler takes the bench and they go on the record.

The defendant wishes to amend his plea. He is adding not guilty by reason of insanity. The court has to appoint two psychiatrists. The plea amendment is not for whether Gargiulo is competent to stand trial.

Judge Filder states that 1027 requires the appointment of psychiatrists. The defense tells the court that they already have two doctors appointed that have been examining their client for the past year. At first, this shocks me because I wonder if the defense has been planing this all along. But in reflection of past death penalty cases I've covered, it's not necessarily surprising. Defense counsel can use psychiatrists for mitigation in the penalty phase. Not positive, but I believe the defense can call the doctors to present mitigation evidence.

The case will be held over to February 2nd, and the case calendar set at zero of sixty as of that date. By that time, the DA will have viewed the doctor's reports and they can have the court appoint doctor's for the prosecution.  Rubin informs the court that February 2 was reserved for arguing motions. They would like to take that off the table for that date.

The DA's office have already informed the victim's families and is now informing the court that the families may wish to appear on February 2nd to address the court under Marcy's Law. (It is unknown at this time if any of the family members will show up and make statements to the court.)

The DA is ready to take the plea now. Because of the type of plea, what follows is a series of questions that the DA is required to ask the defendant as well as some questions to his counsel. These questions are very specific. They ask questions such as,

The new plea means there could be a two step trial in this case. If Gargiulo is convicted on any of the charges, a second trial will take place to determine if he was legally sane (at the time of the murders). Only if Gargiulo is found guilty will there be this second trial.

The DA asks Gargiulo question after question after question to make sure he understands what will happen with this additional plea and the consequences. Conversations he previously had with his psychiatrists under his prior plea were privileged. With this new plea, the DA's office now gets to see all the session notes from those visits and any reports the doctor's have written.

DDA Akemon: "Do you understand all your constitutional rights?"
Gargiulo: "Yes."

If there is a sanity phase trial after the guilt phase, the DA's office doesn't have to prove anything. The defense must convince (a jury) at that trial Gargiulo was insane at the time he committed his crimes. If Gargiulo is found not guilty by reason of insanity, he could be committed to a psychiatric facility for at least 180 days or longer.

DDA Akemon tells the defendant, "If found not guilty (by reason of insanity) you could spend more time in a state hospital than required by law."  Gargiulo's responses to all of DDA Akemon's questions are that he understands.  DDA Akemon asks, "Do you have any questions ... that I've asked you about today?" Gargiulo responds, "No."

DDA Akemon continues to read questions to Gargiulo from his script. There are questions for defense counsel. I believe the defense counsel states they don't have anything further to add. Defense waives the reading of the arraignment.

Judge Fidler addresses Gargiulo. He asks him if he understands that if he is found sane, he would then face a penalty trial where he could face the death penalty.

DDA Akemon tells the court there have been two psychiatrists, possibly three that have been appointed to Gargiulo in the past, previously under 1369.

Gargiulo must now waive his privilege in regards to those prior doctor visits. DDA Akemon lists them for the court: Dr. Budding, Dr. Vianne Castellanos and Dr. Robert Freundlich. Under 730 and 1017, previously those visits were protected.

Either the court or DDA Akemon asks Gargiulo, "Do you understand that those statements are no longer protected? ... Do you waive (your rights) under the fifth amendment, in regards to those exams?" Gargiulo answers, "Yes." Judge Filder rules, "The court finds the waivers have been given."

And that's it. There's nothing else. The deputies start to take Gargiulo back into custody but the court calls out to the deputies to bring him back. They are still on the record.

And that's it. Next hearing February 2nd.

Here's what happens now. Every time Gargiulo spoke to a psychiatrist while he has been in custody since July 2008, the people get to see that doctor's notes and any report that was produced.

Let's say hypothetically, during one of those interviews, Gargiulo admits to that doctor that he committed the crimes he's charged with. The people do not get to use any of that information during the guilt phase of the trial, unless, Gargiulo's defense team uses it as part of their defense during the guilt phase. At that point, the people could then use the information, put on a rebuttal case and call their own witnesses.