There’s only one U.S. President at a time - Obama tells Trump 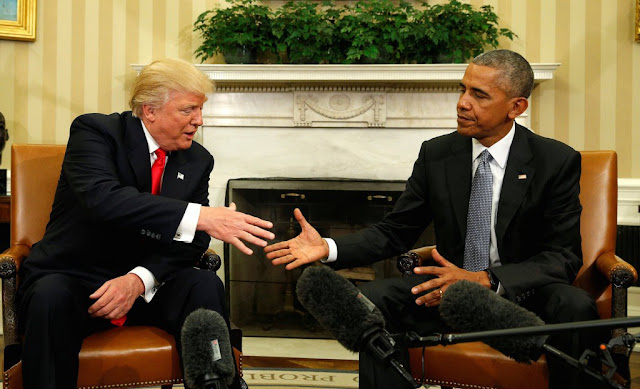 Outgoing U.S. President Barack Obama has told incoming President Donald Trump to accept the fact that there is only one U.S. President at a time.
Mr. Obama also told the president-elect that he remains the U.S. President till Jan. 20, 2017, when he would complete his two-term presidency of the U.S. and handover to Mr. Trump.
The News Agency of Nigeria reports that Mr. Obama’s remarks followed what the White House termed as Trump’s undue interference in U.S. policies since his election.
The president-elect had on Thursday directed the U.S. Ambassador to the UN, Samantha Power, to veto the Security Council’s Resolution on Israeli settlements in Palestinian territory.
However, the Obama administration disregarded Mr. Trump’s directive and had gone ahead to abstain from voting on the resolution when it finally came up on Friday, drawing criticisms from the president-elect and his team.
The White House, in a response by Mr. Obama’s Deputy National Security Advisor for Strategic Communications, Ben Rhodes, obtained by NAN, said the UN Security Council’s Resolution was a policy issue that Trump should not meddle in.
“On the President-elect, the first thing I’d just say is that there’s one President at a time.
“President Obama is the President of the United States until January 20th, and we are taking this action (abstention), of course, as U.S. policy,” he said.
Mr. Rhodes explained that there was no communication between the White House and the President-elect or his staff between when Obama made his decision and when the vote took place.
“So I’m not aware that President Obama and the President-elect spoke about this, but again, I’m not — President Obama definitely made no reference to that, so I can’t confirm that this hasn’t come up at all, but I’m not aware of any particular conversation they had about this.
“We did hear from the President-elect’s team. Again, our position has been there’s one President at a time.
“We’re going to make our decision on this and, frankly, believe that it’s important that there’s a principle here that the world understands who is speaking on behalf of the United States until January 20th and who is speaking on behalf of the United States after January 20th.
“And look, the new team will have every opportunity after January 20th to pursue their own policies, to take different approaches.
“I’m certain that they will on any number of issues.
“We’re just reflecting the simple principle that I think has guided the President-elect transitions historically.
“Which is that there is one President at a time and we’re going to execute our duties until the new team is in place and the new President is inaugurated,” the Obama aide said.
NAN recalls that following the pressure that Trump reportedly put on Egypt, the sponsor of the resolution, Egypt withdrew it on Thursday and the vote was consequently delayed till Friday.
However, the resolution was put forward on Friday by Malaysia, New Zealand, Senegal and Venezuela and the 15-member Council adopted the resolution by a vote of 14 in favour and one abstention – the U.S., which abstained from voting rather than veto the resolution.
(NAN)

There’s only one U.S. President at a time - Obama tells Trump