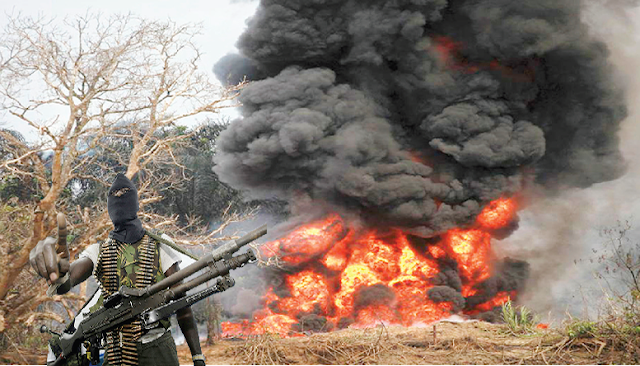 Forty-Eight hours after the Niger Delta Avengers (NDA) gave reasons for breaching the treaty between President Muhammadu Buhari and the Pan-Niger Delta Forum (PANDEF), the militant group struck again yesterday by blowing up three truck lines at Nembe in Bayelsa State. The group said its Elite Strike Team 03 struck Nembe 1, 2 and 3 truck lines, being operated by Agip, Oando and Shell respectively at about11.45p.m.

USDA Announces $400 Million in Fundin…
Xiaomi Opens its First Authorized Sto…
Carney Chukwuemeka Profile, Biograph…
Schumer, Booker, Wyden File First Fed…
2023: ADC’s Kachikwu to unveil runnin…
The trunk lines have the capacity to supply 300,000 barrels of crude per day to Bonny export terminal. The spokesperson of the Avengers, Brig. Mudoch Agbinibo, who explained why they broke the ceasefire truce and claimed responsibility for the bombing, said it was to prove the Nigerian Navy’s “Operations Sharkbite” wrong.
“This is in response to the so-called “Operations Sharkbite,” an act of terrorism commissioned by the tyranny of the Nigerian Navy establishment and orchestrated by some elements of the ruling political class to continuously undermine any effort by the Nigerian state to address the legitimate demands of the people of the Niger Delta as well as a conspiracy to bloat the accounts of some security contractors and conflict merchants within the party structure of the APC.
“We are only reiterating our strong resolve that time is running against the Nigerian government, that there is doom ahead.
The Nigerian government needs our cooperation more than we need the government as it concerns the extraction of crude oil and hydrocarbon resources in our God-given land,” the group said.
The militia group maintained that bombing of oil installations would continue until the Federal Government engaged them in a sincere negotiation, stressing that until the burning issues of resources control, fiscal federalism and inclusive development are addressed, “no force will stop this struggle even with bare hands.