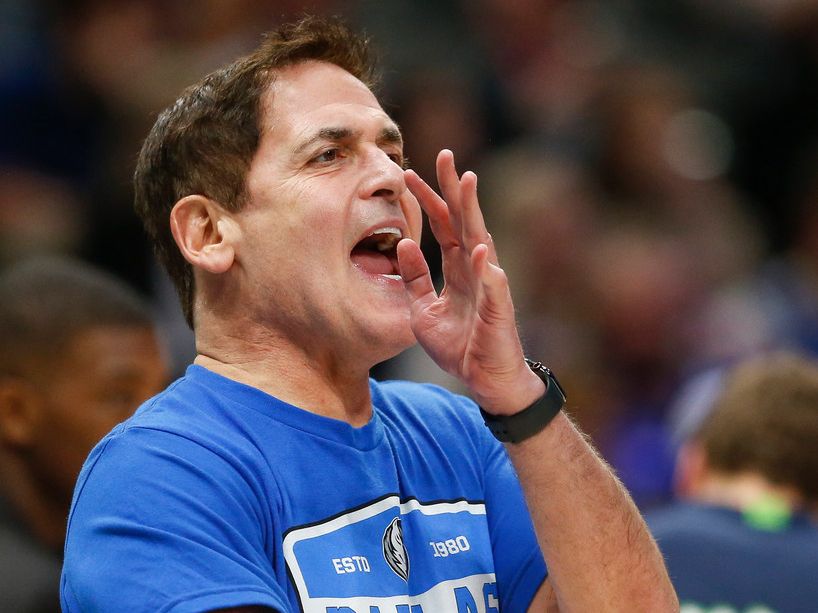 On Monday, I blogged about how I thought Dallas Mavericks owner Mark Cuban, to maximize the potential of Luka Doncic and keep him happy, probably needed to fire head coach Rick Carlisle.

Little did I know then that Carlisle might only be No. 2 on the list of people Cuban needed to fire.

Per the Athletic, and a Dallas Snooze story with the Cuban Sandwich's denial reaction, his analytics guy Haralabos Voulgaris, a former professional gambler, has pissed off Luka over the past year at least as much, and likely far more, than Carlisle, and maybe pissed off Carlisle as well.

Kestrel Lodge campsite
John expresses his wish to build Cuba…
A summarily list of 32 Things I Wishe…
CUBA - Trump Diplomacy, Cuba
The deals the 'Shark Tank' sharks reg…
(From previous posts, there's signs the "Franchise" has friction, and probably increasing friction, with Carlisle. This Red Satan piece by Tim MacMahon, formerly of the Dallas Snooze and knowing the Mavs, has details.) 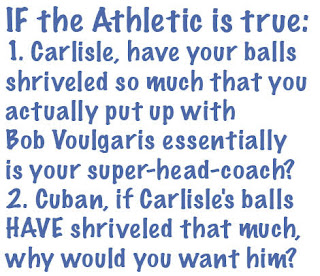 First, why does Cuban have a former pro gambler in this role? Surely he could have hired someone both better, and with less of an "optics" problem, than Voulgaris. (Well, maybe the NBA doesn't have a problem; see below.) I mean, Cuban was touted nearly a decade ago for being the polar opposite of Phil Jackson and being at the front of the analytics movement. Why does he have Bob Voulgaris doing this? Payback? Blackmail?
Second, on surrounding the franchise with a better supporting cast, supposedly, Voulgaris has been a draft whisperer to both Cuban and Donnie Nelson. Wunderbar. And more. Much more.
CBS has a piece with more quotes from the Athletic than the Snooze does. This is the nutgraf:

Multiple league and team sources tell The Athletic that Voulgaris has been the most influential voice within the Mavericks front office since joining the team, either initiating or approving virtually every transaction made over the past two seasons. Those same sources add that Voulgaris has frequently gone as far as scripting the starting lineups and rotations for longtime head coach Rick Carlisle.

So, even beyond his analytics work? Why does he have Bob Voulgaris, a dweeb with that nerdy Twitter profile pic, doing this? Payback? Blackmail?
Aside from Jalen Brunson, solid and serviceable at his slot, the Mavs have basically sucked about as much over the last couple of years as before.
But, back to point 1. Surely someone in those "multiple league sources" is close enough to Adam Silver that Silver knows the background on Voulgaris and to me, THAT doesn't look good.
Then, there's the matter of free agency.
Most names on this free agent list likely aren't happening. And, that sets aside fans wondering how well Cuban and Donnie Nelson are as free agent whisperers. (Frankly, they still strike me as being used as rich stalking horses by agents and little more.) It also now raises issues of how much Voulgaris is involved with that.
Or with trade recommendations. As in the not-so-unicornish Kristaps Porzingis. And, yes, he put his imprimatur on that one, too.
For the man who has said he'd put Luka ahead of his wife, putting not one but two rectal irritants in front of Luka is puzzling indeed.
Maybe it's cheapness, in that a bigger-name new coach might want more money. Ditto for a better, and less tainted, analyitics guy than Voulgaris.
Now, Luka's already said he'll sign the full-level extension he's entitled to.
BUT —
This is a players' league, more than the NFL or MLB. Tom Brady is the rare player who moves on, on his own, and that was only because he insisted that the Patriots couldn't franchise-tag him as part of his last contract pre-Tampa. And, even then, he couldn't get Belichick fired. NO player does that by himself in the NFL.
The NBA? Ever since Magic Johnson got Paul Westhead fired, a year-plus removed from an NBA title, different storye. Especially on free agency. LeBron James wouldn't have finalized The Decision to be Miami if Pat Riley ain't there. The best coaches and GMs know that, too. And, the best players know they know that.
Back to the Mavs.
I said above that the team seems to me to have been used as a stalking horse for leverage by potential free agents. You know, like Albert Pujols allegedly did to the Marlins long ago.
The idea that they'd be taken seriously when they employ TWO people that piss off the franchise? Laughable.
I had suggested, among B-tier free agents, a Will Barton or Paul Millsap since a full season of Aaron Gordon with the Nuggets means one or both of them are expendable. (Barton has a player option.) But would either of them consider the Mavs their first option?
In addition, ESPN points out what many Mavs fans know. His injury history has cut his mobility and
As for coaching?
Beside pissing off Luka, is Rick Carlisle, 2011 ring aside, is the best man to be leading the Mavs in the future. Let's ask it more.
At ESPN, Bobby Marks was handing out receipts on Twitter:

Dallas have been to the playoffs 9 times with Rick Carlisle as Head Coach.

6 first rd. exits in a row since winning a championship in 2011.

That's why people like me are questioning.
Sadly, the Cuban sandwich has already said "he stays."
And, he's wrong. The Hawks, dead in the water a few months ago, replaced Lloyd Pierce with Nate McMillan midseason — and they're not only in the playoffs, they're still playing.
Again, why not look at Jason Kidd?
Plenty of Mavs ties. Skill set that might bring new things out of Luka. Could do worse, like staying with Carlisle.
I know luck is a large part of why he's a billionaire, but it amazes me how much stagnancy Cuban allows with his team. It IS a business, after all, and the business is winning.
One final question, a rhetorical one. Actually, no, it's two.
IF the Athletic story is true:
1. Carlisle, have your balls shriveled so much that you actually put up with Bob Voulgaris essentially being your super-head-coach?
2. Cuban, if Carlisle's balls HAVE shriveled that much, why would you want him?
There is no god and I am his prophet. - SocraticGadfly