Tulsi, Yang, the Yang Gang, and versions of BI 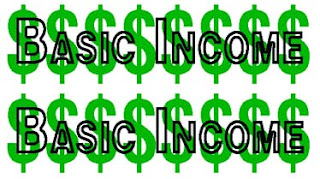 Tulsi Gabbard, despite, as far as I remember, never before talking up Basic Income (a Googling claims she has supported it), has all of a sudden made it a key talking point, along with an explicit pitch to the Yang Gang.

There's also the issue of what version of BI Gabbard supports — the lefty or the libertarian conservative version. PplsWar, who is "interesting" a absolute dickhead on Twitter, says it's the latter. I'm on record as strongly against that version, and against BI "guru" Scott Santens' version of it. Santens does a call-out of him. That said, per Politico, and contra what a Yang staffer told me on Twitter, it seems Yang himself supports at least a semi-libertarian version. It's clear, with a quote from his website, that he wants BI to replace at least not only "welfare," but things like disability income.

So, despite Santens' callout, I'm venturing Gabbard does support at least a semi-libertarian version. It seems she and Yang both probably are trying to have their cake and eat it too on BI — a "new idea" but one that doesn't fit into pre-neoliberal New Deal, or more, Great Society, boxes.

If that's problematic enough for Sandernista type Democrats, it should be anathema to non-duopoly leftists — like I think a fair amount of Greens are — ecosocialist lefists. (Unfortunately, many are anarchist Black Bloc types and a few are quasi-libertarian even.)

Politico also called out Yang for bad math. I've called out Santens for far worse math as well as full-on libertarian versions of BI. (Santens wants to junk not just disability payments, but unemployment bennies and even part of Social Security. No, really.)

Going beyond PplsWar, I have also said BI should not be used as the primary fix for gig economy problems. Do that, and you open the door to gutting Social Security next because the self-employed pay both employer and employee portions of FICA tax. Beyond that, many issues with the gig economy have arisen because neoliberal Dems, tacitly, and big-biz and libertarian conservative Republicans, openly, have supported the NLRB cutting rules on who's a contractor and who's not. (I have a new post addressing this in detail that's pending.)

I don't know if Yang, or Gabbard, have been making absurd marketing pitches like Santens that BI will fight climate change, but that too has to be watched.
There is no god and I am his prophet. - SocraticGadfly

Tulsi, Yang, the Yang Gang, and versions of BI