Patos Oghenevwede was flying a tiny Plane on the
last day of his training exercise when the landing
gear of the aircraft refused to engage. Subsequently,
the plane's front wheel refused to appear when
landing at Denton Enterprise Airport in Denton,
Texas so Oghenevwede and his instructor had to
land the plane with only two wheels.
Incredibly, they came out unscathed although the
plane had some bruises. The incident happened on
Friday July 22 2016.
Source: http://www.somtoo.com/2016/07/nigerian-
pilot-patos-oghenevwede-lands.html 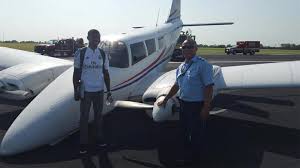 How to Save Money While Travelling?