Communist Youth of Greece (KNE): The Nobel Peace Prize must be awarded to Cuban doctors! 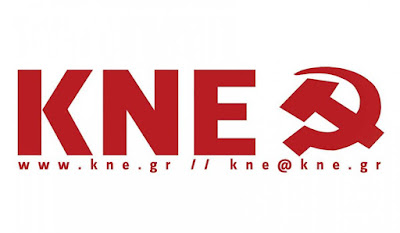 The Communist Youth of Greece (KNE), the youth wing of the Communist Party of Greece (KKE), expresses its support to the campaign that requests the 2021 Nobel Peace Prize to be given to Cuba’s “Henry Reeve International Medical Brigade”.

A Guide to Age of the Gods: The Most …
7 Benefits of Hiring Removalist Babin…
#PrideMonth
Seal Shore campsite
Christian T-shirt Business Spotlight:…
A statement issued by the Press Bureau of the Central Council of KNE points out the following:

“Cuba, with a population of 11 million, blocked for more than 60 years by the criminal embargo of the U.S. and targeted by EU’s multiform interventions, sends once again a powerful message of solidarity and humanitarianism!

In the undeclared war waged by the exploitative system and its governments in all over the world to ensure the profitability of the monopolies, 900,000 people have already “fallen”. In this war, Cuba deploys specialized forces of doctors, nurses and health personnel. The 3,772 heroes of the “Henry Reeve” International Contingent of Doctors Specializing in Disasters have so far treated more than 250,000 people infected with coronavirus in 38 countries, thus saving more than 8,000 lives to date.

“The task of the young communist is: To be essentially human, so human to approach the best of man, through work, study, by maintaining a consistent solidarity with the people and the peoples of the whole world. To develop his sensitivity to the point where he feels anguished when a man is murdered somewhere in the world and excited when a new flag of freedom is raised in some corner of the world”.

With the words, Ernesto Che Guevara, the great revolutionary and doctor, addressed the youth of socialist Cuba with a speech at a ceremony for the 2nd anniversary of the Union of Young Communists in 1962. Decades later, in 2005, in the country where the people, under the guidance of Che and Fidel, took their lives in their own hands, the “Henry Reeve” group of doctors was formed for first time in order to offer help to the people of the USA, just two days after the disastrous “Katrina” hurricane. Since then, this act of solidarity was followed by many more…

Socialism, for us to “breathe” freely, for life to win!

The failure of health systems throughout the capitalist world, the millions of deaths show that the problem is entirely the treatment of health as a commodity, which is sold and bought; it is the barbarity of the system itself. Only the struggle, in our country as well as internationally, for the socialist society, where health and the needs of the people as a whole do not fall into the “balance” of profit, but determine the priorities and choices of central planning, can give “breathe” to the big problems of the people and the youth.

We support the demand of awarding the Nobel Peace Prize to the “Henry Reeve” medical brigade, as a minimum tribute to the Cuban heroic doctors, who are born and bred by the achievements of the socialist revolution." 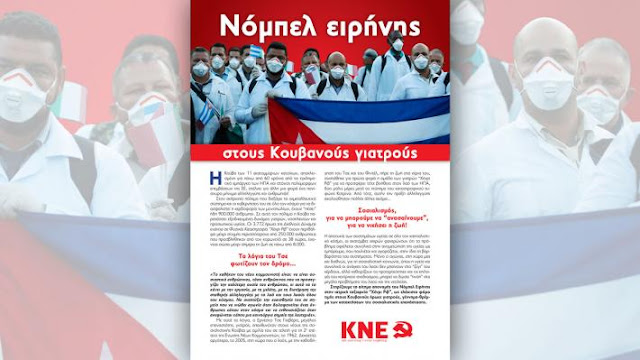 Greek campaign proposal for Nobel Peace Prize to Cuban Medical Brigades to be officially presented in Athens
The Greek campaign to nominate the "Henry Reeve" Medical Brigade for the 2021 Nobel Peace Prize will officially present its proposal in an event which is scheduled to take place on Tuesday 21 September in NewStar Art Cinema in Athens. The event will be attended by the Ambassador of Cuba in Greece Zelmys Maria Dominguez Cortina, who is going to deliver a speech.
The Greek campaign to award the Nobel Peace Prize to Cuban doctors, initiated by the long-time supporter of Cuba Velissarios Kossivakis, is currently the largest of its kind internationally, with more than 75,000 signatures and 500+ personalities from the political, cultural and social spectrum of Greece endorsing the initiative.
The Communist Party of Greece (KKE) has officially voiced its support to the campaign.
IN DEFENSE OF COMMUNISM ©

Communist Youth of Greece (KNE): The Nobel Peace Prize must be awarded to Cuban doctors!