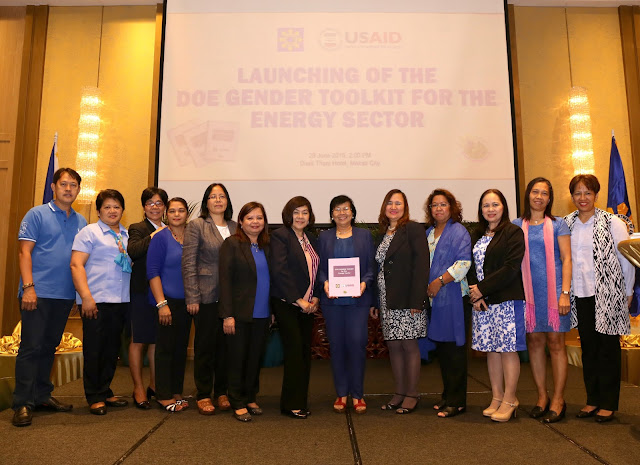 In institutionalizing gender balance and equality, the Department of Energy (DOE) formally launches the “Gender Toolkit for the Energy Sector” on 29 June 2016 at Dusit Thani Hotel in Makati City.

Outgoing Energy Secretary Zenaida Y. Monsada said "the DOE Gender Toolkit is a milestone for the sector and a glorification of my leadership in the agency being the first female Secretary." Relatively, Sec. Monsada has been with the DOE for 37 years and rose from the ranks showing that women are able and capable to perform works related to science and technology, among others.

Moreover, in her speech delivered by Asst. Dir. Carmencita A. Bariso as the Head of Gender and Development (GAD) Focal Point System Technical Working Group, she also said it is "the very testament of our strong desire to pursue gender equality and women empowerment in our workplace by giving emphasis on the many possibilities that women can do."

The DOE recognizes women as competent partners in nation building, particularly in policy and decision-making, through crafting and implementing programs and projects (e.g., Girls and Science, Girls in Science program, Gender Mapping, & various IECs regarding energy safety and efficiency for Households) which are devoted to uplifting not only the female gender’s morale, but also educating the male counterpart of their important role towards the advocacy of gender balance.

The DOE, through the GAD Toolkit, provided a set of guidelines and reference materials to its internal units, attached agencies, and other offices and organizations in the energy sector to make their operations, policies and programs to be more responsive to the gender concerns of their stakeholders.

The toolkit consists of four parts:
1.      The GAD Strategic Framework, which affirms the DOE’s role in providing directives and affirming the commitment of the DOE in providing equal opportunities and participation to both men and Women in the Energy sector as well as protecting and fulfilling their rights.

WWE Monday Night Raw preview and sche…
Cat Coronavirus Diary – Day 5
Kestrel Lodge campsite
Good health and fitness is worth figh…
Wuhan Weather Report
2.      Integrating the twin goals of Gender Equality and Women Empowerment in the energy sector polices, plans, programs, and projects.
3.      The GAD Checklist, which serves as filter and rating worksheet for assessing the gender sensitivity or responsiveness of the program/project design.
4.      Mainstreaming gender equality and women empowerment perspectives in the operation and main mandates of the DOE, its attached agencies, and other energy offices.
The toolkit was developed through the collaborative efforts of the energy Gender and Development-Focal Point System (GAD-FPS) and the Philippine Commission on Women, and the United States Agency for International Development (USAID). It has also two soft launches, in which one was at the 60th Session of the United Nations Commission on the Status of Women held at the UN Headquarters in New York last March, and the other was at the H2O Hotel in December 2015.

Anchored on the Republic Act (R.A.) 7192 otherwise known as The Women in Development and National Building Act and R.A. 9170 on the Magna Carta for Women, the DOE-GAD program is implemented nationwide given the annual allocation of five percent (5%) of its budget under the General Appropriations Act since 1995.

Projects under DOE-GAD program include the renewable energy projects in collaboration with the Affiliated Renewable Energy Centers in state universities; information, education and communication campaigns in various local government units discussing energy safety, and efficiency, capacity building on gender sensitivity and mainstreaming, and projects to increase awareness among high school students on science subjects and encourage them to take up college course relevant to energy.