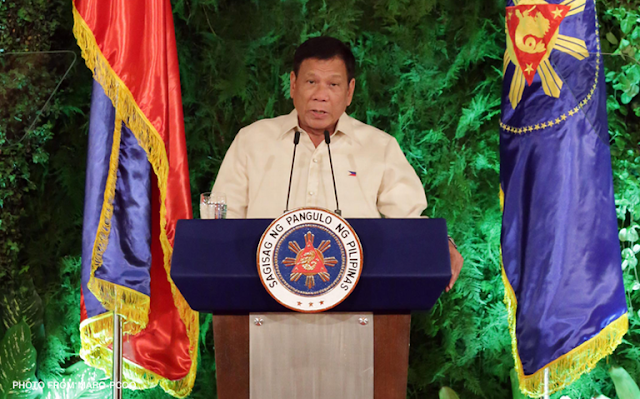 Here is the full Inaugural address or spreech of President Rodrigo Duterte during his Oath-taking of the President of the Philippines in Malacañang Palace on June 30, 2016:

No leader, however strong, can succeed at anything of national importance or significance unless he has the support and cooperation of the people he is tasked to lead and sworn to serve.

It is the people from whom democratic governments draw strength and this administration is no exception. That is why we have to listen to the murmurings of the people, feel their pulse, supply their needs and fortify their faith and trust in us whom they elected to public office.

There are many amongst us who advance the assessment that the problems that bedevil our country today which need to be addressed with urgency, are corruption, both in the high and low echelons of government, criminality in the streets, and the rampant sale of illegal drugs in all strata of Philippine society and the breakdown of law and order. True, but not absolutely so. For I see these ills as mere symptoms of a virulent social disease that creeps and cuts into the moral fiber of Philippine society. I sense a problem deeper and more serious than any of those mentioned or all of them put together. But of course, it is not to say that we will ignore them because they have to be stopped by all means that the law allows.

Indeed, ours is a problem that dampens the human spirit. But all is not lost.

I have seen how corruption bled the government of funds, which were allocated for the use in uplifting the poor from the mire that they are in.

I have seen how illegal drugs destroyed individuals and ruined family relationships.

I have seen how criminality, by means all foul, snatched from the innocent and the unsuspecting, the years and years of accumulated savings. Years of toil and then, suddenly, they are back to where they started.

Look at this from that perspective and tell me that I am wrong.

In this fight, I ask Congress and the Commission on Human Rights and all others who are similarly situated to allow us a level of governance that is consistent to our mandate. The fight will be relentless and it will be sustained.

I know that there are those who do not approve of my methods of fighting criminality. They say that my methods are unorthodox and verge on the illegal.

My adherence to due process and the rule of law is uncompromising.

You mind your work and I will mind mine.

“Malasakit. Tunay na Pagbabago. Tinud-anay nga Kausaban (Compassion. Real change.)” – these are words which catapulted me to the presidency. These slogans were conceptualized not for the sole purpose of securing the votes of the electorate. “Tinud-anay nga kabag-uhan. Mao kana ang tumong sa atong pang-gobyerno (Real change. This is the direction of our government).”

Far from that. These were battle cries articulated by me in behalf of the people hungry for genuine and meaningful change. But the change, if it is to be permanent and significant, must start with us and in us. [applause]

To borrow the language of F. Sionil Jose, we have become our own worst enemies. And we must have the courage and the will to change ourselves.

As a lawyer and a former prosecutor, I know the limits of the power and authority of the president. I know what is legal and what is not.

Love of country, subordination of personal interests to the common good, concern and care for the helpless and the impoverished – these are among the lost and faded values that we seek to recover and revitalize as we commence our journey towards a better Philippines. The ride will be rough. But come and join me just the same. Together, shoulder to shoulder, let us take the first wobbly steps in this quest.

There are two quotations from revered figures that shall serve as the foundation upon which this administration shall be built.

My economic and financial, political policies are contained in those quotations, though couched in general terms. Read between the lines. I need not go into specifics now. They shall be supplied to you in due time.

However, there are certain policies and specifics of which cannot wait for tomorrow to be announced.

I order all department secretaries and heads of agencies to refrain from changing and bending the rules government contracts, transactions and projects already approved and awaiting implementation. Changing the rules when the game is on-going is wrong.

I abhor secrecy and instead advocate transparency in all government contracts, projects and business transactions from submission of proposals to negotiation to perfection and finally, to consummation.

Do them and we will work together. Do not do them, we will part sooner than later.

On the domestic front, my administration is committed to implement all signed peace agreements in step with constitutional and legal reforms.

I am elated by the expression of unity among our Moro brothers and leaders, and the response of everyone else to my call for peace.

I look forward to the participation of all other stakeholders, particularly our indigenous peoples, to ensure inclusivity in the peace process.

Let me remind in the end of this talk, that I was elected to the presidency to serve the entire country. I was not elected to serve the interests of any one person or any group or any one class. I serve every one and not only one.

That is why I have adapted as an article of faith, the following lines written by someone whose name I could no longer recall. He said: “I have no friends to serve, I have no enemies to harm.”

On the international front and community of nations, let me reiterate that the Republic of the Philippines will honor treaties and international obligations. On the domestic front, my administration is committed to implement all signed peace agreements in step with constitutional and legal reforms.

Prescinding there from, I now ask everyone, and I mean everyone, to join me as we embark on this crusade for a better and brighter tomorrow.

But before I end, let me express the nations, on behalf of the people, our condolences to the Republic of Turkey of what has happened in the place. We offer our deepest condolences.

Why am I here? Hindi kasali ito diyan (This is not part of my speech). The past tense was, I am here because I love my country and I love the people of the Philippines. I am here, why? Because I am ready to start my work for the nation.

Thank you and good afternoon.