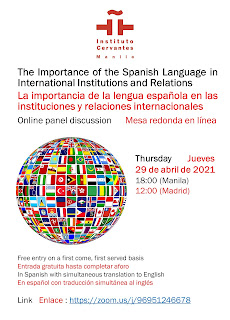 On Thursday, April 29, at 6pm, Instituto Cervantes de Manila will be holding an online panel discussion about the role of Spanish in international institutions and relations. Titled “La importancia del español en las relaciones internacionales", this event will bring together four ambassadors to discuss the importance of Spanish in global institutions and its weight in international relations.

Last April 23 was not only the International Book Day but also the day of the Spanish Language, a commemoration declared by the United Nations in 2010 to highlight the global relevance of Spanish, which even Google celebrated with a special doodle featuring the characteristic Spanish letter “ñ”.

The discussion will be conducted in Spanish but simultaneous English interpretation will be available. Admission is free and open to all on a first come, first served basis. The link to access the event is https://zoom.us/j/96951246678.