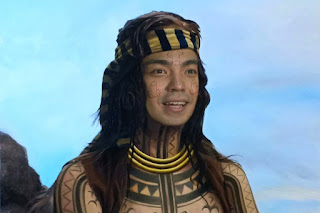 Jolo Revilla issued an apology on Tuesday afternoon after he mistakenly identified Lapulapu as Ferdinand Magellan on social media.

"I apologize for the earlier confusing post on our celebration of Lapu-lapu's victory in Mactan 500 yrs ago.

Oil Palm Farming
What I Remember from 5th & San Pedro

An intern in our social media team posted the caption to our meme without first clearing it.

Again, my sincerest apologies to our Cebuano kababayans and to all Filipinos." 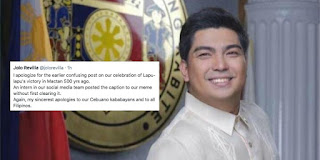 It would have been better if the apology did not place the blame on the intern.

Politician to the highest level. No accountability at all. Free to blame anyone of his mistake. It's like: I'm sorry...kasalanan kasi niya, pero sorry pa rin. lol 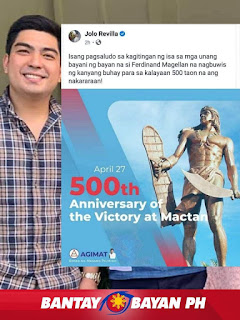 Senator Bong Go also apologized for wrongly claiming Lapulapu was from Sulu. He says  it was his staff who included the wrong information in his address for the 500th anniversary of the Battle of Mactan.

Sige basa.... kiss ass...play photographer..and personal assistant to the president. That's what you are good at.

If the city government could easily plan on declaring a rapper like EZ Mill persona non grata for his lyrics saying Magellan killed Lapu-Lapu, I invite the mayor to do so on Bong Go for saying Lapu-Lapu was a Tausug.

As for Jolo Revilla, he could have stopped blaming his intern. Come on. You are still responsible for the faux pas. Man up and say you are truly sorry....without putting the blame on somebody else. 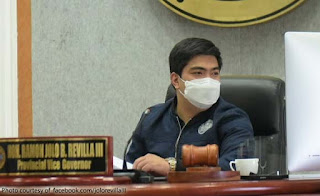 It's your account. Regardless if you have an admin or not to manage it, take ownership. That's what a true leader does. Not finding someone to pin the blame on. Regardless if it was true. Our social media posts should be our responsibility. Granted we can use social media managers to ease our tasks, we still are responsible to check the content for accuracy and completeness.

When a message bears your name, own it up! It shows the type of leader you are Jolo Revilla! Cavite doesn’t deserve you! They deserve someone better with command responsibility.

I feel sorrry for the supposed “intern” who had to take the fall, if there’s really one. And most importantly, never ruin an apology with an excuse. Just apologize and sit down.

Never ruin an apology with an excuse. 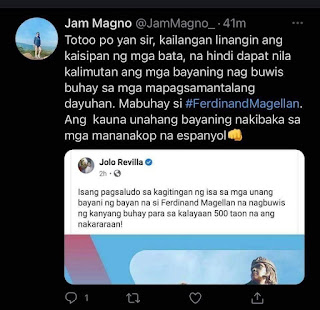 I told myself I'll let go of that Jolo Revilla fiasco. Then, Jam Magno happened.

And I just love to see someone to eat their own words.Please be enlightened that is a fake account. The official account is @thejammagno.

From the same mouth that uttered the words, "basketball muna bago droga"

The NHCP issues a statement on the origin of #Lapulapu and other details of his life. 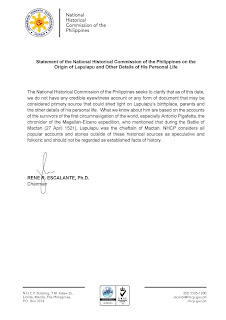 Not surprising since they do have stupidity in their history. Kanino pa ba magmamana?

When we vote people that is not rooted and responsive in the community, we got the likes of Bong Go or Jolo Revilla.

Gising Pilipinas, separate your obsession with popular clowns when votingfor politicians to run our government. This is not a joke. Think of our country's future. We put the country in chaos when we put these clowns in our government.

Apologizing with blaming on the sides is humility.... pinpointing to blame others? That is definitely unbecoming of a public servant!!! He didn't own the mistake, instead he point on his intern... worst trying to make a "meme" for an extra ordinary fact on Philippine history?? 'Cmon??!!! It wasn't a meme , it was a gaffe.

And if it was a meme.. that’s also uncalled for in a public official to make fun of our national heroes. Shame on you, Jolo Revilla!

And when you thought it's only Jolo Revilla and Bong Go, here comes another clown from Malacañang: 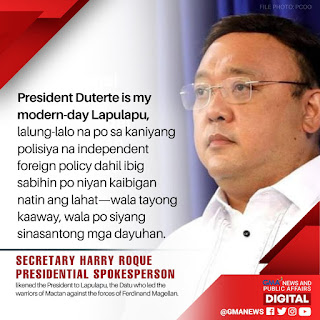 We are so used to hearing our heroes die that this mistake is not really that surprising.

We consider death to be the "only" way to be a "bayani", that it is forever immortalized in the last line of our national anthem.

Well, in the first place, in was said that Lapulapu wasn't really defending the "Philippines".The concept of a united archipelago as one nation did not yet exist (ironically Spain invented that concept)Lapulapu simply fought for his tribe against a rival chieftain (Humabon) w/ whom Magellan teamed up.

My hero of the day for saving everybody's day with a simple history telling that even bong go and jolo revilla can learn!