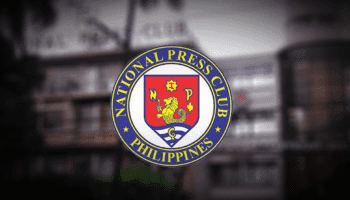 THE National Press Club of the Philippines (NPC) believes that the exercise of press freedom in particular, and the freedom of expression in general, have not been affected nor threatened with the finding of the Securities and Exchange Commission (SEC) that online news platform Rappler, Inc., violated the strict constitutional provision on 100 percent control and ownership of mass media and its decision to close down the media outfit.

“The NPC purposely delayed issuing its statement on the matter until it has read the entire decision of the SEC in order for it not to be swayed by the prevailing emotion of the moment.

“As the country’s oldest and biggest organization of active media practitioners, the NPC is conscious that making a statement on this issue demands that it first study the SEC decision,” Gutierrez said.

“And going thru the 29-page decision, the SEC finding is quite clear: that Rappler Inc., has indeed violated the law when it allowed the entry of foreign investors and also allowed, specifically, Omidyar Network Fund LLC, to have control on ‘corporate matters’ of Rappler based on its own submissions to the SEC,” said NPC president Paul M. Gutierrez.

The SEC report, he added, clearly stated what was provided for in our Constitution and related laws and which Rappler also clearly violated:

“Where mass media is concerned, no (foreign) control whatsoever may be granted. 100 percent Filipino control means zero (“0”) foreign control. ‘Control’ is any influence over corporate policy, and not limited to ownership of stock.”

“As the SEC noted, Rappler breached this constitutional limit when it allowed Omidyar to exercise control over its corporate affairs as provided for in their internal agreement, in exchange for a fund infusion of US$ 1 million dollars,” Gutierrez noted.

“Responsible journalism also means complying with the law,” Gutierrez said, adding the Club’s position is also consistent with its policy of not accepting as members, journalists and media entities of dubious legal personality.

“By way of policing our ranks and as part of our continuing reform drive, the NPC has long ago made it a policy that those applying for membership should represent not only credible, but also, legally established media entities.

“In this case, we cannot be swayed by the emotion of the moment and go along with the general sentiment that press freedom has been threatened less we be accused of inconsistency,” Gutierrez said.

He also noted that it is premature to say that freedom of the press has been curtailed as a result of the SEC’s findings against Rappler.

“In the broader Philippine media industry, Rappler is just one among the thousands of media entities in the country and whose operations have remained free,” he said.

“There are about 436 television broadcast stations, 411 AM radio stations, over 1,000 FM radio stations and more than 400 newspapers today operating freely in the country besides those now that have proliferated in social media and whose actual number no one really has any idea.

“To say that the fate of one media entity found to have run afoul with the law translates to media repression in the country is stretching the argument a bit too much,” Gutierrez said.