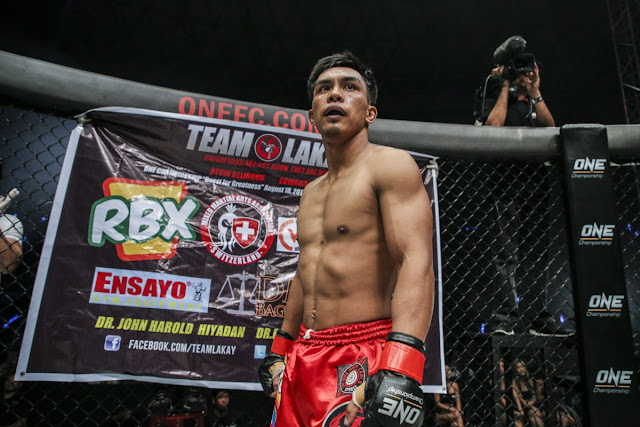 For the past three outings of Kevin “The Silencer” Belingon inside the ONE Championship cage, the Filipino mixed martial artist has proven himself as the next worthy contender for the coveted ONE Bantamweight World Championship.
Ever since unsuccessfully challenging Bibiano Fernandes for the gold-plated strap in January 2016, Belingon has run through his recent opposition by piling up three-straight stellar victories.
Following his submission setback to Fernandes, Belingon took several months off before re-emerging in October 2016 by handing top Tajik prospect Muin Gafurov his second professional loss via unanimous decision.
Belingon followed it up with an astounding knockout conquest of Finnish dynamo and former title contender Toni Tauru last April in front of a sold-out crowd at the 20,000-capacity SM Mall of Asia Arena in Manila, Philippines.
In his most recent bout, Belingon showcased another epic performance by notching a first-round knockout win over fellow ex-title challenger Reece “Lightning” McLaren last August.
After picking up an emphatic victory over McLaren, it appeared that Belingon was on his way to a second encounter with Fernandes.
However, Belingon is having a slight detour towards his goal to meet Fernandes again as he has been booked to face Korean-American standout Kevin “Old Boy” Chung in a three-round affair on the undercard of ONE: LEGENDS OF THE WORLD, which takes place at the 20,000-seater SM Mall of Asia Arena in Manila, Philippines on 10 November.
For Belingon, his cage showdown with Chung is an opportunity to make a truly impressive statement as his objective is to score a rematch with Fernandes for the organization’s bantamweight title.
“Make no mistake about it, my performances in the cage as of late are a message to the organization and to the reigning ONE Bantamweight World Champion. I am coming for that belt, and no one can stop me. Whoever they put in front of me, I will be looking to destroy. I am a man on a mission,” he stated.
According to Belingon, defeating Chung in decisive fashion may strengthen his bid to get a rematch with Fernandes.
“My mindset remains to showcase my skills and remain focused on executing the game plan. My team and I have devised a tremendous strategy in dealing with my next opponent. Even though I have scored some recent knockouts, I am not going in there recklessly,” he explained.
“If at any point I sense my opponent is ready to go, and the knockout presents itself, I am like a shark in a fish tank. There is no doubt I will go for the finish, and I will end matters quickly. I will strike my opponent until the referee pulls me off him,” Belingon added.
It seemed to take the 30-year-old Baguio City native a while to realize just how merciless his striking power is.
Despite running at breakneck speed to 9-0 at the start of his professional career, the Team Lakay bantamweight was not a renowned knockout artist.
But since signing with ONE Championship in 2012 and focusing on his training regime in the mountain region of the Philippines, five of his seven victories have come by way of knockout.
“I have bolstered my training, working on all areas of my game from striking to grappling,” Belingon shared.
With his Wushu background honed under Mark Sangiao, Belingon is as lethal as the nickname suggest as he is fast, destructive and goes for the clean shot.
Belingon is literally punching his way to a second title opportunity against division kingpin Fernandes, having recently knocked out two former world title challengers in the very first round.
“I want to show everybody that I am the real title challenger-in-waiting. I have realized my mistakes in my first encounter with Bibiano, and I have worked hard to erase those flaws. He is a great world champion, but I feel things will go differently if we ever meet again. The time will come when I will be able to showcase my improvements,” he stressed.
Although vying for the ONE Bantamweight World Championship title remains as his top priority, Belingon clarified that his current focus is fixed on his date with Chung at ONE: LEGENDS OF THE WORLD.
“My opponent is not easy, and I am not taking him for granted, which is why I am completely focused on my upcoming bout this November 10. This is a dangerous game we play, and we cannot underestimate anybody. I need to be at my absolute best so I can turn in another great performance for the fans. Competing in front of my hometown crowd, the pressure is on to score another huge victory,” he declared.
The stakes are incredibly high for Belingon, unveiling that he is preparing himself to be in the best shape of his life.
Belingon knows that each win from here on out is another step closer to the ONE Bantamweight World Championship belt.
“I know I will meet Bibiano again in that cage, and when that day comes, I need to be prepared. There is not a day that has passed that I have not thought about that first bout. But for now, my objective is to win against Kevin Chung on November 10,” he ended.

Top 10 Biggest Blackjack Jackpots
Exclusive Interview With Ankit ‘V3nom…
Ski Holidays in Switzerland: How to P…
The Best Books For Kids About Racism …
WWE Raw women’s champ Becky Lynch ann…
​For more updates on ONE Championship, please visit www.onefc.com, follow us on Twitter and Instagram @ONEChampionship, and like us on Facebook at https://www.facebook.com/ONEChampionship.