Kevin Chung Kooks to Seize Opportunity of a Lifetime at ONE: LEGENDS OF THE WORLD 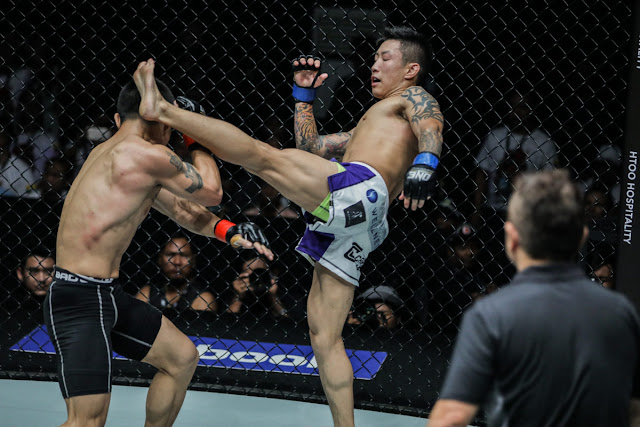 Kevin “Old Boy” Chung may be a fresh face to ONE Championship, but the promotional newcomer showed his immense talent and had an impressive debut this past June.

The 24-year-old Korean-American standout kicked off the main card of ONE: LIGHT OF A NATION with an exciting performance, defeating Chinese grappling ace Zhong Qing Ya via second-round technical knockout in their catchweight contest.

Chung got the job done in the second round, where he landed crisp punches and kicks from side control, and when Zhong turtled up, “Old Boy” took advantage of the position and delivered a pair of knees to the head.

It was all over from there as veteran referee Yuji Shimada stepped in and called a halt to the bout to award the stoppage victory to Chung.

Chung is taking the greatest risk of his budding young career in his next trip to the ONE Championship cage as he has an opportunity to establish himself as one of the premier bantamweights under the promotion’s banner.

In his upcoming bout, Chung is set to test his mettle with former world title contender Kevin “The Silencer” Belingon on the undercard of ONE: LEGENDS OF THE WORLD, which takes place at the 20,000-seater SM Mall of Asia Arena in Manila, Philippines on 10 November.

“I am super excited to visit the Philippines and put on a show. I know I am in his backyard, but I have no pressure on me like I did when I competed locally. It is going to be a wild night,” Chung said.

With a professional record of 16-5, Belingon is known as a fierce competitor with the ability to finish opponents in a variety of methods.

Moreover, the 29-year-old Baguio City native owns seven huge knockouts on his resume and is one of the most feared strikers in ONE Championship’s deep bantamweight division.

Although a mere glance at their records shows a sizeable gap in experience between the two bantamweights, Chung is confident in his own talent.

“To the common eye, it may be a mismatch on paper due to records and experience. But I am confident in my skills and feel like this is my time. Anything can happen, and I have the skills to finish him,” he stated.

Chung believes that great risks result to great rewards as a decisive win over Belingon could instantly catapult him into a championship clash with division kingpin Bibiano “The Flash” Fernandes.

“I am not looking past Belingon and am just focused on the task at hand. However, when my hand is raised, I would like to challenge Bibiano Fernandes in Korea,” he expressed.

Like Chung, Belingon is looking to get a crack at Fernandes’ ONE Bantamweight World Championship once again, separating himself from the rest of the weight class’ pack with his three-bout winning streak.

Even though Belingon has the upper hand in the striking department, Chung has no qualms when it comes to trading kicks and punches with the ferocious Filipino striker.

“A lot of people will look at us and say he has the striking advantage. But I have a slight height and reach advantage,” he explained.

“I feel like I can stand with him. A lot of guys do not believe they can and look to wrestle, but I think I can hurt him on the feet. It is a great feeling knowing that. If there is any point in the bout when I am in trouble, I know that I have other weapons to go to,” Chung added.

Chung asserted that he has a fair share of knowledge in terms of delivering blows from a toe-to-toe stance, but if the marquee match-up hits the canvas, he is prepared to exploit the Filipino foe’s perceived vulnerability.

“I know what his weaknesses are. I am sure he is working hard to correct that. Learning the proper mechanics of BJJ takes longer than a few months. Once we get in there and start throwing hands and it hits the ground, he is going to see that,” he mentioned.

With a gritty opposition in front of him, Chung stressed that he is motivated to shock the world at ONE: LEGENDS OF THE WORLD.

“It will be a barnburner, and I promise it will be the bout of the night. I will knock Belingon out within the time allowed,” he ended.

Kevin Chung Kooks to Seize Opportunity of a Lifetime at ONE: LEGENDS OF THE WORLD