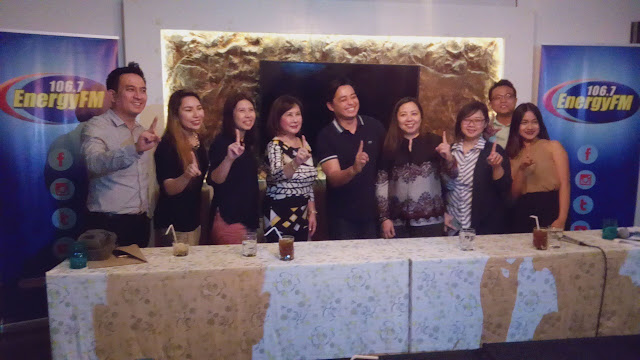 After all the confusion, mixed with excitement, John Gemperle, widely known as Papa Jack, sat down alongside Energy FM executive Rebecca Ann Sy. The contract signing happened in PBA Cafe, Metrowalk on March 17, 2017. He will be on air from 9pm to 1am, starting Monday - March 20, 2017.

John was a former DJ of Love Radio. It was such a surprise when he announced with sadness his final airing date last December 22 from his 12 year relationship with Manila Broadcasting Company. Afterwhich, he enjoyed 3 months of vacation, and just recently looked for a job.

As he defines it, he was not really looking for a job, he was looking for an employer. Luckily, Energy FM appeased his longings for a new home. He did not declare much of his new paycheck, but subsequently, he says it would suffice to take care of him, his daughter, and his 4 dogs.
Hello, STG - following his standard formula on the question of letting go; will be his segment in his 9pm-1am slot. STG stands for Sorry, Thank you, and Goodbye. "It will be the same banana," Papa J says, when he was asked of the program's format.

Papa J, would then want to reiterate, that though he is seen as the DJ who gives love advice, his talent is listening. It is pretty ironic but that's what works.

When asked, why Energy FM opted to get John as their new DJ, Rebecca Sy shared that the radio station's passion is aligned with what Papa J has.

Papa J is very happy now. He would love to thank his supporters, the brands that believed in him, and everyone who contributed to what he is today. We wish him all the best in his newfound family.

His name is that of a household name, that equates to "Love advices". He will continuously do this with his new home - 106.7 Energy FM.

Bonus: Energy FM shared that Papa J's bestfriend - Chico Loco, will join the family come mid May. This gets exciting.