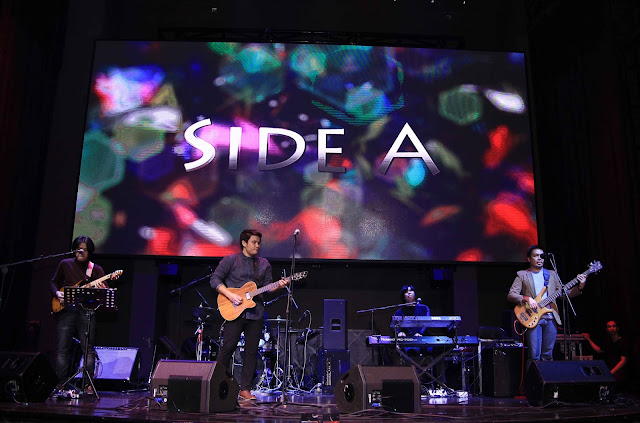 Wazzup Pilipinas!
Stellar local bands of the 90s perform every Wednesday, 9pm at Chaos Night Club at City of Dreams Manila this December. Upcoming performances at the trendsetting nightclub include Freestyle and M.Y.M.P. on December 21, and Side A band together with Kudos Loves 80s on December 28.

Chaos nightclub has hosted a number of world-class performers including prominent international DJs from a wide spectrum of electronic dance music sub-genres, as well as popular hip-hop and R&B artists on weekends. Wednesday nights are currently dedicated to locally-renowned homegrown talents who continue to elevate music to a whole new level.
Freestyle
Freestyle fans will be treated to a live performance of the band’s memorable hits such as “So Slow”, “This Time” and “Bakit Ngayon Kalang?”  Ushering a new era for Freestyle is the fresh voice of Ava Santos, who's behind a series of popular Ivory Records' acoustic albums: Love Songs Unplugged 6,7,8; Praise & Worship Unplugged, Chill Out Sessions and Whitney Houston Acoustic. With continuing members, Gerald Banzon (drums), Rommel dela Cruz (bass), Tat Suzara (guitar), Mike Luis (vocals and keyboards), and Joshua Desiderio (vocals and keyboards) the collaboration with the new vocalist resulted into a powerhouse of rich harmonies, and robust music, flavoring their cool mix of old and new school R&B, Hip Hop, funk, neo soul and ballads.
Freestyle is currently promoting their latest independent album: Mga Kwentong Kinanta. The album showcases original compositions including "True Love", "Kahapon", and “Kulang Ang Mga Sandali".
M.Y.M.P.
On the same night of Freestyle’s show, M.Y.M.P. will also perform some of their most popular acoustic rendition of pop songs. M.Y.M.P. (Make Your Momma Proud) acoustic band is comprised of Chin Alcantara (guitar/vocals), Jana Laraza (vocals), Ibey Haber (bass), Hannche Bobis (keyboards) and Joel Tolentino (drums). The band has released 7 studio albums namely Soulful Acoustic, Versions, Beyond Acoustic, New Horizon, Now, The Unreleased Acoustic Collection and Electrified.
During the last Wednesday of December, Side A band and Kudos Loves 80s will perform alternately on stage for a last hurrah to 2016.
Side A
Music lovers will swoon over the classic OPM tunes as Side A performs their 90’s greatest hits such as “Forevermore”, “So Many Questions” and “Before I Let You Go.”
Having undergone several permutations in its long career, South Border has nevertheless retained its unique sound and musical sensibility and has even moved up along the current global trends in music. Hence, retaining the top spot in their particular musical genre. Much credit goes to keyboardist, chief songwriter, arranger, producer and musical director and lead creative genius Jay Durias, the staunchest unifying force that has kept the band and its music alive and thriving.Side A band composed of Naldy Gonzalez (keyboard/vocals), Ernie Severino (drums/vocals), Leevon Cailao (lead guitar/vocals), Ned Esguerra (bass/vocals) and Yubs Esperat (vocals/guitar) will captivate Chaos nightclub patrons with their original songs that bring back a lot of memories. Known for their romantic ballads and up-beat live performances, the group never stops reinventing themselves and have worked hard to give their very best in both recordings and live concerts. As multi-awarded and certified platinum recording artists, Side A is considered as the most durable band in the country today and continues to be an ever-innovative musical force in the industry.
Kudos Loves 80s
Guests can go back further in time and relive the heydays of their lives with Kudos Loves 80s band, the ultimate 80s tribute band in Manila. Partygoers will be amazed with the band’s faithful renditions of the most beloved 80s songs from pop, love songs, dance hits, synth-pop to new wave.
Kudos Loves 80s band members are Richard Soto (Vocals/Guitar/Percussion), Yohan (Guitar/Synth/ Vocals), Marc (Drums/Percussion), Ralph (Bass/Vocals), Jomar (Keyboards/Vocals), and Melai Katsumi (Vocals). The band will perform the music of The Police, Tears for Fears, Mike Francis, New Order, Big Country and other 80s popular bands.
Tickets to see the live band performances every Wednesday at Chaos are at P400 each with one (1) drink. For VIP table reservations, guests can call 0917-8863678 or e-mail [email protected].