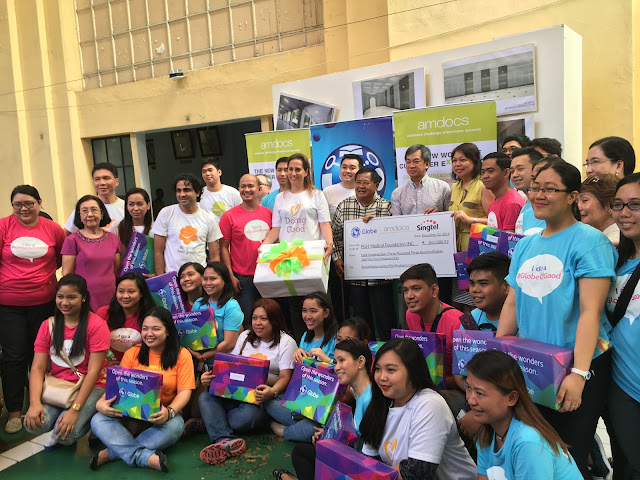 The cost of renovation, which is P863,380.52 will be turned over to the PGH Medical Foundation, Inc., a non-government organization founded in 1997 which acts as the fund-raising arm of PGH.

Amdocs and Singtel donated P200,000 and P100,000, respectively, as part of their corporate social responsibility efforts while the rest came from Globe employees and customers.

This was in response to a call made by Globe to its employees, partners, and customers to share their time, treasure, and talent in bringing cheer to the young cancer patients in PGH and in helping raise funds for the clinic. PGH currently serves about 600,000 patients annually, about 80 percent of which are indigent.

“We are proud to have our partners, employees, and customers step in to participate in this worthwhile undertaking. We continue to encourage everyone to work together so that through this project, we can all bring hope to the patients at the PGH pediatric cancer clinic,” said Yoly Crisanto, Globe Senior Vice President for Corporate Communications.

Earlier, Globe launched a heartwarming video in line with the premiere of the latest Star Wars movie franchise Rogue One: A Star Wars Story. The video garnered over 40 Million views and was recognized by international news sites such as CNN, Mashable, and Huffington Post among others. The video strongly demonstrated the resilience of children in face of adversity and encouraged the audience to help in the rehabilitation of the PGH Pediatric clinic via donations through prepaid load or charged to their postpaid bill.

Globe always tries to give back to the communities where it operates, thus, PGH was chosen as the beneficiary of the project. Manila, where PGH is located, was the first local government unit to cooperate in removing the hurdles in infrastructure building, thereby, allowing the deployment of fiber optics in Binondo for ultra-fast internet access.

Those interested to help may still donate denominations of P100, P200, and P500 from their prepaid load or postpaid plan via SMS by texting PGH to 2158-0744 (PGH) or by using their GCash Android App and following the instructions given.

The Day Cancer Entered My Family.